Day Two of Shaky Knees drew and even bigger crowd than Day One, and offered more excellent music options for fans to pursue.... 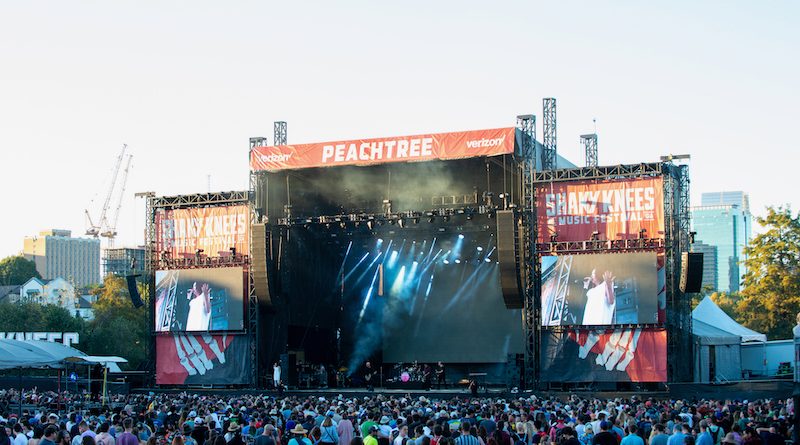 Shaky Knees Festival was held in Atlanta, Georgia from October 22nd thru the 24th, instead of the typical May dates, due to the pandemic.

Last year’s Shaky Knees was cancelled entirely; a casualty of COVID, leaving thousands of music lovers in the Southeast starved for their beloved festival and its array ire of music performances.

This year’s “SK” was one of its best. Right from the beginning, there were thousands of people flocking into Atlanta’s Central Park as soon as gates opened on Friday. All were hoping to secure a good spot and a concert T-shirt for their favorite bands. The line at the Merchandise tent never wavered throughout the weekend, as fans sought the treasures held within.

Atlanta has very pleasant weather in the fall, making it so much more comfortable than the usual “SK” May festival weather, where temperatures can reach up to 90 degrees. This may explain the high energy of the crowd this year.

Although Run the Jewels was on the main stage on Saturday night, and acts like Living Color and Arlo Parks were featured, the festival could have benefited with a more diverse line-up that could also attract a more diverse set of attendees. What it lacked in diversity, however, it certainly made up for in positivity. There was a band or artist for just about every preference.

The organizers did a great job of attracting a multiplicity of genres and styles. From the melodic to the heavy, but never aggressive. Since Friday was the first day of the festival, fans began by exploring the park to plan their schedules, ensuring their presence at their favorite artists’ performances.

Once acclimated, concertgoers appeared to be moving in herds, as they made their pilgrimages from stage to stage, hoping for a good glimpse of their musical heroes or new discoveries.

Day Two of Shaky Knees drew and even bigger crowd than Day One, and offered more excellent music options for fans to pursue. The weather continued to be kind to the festivalgoers, though a bit sunnier and warmer than the previous day. This caused a literal “dust up” in certain areas of the park, kicked up by the many fans walking through the well-worn paths.

Saturday’s Shaky Knees offered what was, arguably, the greatest variety of musical styles of the entire festival – matched only by the variety of appetizing fare; from jalapeno corndogs, to classic burgers, to chicken-bacon quesadillas and chocolate-drizzled funnel cakes. Each venue provided a sound (and a snack) for every taste.

Neil Francis played a fun and uplifting set with songs from Changes, his first album, and his latest, In Plain Sight. He and his band brought the funk, pop, R&B, psychedelic and even a whiff of disco – all inspired by the 1970s. He would have looked at home with any glam rocker of that era, as he threw his head from side to side bouncing his carefully-coiffed long “shag” to the beat as he played the keyboard. All-in-all a “groovy” good time!

Garbage was anything but. Shirley Manson and crew played at the main stage in the early evening, and were as sharp and strong as ever! Manson is a funny and feisty frontwoman. She was in great voice, and thoroughly engaged the audience. Their excellent cover of “Your Own Personal Jesus” was one of the highlights of their performance – in addition to their many hits. [note: the band did not allow photography]

Next up, were The Hives, certainly one of the most fun acts of “SK.” This “Fab Five” arrived on stage in white dinner jackets and black tie, ready to put on a show. This Swedish band (clearly influenced by U.S. garage-rock) knew how to whip-up their many fans with a guitar-heavy, pop-infused sound. Working the crowd became an artform in the hands of their charismatic leader; “Howlin’” Pelle Almqvist, by far the cockiest Swede most of us will ever encounter. There is a word in Swedish called “Lagom.” It can be translated into, “just the right amount,” “in moderation”, or “perfectly-simple.” These guys are NOT “Lagom” (and that’s a great thing!).

Portugal. The Man delivered an impressive set, with much more of a heavy sound than most fans may have anticipated. With a bizarre and artfully-animated projection behind them, they wove a unique web of music, from their biggest hits, like “Feel It Still,” and “Modern Jesus” and some unexpected gems, like a cover of Nirvana’s “In Bloom”. The band set a mood that delighted festivalgoers, who gave them their rapt attention.

Then, came the “Sophie’s Choice” of the evening: Music lovers were forced to choose between the rock legend, Alice Cooper (a spry 73 years old ), and the dynamic, soon-to-be punk gods IDLES. For one of the smaller stages, IDLES played it big! These Brits were pure energy; from the angry, yet exuberant essence of lead, Joseph Talbot, to the frilly-dress-clad guitarist, Lee Kiernan, who immediately jumped into the crowd, IDLES exuded head-banging, subversive power that was openly embraced by their crowd-surfing, nearly-rabid fanbase.

At the same time, on the other side of the park, septuagenarian Alice Cooper had thousands of fans willingly partaking of his “Poison”. Say what you will, but Cooper is nothing if not a showman. He brings his still-strong, dynastic rock to people a quarter of his age, who still hang on every lyric and lick. He ended, ironically, with a huge, inflated (and disturbing) rock “baby” who menaced the stage, while Cooper “battled” him into submission.

The icing on the cake was Run the Jewels, who took the main stage at 9:45 PM. Atlanta-based “Killer Mike” and Brooklyn native, “El-P” immediately enthralled the impressive audience with their clear chemistry and hip-hop pedigree. The bass moved the crowd (literally, if you were standing in proximity of the enormous speakers), and these experienced showmen knew just how to excite their fans (and even gave a “shout-out” to the pit photographers). Their sometimes angry, but always ebullient lyrics played well in the space, particularly with numbers like “Legend Has It” and “Ooh La La”. It was oblivious that the duo was happy to be back in “Atlanta-fucking-Georgia” (as Killer Mike put it).

Strand of Oaks – In Heaven