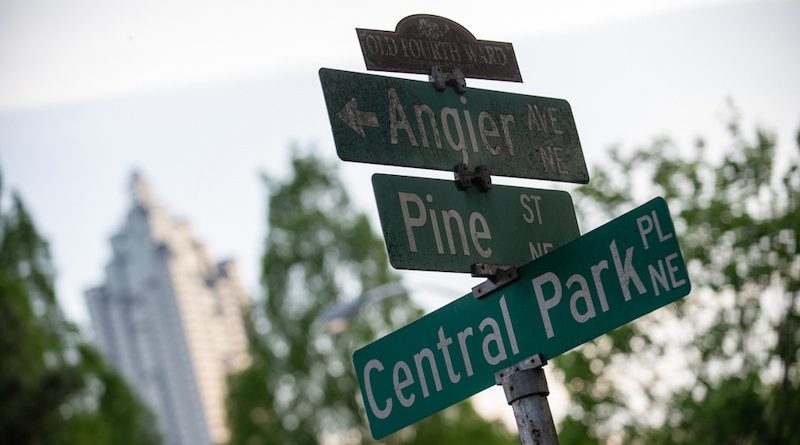 Shaky Knees 2022 started on a glorious day in April and ended on an equally glorious day in May, offering three days of music, culture and fashion. Atlanta’s Central Park once again hosted this successful music festival, as it has since 2013 when the gathering began – and with cooperative (and beautiful) weather – it couldn’t have been more perfect.

The festival venue is divided into four stages, from smaller to larger – two on each side of the  park, where music fans can easily move from one section to another, with a fairly sizable food and beverage area between them, serving everything from gluten-free pizza to acai bowls, and a large variety of beer and spirits (not to mention, a hydration tent).

For the eighth year, each day of the musical celebration began with a “Songs for Kids” concert. This presentation showcases the talented young singers and songwriters from the Atlanta area, there to entertain a surprising number of children who accompany their parents to the festival. As the days wore on, however, the crowd became decidedly more mature.

After several lesser-known options, Spoon was the first of the more well-established bands to perform on Friday. They were featured at the second-largest Piedmont Stage, and attracted a big crowd who didn’t leave disappointed. Not only did lead singer Britt Daniel, and his band sound great, but they looked great too – the years appear to have been kind. As they played their well-known repertoire, their legion of fans danced and sang along to every hit.

Later, one of the more joyful surprises of the day took to the smallest Criminal Records Stage: Shannon and The Clams. Platinum blonde, Shannon Shaw – a bigger than life presence – strutted the stage, while her band of merry men played a mix of modern nostalgia that would have been as at home in the 1950’s as it was today. After the set, she and the band walked around the festival with a video crew in tow, capturing their antics, along with their amazing hair and wardrobe, putting one in mind of a John Waters film. They were an absolute joy, and the audience certainly got its money’s worth for such a big show in a more intimate venue.

Another surprise for the day was the late addition: Dropkick Murphys, who replaced last-minute dropout, Billy Idol. These “Irishmen” by way of Boston, brought a magnitude of energy, matched only by their following. The “Murphys” gave everything they had and more, as they enthusiastically regaled the audience with a joy-tinged, unparalleled showmanship to a grateful crowd who sent the energy right back to them – singing and shouting along with every song.

“We are used to seeing a few hundred people at our shows,” exclaimed lead singer, Al Barr,  “You can’t imagine how exciting it is for us to see so many people here today. This is unbelievable and we’re so very grateful.”

The Friday celebration culminated at the main Peachtree Stage with the members of Green Day: Billy Joe Armstrong, Tres Cool and Mike Dirnt bringing their set (identical to their recent Hella-Mega tour – QRO live review in Atlanta) to the adoring crowd. These seasoned entertainers were one of the major draws for many of the concert-goers, who came from as far away as Canada to see their favorites on this delightful Atlanta weekend.

Saturday was easily the most anticipated day of the festival, and drew the largest crowds. Early performances included Pretty Sick, a New York City band fronted by Sabrina Fuentes, who did not disappoint – and from the opposite coast, the L.A.-based HUNNY, with lead Jason Yarger, literally got off the red-eye and went directly to the stage, though their stand-out performance didn’t bely their exhaustion.

Julia Shapiro and Chastity Belt began with a fairly standard set, which was immediately livened up when a seven-year old neighborhood girl ran through the security barriers and made her way into the park, then onto the stage, joining the bewildered band. Originally, the crowd thought this may be part of the show, until several security guards chased the child from the stage in one of the event’s more surreal moments.

Guided by Voices was a refreshing addition to the lineup, beginning their set at 3:00 PM, and attracting the largest crowd of the day, so far. This veteran group from the ‘80s and ‘90s showed how seasoned and talented musicians can continue to entice an audience, even after 40 years. Their experience in the studio and on the road were fully on display – and greatly appreciated. “We are going to keep playing, not talking for you guys, since we only have 45 minutes,” said lead singer Robert Pollard, and play they did. This beloved and respected band knew how to put on real show and the audience responded in kind.

One of the day’s more revelatory moments was Gang of Youths’ impressive performance. While not necessarily a band with a huge following, these Australians hailing from Sydney, put on a memorable show, which the audience ate up. Frontman David Le’aupepe had an incredibly charismatic stage presence that kept festivalgoers engaged. If you were of a certain age, you couldn’t help but think of Bruce Springsteen in his “Dancing in the Dark” video, with his ebullient “white-boy” dance moves. One fully expected to see a young Courtney Cox jump on the stage and join him (a deep cut to be sure, for any who get the reference). This is meant in the most flattering way, because Le’aupepe made the moves – and the stage – his.

Another bright spot in the afternoon, was Baby Jake and his colorful backup band, who bounced all over the stage, Mixing dance music, soft rock, hip-hop, and R&B in a style he calls “urban pop.” Jake played some original songs, but also some fun covers, including two Rolling Stones hits, which excited the fans as they moved to the music.

As the evening hours kicked-off, festivalgoers were treated to two great performances, the first by the bluesy rock sounds of Reignwolf, then indie/folk artist Kurt Vile, both of whom masterfully kept the rapt attention of the crowd.

As the evening went on, fans were treated to an unusual and memorable act: Molchat Doma from Belarus, in Eastern Europe. These three, black-clad musicians, Egor Shkutko, Roman Komogortsev and Pavel Kozlov, gave a distinct “mortician” vibe as they took the stage – and while not particularly animated, they didn’t need to be. Their brand of somewhat melancholic ‘80s synth spoke for itself. Performed completely in Russian, the audience didn’t understand the group’s lyrics, but they didn’t have to – their music was the language that was shared by all. This band seems to be going places, having already sold-out their North American tour. They are an intriguing trio who added a unique quality to the lineup.

Next up were Amyl and the Sniffers, a hard-driving Aussie band. Lead singer Amy Taylor took the audience on an emotional ride as she and her musicians performed. She is anger, she is energy, she is straight up punk through and through. Her vitality is infectious and hard to contain. She feels her music and makes you feel it too. At one point she hung at the edge of the stage and decided to join her fans, jumping in with her whole body as she crowd-surfed during an entire song. She hopped back on stage, now with a bloody lip, without a care in the world. That is PUNK!

The Sniffers were followed by another Australian group with a novel name, King Gizzard & the Lizard Wizard, led by Stu Mackenzie, that can best be described as a psychedelic, acid garage band, which had a distinct and sizable following.

For a complete change of gears, there was crowd favorite, Japanese Breakfast (aka Michelle Zauner). This Korean-American artist and author (having recently released the successful book Crying in H Mart, gave a fantastic and soulful performance. She is fun, sweet, and supremely talented. She clearly loves her audience – and they love her right back. You can tell when a musician lives for their art – and she certainly does.

All of this was just a build-up, however, for the last performance of the night from a band that many had waited the entire festival for: Nine Inch Nails. NIN gave a crisp, clear and Stunning performance – possibly the best of the entire festival. At exactly 9:30, the pitch-black stage was illuminated with bright white light – pointed directly toward the audience (a bit of nightmare for band photographers). The band opened with “Mr. Self-Destruct”, setting the pace for what was to come. The entire band was wearing black, led by Trent Reznor, who, like a demon emerging from darkness, stepped through a cloud of smoke and revealed himself, subtly and elegantly to his adoring fans. Reznor maybe on the backside of 56, but he looked and sounded like he did in his 90s heyday. NIN served as a bridge to several generations of concert-goers and were, by far, the highlight of the day.

The final day of Shaky Knees was decidedly more laid back – in its musical faire and in a more subdued attitude from the crowds. Notable performances included the American indie pop/rock band COIN. These Nashville natives, led by Chase Lawrence, have been around for ten years, but are just now truly coming into their own. They performed favorites, “Run” and “Talk Too Much” with aplomb, and had the audience on their side.

Next was an Atlanta favorite Band of Horses, fronted by excellent and energetic frontman, Ben Bridwell. Although he originally hails from South Carolina, Bridwell loves Georgia – particularly, Atlanta. His parents grew up in the city and his brother still lives here. As he approached the mic, he brandished his tattooed forearms; Braves emblem on one and Georgia Bulldogs on the other as he greeted his adopted hometown. Bidwell and “Horses” were in great form, with Ben’s voice as strong as ever and their guitar-ladened sound, still on point.

Death Cab for Cutie followed Band of Horses, with their poignant, bittersweet ballads that were a good foil to what would come next. Ben Gibbard’s wonderful, faraway voice had the audience in his thrall and the 45 minute set went surprisingly quickly.

The festival closed with Louisville’s My Morning Jacket on the main stage. With their jam rock sound and catchy lyrics on songs like “Touch Me, I’m Going to Scream” and “One Big Holiday”, Jim James and company were a great way to end the weekend on a high note (literally and figuratively). This year’s Shaky Knees may have been slightly less intense than past years, but no less entertaining and enjoyable.