Sharon Jones & The Dap-Kings : I Learned The Hard Way 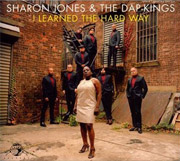 Hark!  French horns and assorted brass herald the triumphant return of Sharon Jones & The Dap Kings on the splendid opener, “The Game Gets Old”.  The sultry and soulful voiced Jones then laments, “So many times I’ve played the game of love / But it always ends in vain / I’m back in the ring with my boxing gloves / So I’m going to feel some pain.”  Luckily, Jones’ pain is the listener’s gain.

For what is a Sharon Jones’ album if not a heartfelt collection of breakup and makeup songs wrapped in sonic grits and gravy?  “The Game Gets Old” is the best of the bunch and an instant soul classic.  The cut’s harmonious horn arrangements, crisp drumming, tinkling chimes and divine backup vocals, “Yeah–ehh!  Whoo-hoo-ooh!” “Hahhh!” are alone easily worth the investment.

Click here for photos of Sharon Jones & The Dap-Kings at Prospect Park Bandshell in Brooklyn, NY on August 7th, 2010 in the QRO Concert Photo Gallery

Click here for photos of Sharon Jones & The Dap-Kings at SXSW 2010 in Austin, TX in the QRO Concert Photo Gallery

Click here for photos of Sharon Jones & The Dap-Kings at Central Park Summerstage in New York, NY on August 17th, 2008 in the QRO Photo Gallery

Click here for photos of Sharon Jones & The Dap-Kings at SXSW 2007 in Austin, TX in the QRO Concert Photo Gallery

Recorded and produced by Bosco Mann (a.k.a. Gabriel Roth, the group’s bassist) on an Ampex eight-track tape machine, the record steams with warmth.  Its sound is reminiscent of the albums created via legendary studios and labels such as Muscle Shoals, Motown and Stax.  There is a comforting tone to the record’s production and vibe that is often lacking in this digital age.

As if to highlight this sensation, studio laughter and chatter sets the laid-back tone for “Better Things”.  A funky guitar line, mixed to the right, drives the vamp.  Horn punches and handclaps contribute to a satisfying journey that leads to a hesitant defiance.  Like a mantra repeated again and again, Jones wails, “I’ve got better things to do than remember you.”  But who is she trying to convince?

“I’ll Still Be True” makes use of an odd time signature and swings like Dave Brubeck’s “Take Five”.  The aptly titled instrumental “The Reason” allows the Dap Kings to do all the talking.  The octet lay down a groovy, horn heavy, two-minute and fifteen second hotly buttered reminder that I Learned The Hard Way is a group effort.

“Mamma Don’t Like My Man” closes the dozen strong session.  It’s a bare-bones showcase for Jones’ fine pipes and her female backup singers.  Accompanied only by a single guitar, foot stomps and hand claps, Jones and company do what The Ronnettes, The Shirelles and The Supremes had done before: sing their hearts’ out.

If there is chink in the group’s armor, it’s found in their sometimes inconsistent songwriting and one-trick-pony lyrical themes.  The fun “Money” is the only track not about a man or man troubles, but it’s still about a relationship.

Trifles aside, with their fourth and mostly charmed studio release, I Learned the Hard Way, Jones and company have transcended homage, revival, parody and sub-categorization.  This is not neo-soul; this is soul, straight up.  The musicianship is spot-on; the lush production serves the songs without casting a shadow; the vibe is sublime.  Berry Gordy and Phil Spector would be proud.

MP3 Stream: “The Game Gets Old”