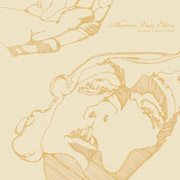 Stripped, singer/songwriter alt-folk isn’t for everyone, as the reduced instrumentation and downtrodden vocals can make all the songs sound the same, to undiscerning ears.  But for those who embrace such a sound, they should definitely check out Sharon Van Etten.  She might have been born in New Jersey, and is currently living to the other side of Manhattan in Brooklyn, but was raised in Tennessee, and her full-length debut, Because I Was In Love, hews much more to the sad strains of Appalachia.

Click here for photos of Sharon Van Etten at CMJ 2009 in New York, NY in the QRO Concert Photo Gallery

Click here for photos of Sharon Van Etten at 2009 Northside Festival in Brooklyn, NY in the QRO Concert Photo Gallery

Harmony and melody are where Van Etten makes her living, and those two hold true throughout Because.  However, sometimes she only relies on that, where at other instances she lets her guitar do a little gentle weeping too, and she’s skilled enough at that that it makes one wish she did it more.  Like the alt-country twang of “Consolation Prize”, or even some guitar fuzz on “It’s Not Like”, those sad songs exceed simple lullabies.  But she can get bogged down in her voice, even forsaking rhythm, like with “Same Dream” and closer “Holding Out”.

There are a lot of solo, stripped, singer/songwriters out there – male and female – doing something in the same vein as Sharon Van Etten, and if you’re not into any of that, she won’t make you change your mind.  But if you are, she’s got some sweet music on Because I Was In Love.