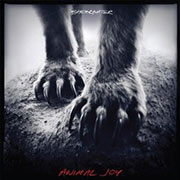 Started as a side project of Okkervil River’s (QRO live review) Jonathan Meiburg and Will Sheff (QRO photos – who is no longer with the band now), Shearwater have been making stunning music for over a decade.  None of their albums has ever disappointed but somehow Animal Joy, their eighth effort to date and first on new label Sub Pop, can be considered their masterpiece.

The album was recorded in Austin by Danny Reisch (who has previously worked with Spoon, Okkervil River and White Denim), and mixed by Peter Katis (The National, Interpol).  Andy Stack of Wye Oak (QRO live review), Scott Brackett of Murder by Death (QRO album review), and Cully Symington of Cursive (QRO live review) feature as guests.

Click here for photos of Shearwater at Scala in London, U.K. on April 3rd, 2012 in the QRO Concert Photo Gallery

Click here for photos of Shearwater at SXSW 2012 in Austin, TX in the QRO Concert Photo Gallery

A step removed from the richly decorated prog-rock of the band’s "Island Arc" trilogy (2006’s Palo Santo, 2008’s Rook (QRO review), and 2010’s The Golden Archipelago), Animal Joy is pacier, less retrospective, more dramatic.  The additional use of feedback guitars, the more prominent drumming of Thor Harris and the electric bass of Kimberly Burke (whom we were used to mainly seeing on acoustic bass and strings) all contribute to a new, rockier style.

Brainy lyrics and ambitious concepts accompany these reverb-drenched sonic visions and complex orchestration.  The beauty of Meiburg’s hyper-literate prose is that it always retains effervescence and immediacy even when heavy topics such as mortality and existential burdens are touched.  For the most part the record revolves around the relationship between man and nature (Meiburg is a biologist with a master in ornithology), immerging the listener into a journey of metaphors and symbolism.

The pulsating "You As You Were" leads with piano that progressively gathers an electronic orchestra while Meiburg sings, "You could drive the mountains down into the bay/Or go back to the east/Where it’s all so civilized," before soberly intoning, "I am leaving the life!" in a passionate crescendo, reminiscent of some of the best The National (QRO spotlight on) moments.

"Insolence" is a sublime six-minute of epic Talk Talk-esque percussion and electrics blended with soaring vocals  ("Where were you / All your life / Inside a chrysalis, writing!").  It’s followed by the garage-rocky "Immaculate", the most up-tempo track of the album but that somehow lacks the dramatic progression of other songs, the delicate "Open Your Houses (Basilisk)", which pairs a jittery drumbeat à la Spoon with tremolo-affected guitars and hypnotic piano chords, and the folk-y "Run The Banner Down".

"Pushing the River" with its seismic rhythms, droning guitars and melodic bass lines seems heavily influenced by Swans (QRO live review), who just recently hired Harris on drums.  The angelic, interstellar "Star of the Age" closes this epic album, aptly summing up the fleeting nature of our existence in just a few words, "And in the bright flash / An emptiness burns away / You trade the darkness of your mind / For the star of the age".

{audio}/mp3/files/Shearwater – You As You Were.mp3{/audio}
Tags
Album of the WeekShearwater
Categories
Album Reviews
OLDER ARTICLE

The Head and The Heart