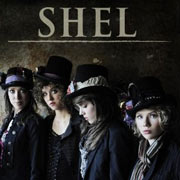 SHEL’s debut has some things going for it.  The songs deliver complex arrangements and structures.  Most of the playing – mandolin, strings, drum kit, and piano – is on point.  And the recording is sharp and polished, a good choice for chamber pop.

Unfortunately, this talent, skill, and money are wasted on some uninspired songs.  The band tries straight-ahead Celtic folk on "Lost at Sea" and unnecessarily covers "The Battle of Evermore".  Elsewhere, they tether their otherwise fluid, lyrical instrumental playing to a one-two drumbeat.  Then there’s "Tuscany", which sounds like spending three and a half minutes in the showroom at Mandolin Center.

A kitschy streak runs through the album, trivializing other songs.  "The Wise Old Owl" belongs in a Disney film, and "The Man Who Was the Circus", an overwrought melodrama, ends with applause.

Worse is "Vinyl Memories", whose dubious opening metaphor ("My mind is just a turntable / Dusty vinyl memories / The record spins and keeps repeating / All the things you said to me") is spun into even more specious ones.  The song ends with a ‘broken record’ refrain and the sound of turntable static.

The better tracks are "Freckles", "Like Minded Fool", "When the Dragon Came Down", and the novelty "The Latest and Greatest Blueberry Rubberband", which offer genuine deliveries, less kitsch, and some decent lyrics.

"Freckles" is probably the best one, but it ought to end with the smart, sudden violin glissando that nicely supports its lyrical motif.  Instead, the band decide to return for 30 seconds of reprised "du du du"s.  There is no good reason, especially since obnoxious, wordless vocal theatrics had jeopardized the song three times prior.  Besides, as on other tracks, the backing vocals intrude on some nice moments of introspection.

There are too many good sections of songs on this debut to disregard it entirely.  But if you mute all the showboating, all the tired folk clichés, and all the dull rock parts, you aren’t left with much.  The band needs a lighter hand, and songwriting that plays to their strengths.