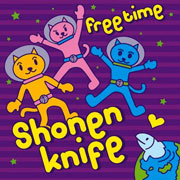 While Japan is often looked to as a glimpse of the future, with Bladerunner cities and creepily life-like, proto-Cylon robots, it’s behind the times in others, such as women’s rights, a heavy-handed justice system, only recently developing a true competitive two-party system, and rock ‘n’ roll – witness their love of Elvis (popular former Prime Minister Junichiro Koizumi put out a record of Elvis covers and shares a birthday with The King) and garage-rock.  Of course, there ain’t nothing wrong with lovin’ Elvis, and garage-rock has recently come back in a big way in the ol’ U.S. of A.  But Osaka’s Shonen Knife (QRO interview) have been doing it for round about thirty years, and keep it up with their latest, Free Time.

Click here for photos of Shonen Knife at 2010 All Tomorrow’s Parties in Minehead, U.K. in the QRO Concert Photo Gallery

Click here for QRO’s review of Shonen Knife at Doug Fir Lounge in Portland, OR on October 23rd, 2009

Now, Free Time isn’t that different in sound from the band’s last, 2008’s Super Group (QRO review), or the records before that, save for Super‘s shift from Japanese/English mix to all-English; Free Time actually has two versions, a Japanese one out this summer, and an English one out this fall.  It’s still the bright, cheery garage-rock that the ladies of Shonen Knife specialize in, and they can still do it well.  Free Time can get one note and forgettable, but there are some pieces that differ, such as the speedier "Economic Crisis" (something else Japan was experiencing long before America & the rest of the world), a swishing beat & early-nineties pop/punk bass line to the following "Do You Happen To Know", and a garage-twang to the (literal) "Love Song".  Mostly these work, though the sadder "An Old Stationary Shop" and ditties like the prior "Capybara" aren’t special enough, and the mix of ditty, garage, and near-psych-rock guitars to closer "Star" is outside of Shonen Knife’s wheelhouse.

Back in the Land of the Rising Sun, local music fans might be sick of the ample amounts of garage-rock (like many are in Brooklyn, ground zero for America’s current garage-wave), and think that Shonen Knife haven’t evolved.  But here in the States, whenever they pass through it’s a refreshing breeze of consistent enjoyment.

MP3 Stream: "Do You Happen To Know"