Somehow, Shonen Knife has outlasted them all. ... 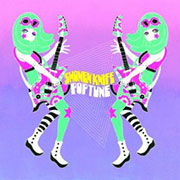 Somehow, Shonen Knife has outlasted them all.  The Japanese garage-rock outfit has been making music since the early eighties, yet now has seemingly outlasted even Sonic Youth (QRO live review) – albeit with singer/guitarist Naoko Yamano the only still-charter member.  They’ve been doing garage-rock long, long since before it was fashionable in Brooklyn (hell, long, long before Brooklyn was fashionable…), without ever changing their style that much.  Latest Pop Tune unsurprisingly goes more poppy, for a simple record even for Shonen Knife.

Garage-rock has always appealed thanks to its simplicity (not to mention low financial cost), but even for that, Shonen Knife get pretty damn simple on Pop Tune, with many songs essentially being J-pop garage, such as the title track.  It’s never done poorly, but can grate over time, such as with the at-first-enjoyable, then-not-so-much “All You Can Eat”.  Maybe the most interesting thing on the record is that the band occasionally throws in odd instruments like kazoo (“All You Can Eat”) or even flute (“Psychedelic Life”).

It’s long since past the point where Shonen Knife would radically change their sound, and Pop Tune is another enjoyable, simple garage-rock record from the über-vets – if not one of their most memorable.