<img src="http://www.qromag.com/wp-content/uploads/2009/09/shonenknifesupergroupus.jpg" alt=" " />If you're going to listen to girl-group garage-rock, might as well listen to Shonen Knife. ... 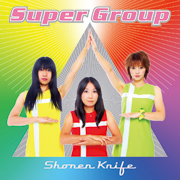 There’s so much garage-rock floating around the indie world these days, you could be forgiven for thinking that the sound has only just reappeared, after not being heard since the fifties.  But, in fact, lots of bands have been doing it for years & years, and one who has been doing it especially long is Japan’s Shonen Knife.  The three-person girl group started all the way back in 1981, but got their ‘big break’ in the early nineties when they found a fan in Kurt Cobain, who invited them on tour with Nirvana.  Major label status started with 1992’s Let’s Knife, but this decade/century/millennium has seen the outfit moving American labels with each record.  What’s more, the trio had remained the same for almost twenty years before bassist Michie Nakatani left & drummer Atsuko Yamano switched to bass, but Yamano left in 2005, leaving singer/guitarist Naoko Yamano the sole original Knife.  However, their girl-group garage-pop/rock hasn’t changed that much, even with their latest, Super Group.

Well, there is one change: all the songs are written & sung in English, whereas before the group had switched between English & Japanese.  That obviously makes Super Group more accessible to Anglophone ears, but the catchy, fun garage-pop/rock of the title & leadoff track would really work on anybody.  While the rest of the record never quite matches "Super Group", Shonen Knife do garage-pop as well as anyone (you can decide for yourself if that’s faint praise…), and singing in English helps to eschew any overkill in the ‘cute little Japanese girls playing rock ‘n’ roll’ department.

Unfortunately, Shonen Knife’s sound isn’t that complicated, and doesn’t vary that much either, making Super Group less interesting, the farther in one gets.  While the up-down of "Slug", country-pop rhythm of "Deer Biscuits", and relaxed fun of "BBQ Party" all make the first half of the record quite enjoyable, the back side really suffers.  Overly uncomplicated numbers like "Your Guitar" and "Na Na Na" are utterly forgettable, and after "Jet" tries to bring it back up with a bigger sound, Super Group closes on its weakest note with the boring bonus track "Evil Birds" (there’s a reason it wasn’t on the original Japanese version, which has a better finisher in "Jet").

Despite its explosion these days, alt-garage is still a fairly basic sound, albeit an enjoyable one (in fact, one of the reasons that it’s growing in popularity is the ease – both skill-wise and financial – with which one can make it).  But back before lo-fi & shitgaze, before hipster Williamsburg and the rest, three girls from Japan were pulling it off.  And if you’re gonna listen to some garage-pop/rock, might as well be Shonen Knife – accept no substitutes.