If a foreign favorite – or favourite – of yours comes to your shores, you better jump on seeing them, like when Sweden’s Shout Out Louds came to Brooklyn’s... 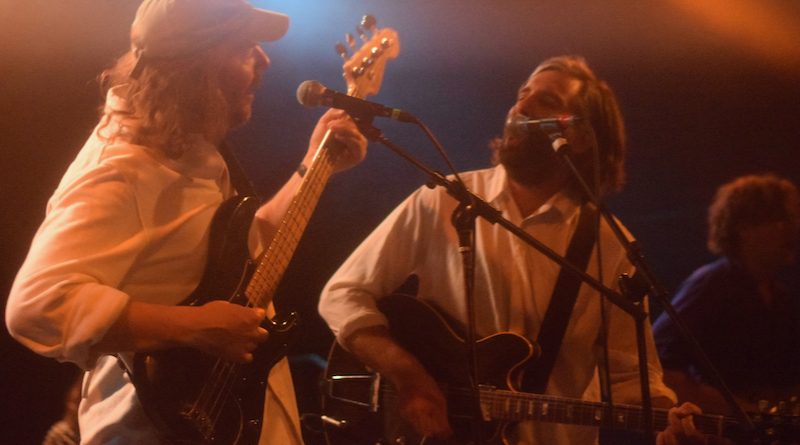 Even as America has reopened (whether we should or not), even as tours have begun again, one had to wonder whether we’d get to see our favorite foreign bands. It’s not just that America has long been First in making international touring difficult, from bureaucratic hoops to high visa charges (even Canadian acts get hit with it, while even today’s Brexit Britain is more hospitable). It’s that traveling is still so hard, still so expensive, still such a gamble. People are still worried about going out, venues (that survived COVID) are in precarious final straights (answer seems to be to raise drink prices…), and it’s not like the music industry was doing that hot in the before-time. So, if a foreign favorite – or favourite – of yours comes to your shores, you better jump on seeing them, like when Sweden’s Shout Out Louds came to Brooklyn’s Music Hall of Williamsburg on Tuesday, May 17th near the end of their first U.S. tour in five years.

It wasn’t an easy corona crisis for our friends from Stockholm – okay, no one died or the like, but the lockdown hit right when they were finishing their record, stopping that and any touring they were gonna do afterwards. Meanwhile, life went on, members having kids and their day jobs. Thankfully, they were able to put together new album House (QRO review), but had to delay releasing it until they could tour, so just came out earlier this year, and even then Omicron pushed their European tour back – but not America, because that couldn’t be rescheduled. That meant that, other than a handful of Swedish shows and the odd Italian festival, this was the first time House had been taken on the road.

Admittedly, House is a sadder record from the indie-pop act, and we need reasons to be upbeat – but also to acknowledge, to feel, how sad things have been. That made specials songs from it like “As Far Away As Possible”, even as the band was “As far away from Stockholm / As far away as possible.” And certainly special was “Sky and I (Himlen)” – on record, singer/guitarist Adam Olenius (QRO interview) gives the mike to singer/keyboardist Bebban Stenborg for the sweet, soft song. But Stenborg is currently raising two very small children, and thus couldn’t make the trip across the Atlantic, so in her place for this was young Stockholm musician Esther Lennstrand, who took up the vocals for “Sky” and others lovely.

Indeed, it was particularly lovely watching Ester dance in the back (unfortunately, didn’t come to the front for “Sky”) during moments when she wasn’t playing (or even was just one-handing her keys) for songs like “Possible” or classic “Impossible”. They were total ‘dance like no one’s watching’ moments – she was in the back, and not a lot of light, but perhaps that let her not be as shy as you or I would be on our first American tour.

Olenius was in high spirits, from telling bassist Ted Malmros that he “missed him,” even though they’d been in a van together for two weeks, because this was the rare night they hadn’t had dinner together. Malmros replied back to Olenius, who was telling the crowd he was switching to an acoustic guitar, that Olenius was explaining everything he was doing, “Like a waiter at Olive Garden.” They joked about running low on merch to sell after the show (a good thing, so as not to have to take it back to Sweden), and Olenius even just guessed it was one up-front fan’s birthday, confirming it charmingly.

And Olenius only upped it later on in the night. Yes, there had been their indie-pop hits that made you fall in love with them a decade-plus ago, from “Very Loud” and “Please Please Please” of 2003 debut Howl Howl Gaff Gaff to “Impossible” & “Normandie” from 2007’s Our Ill Wills (QRO review), “Fall Hard” off of 2010’s Work (QRO review), “14th of July” from 2014’s Optica (QRO review), and “Jumbo Jet” off of 2017’s Ease My Mind (QRO review). But to go into the encore break was perhaps their biggest song, that which made them a ‘Swedish Sensation’ a decade-and-a-half ago, “Tonight I Have To Leave It”. Coming off the crowd sing-along for “Please”. As the song was about to go into its big crescendo chorus of, “Why won’t you give love?”, Olenius had the lights turned down, put up his own flashlight on the disco ball above, and jumped into the crowd with his mike to join them all declaring, “Tonight I have to leave it!”

And there was still an encore return. Work’s “Walls” brought another cathartic indie-rock sing-along, along with Wills’ “You Are Dreaming”. For the final song of the night, not only did Olenius go into the crowd with his mike, he did it with his mikestand & guitar, as we all Howled along to “The Comeback”. It was the kind of moment that we’ve so, so missed these last few years. A sweaty group celebration with friends you haven’t met yet, singing along to a personal favorite by a personal favorite. We called it the comeback…

While hardly a sold-out show, that meant there was room for such a move, and seemingly most of the crowd stayed after the show to buy some of the rapidly-diminishing merch (Olenius remarked to your correspondent that even he couldn’t get one of the long-sleeve shirts that had already sold out) and take photos with the band. This was why we go out, why they tour, what we all shout out loud for.