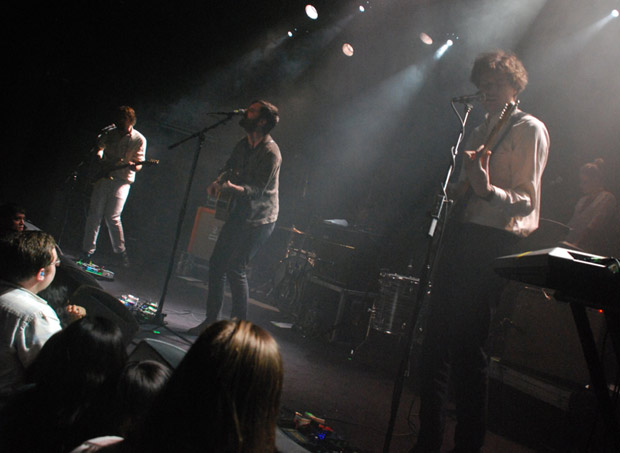 Click here for QRO’s interview with Adam Olenius in 2010

Click here for QRO’s review of Shout Out Louds at Webster Hall in New York, NY on May 5th, 2010

Click here for photos of Shout Out Louds at Pianos in New York, NY on March 2nd, 2010 in the QRO Concert Photo Gallery

Click here for QRO’s review of Shout Out Louds at Music Hall of Williamsburg on March 1st, 2010

Click here for photos of Shout Out Louds at Music Hall of Williamsburg on October 26th, 2007 in the QRO Concert Photo Gallery

Stockholm’s Shout Out Louds have the frustrating habit of disappearing for a long while, at least to Americans.  They’ll tour the States behind a new album, and then not return until the next new one, two or three years later.  Their most recent disappearance was extended by singer Adam Olenius (QRO interview) delving into his side-project, last year’s We Are Serenades (QRO spotlight on).  But the Swedish favorites have finally returned with the new Optica (QRO review) – and to the States, playing a special one-off at Brooklyn’s Music Hall of Williamsburg (QRO venue review) on Monday, March 11th.

The show was a one-off as the band was stopping off in the Big Apple before going southwest to South-by-Southwest (QRO preview) the following day.  This was one of the first times they’d played Optica live, and the first time in America – there’s a full tour coming in May (including a return to NYC, this time at Webster Hall – QRO venue review – on the 10th).  The band was understandably excited about playing their new songs live, but like good, humble Scandinavians, bassist Ted Malmros apologized to the crowd for playing so many (at least the record had come out, albeit only a couple of weeks ago).  They opened with Optica opener “Sugar”, and almost never played older songs back-to-back (the one exception was on either side of the encore break).

The more energetic Optica songs like “Sugar”, “Glasgow”, and “14th of July” naturally were the best received by the crowd – other tracks such as “Blue Ice” have a great nighttime smooth dance on record, but haven’t made the complete transition live.  Shout Out Louds also nighttimed-up some of their

older songs, such as “Hard Rain” and “Impossible” from 2007’s Our Ill Wills (QRO review) – the change was interesting, but on top of all the new songs (and not so many old ones), it loaded up on an already heavy side.  Still, there were classic live performances of numbers like “Fall Hard” (from 2010’s Work – QRO review) and “Very Loud” (from 2005 debut Howl Howl Gaff Gaff), which went into the encore break.  The five-piece (who were playing with Lars Skoglund, a tour replacement for drummer Eric Edman, who was back in Sweden “busy with work and having a baby…”) returned with an amazing rendition of Work’s “Walls” – a closer to the night on their prior Work tours, it was almost too powerful; they could have very easily ended the night with just it as a one-song encore, but instead it somewhat overshadowed the following new “Destroy”.  Still, the evening was more than well served in its finish with Wills single “Tonight I Have To Leave It”, with Olenius bringing out his trust gogo. 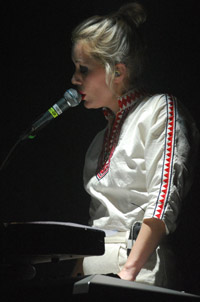 Many European acts play New York the weekend before South-by-Southwest, usually little more than a warm-up before the festival (the New York-to-Austin flights right after are chock full of English hipsters in skinny black jeans…), but this was a full-fledged return for the Shout Out Louds.  Their May date at Webster Hall can’t come fast enough – and the larger venue will better fit their crowd, as Music Hall was sold-out, thick with fans, more female ones than you usually get at an indie show (pretty much a perfect date choice, and Louds’ beautiful Bebban Stenborg is hidden in the back behind keyboards and so won’t make your girlfriend jealous…). .  And hopefully it won’t take years & another new album for them to return again.