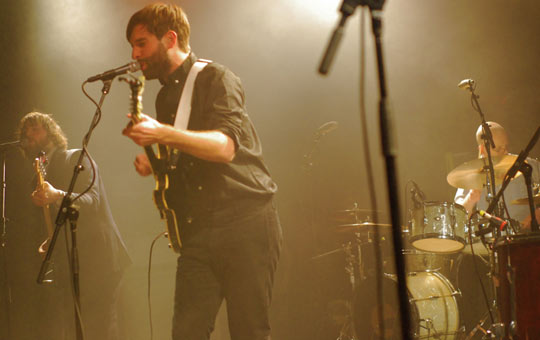 It’s been a long time since the Shout Out Louds came to the States.  Even for a band from all the way over there in Sweden, it seems like it’s been forever.  The band did indeed take a break after their worldwide tour for 2007’s Our Ill Wills (QRO review), not just from touring, but from music altogether.  That could help explain the excellence and joy of their March 1st performance at Brooklyn’s Music Hall in Williamsburg (QRO venue review) – or it could have just been the great music. 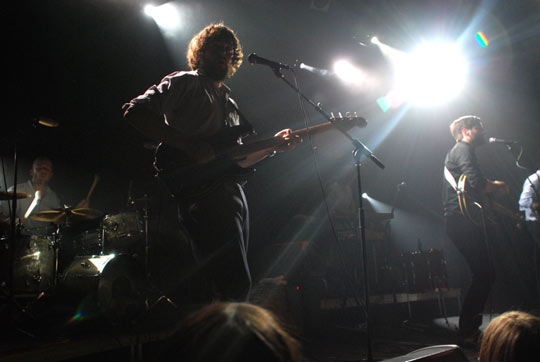 Click here for photos of Shout Out Louds the following night at Pianos in New York, NY in the QRO Concert Photo Gallery

The Monday night show was a bit of an odd one going in, and not just because it was the band’s return to Music Hall (QRO photos from last time, in 2007).  The appearance was not part of a tour, but rather of a press junket for their new record, Work (QRO review), out the week before.  Indeed, it was the only ‘official’ show they had scheduled in America then (two more free, secret shows were added afterwards, on the next two days – QRO photos); instead, the band will be returning to America in May for a full tour.  But being a press junket, it was planned well in advance – and went on sale well in advance, leading to it selling out well in advance.  As singer/guitarist Adam Olenius (QRO interview) said, "This is the first time we’ve sold out a show a couple of months in advance…" 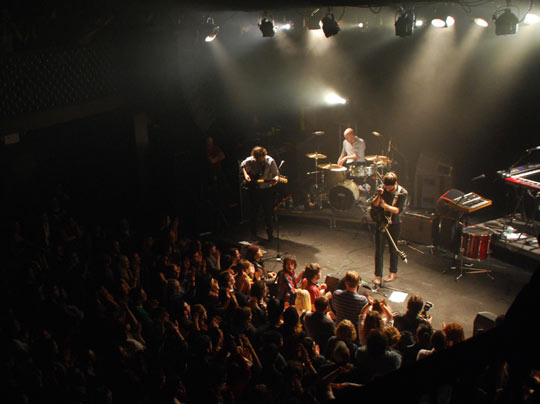 Click here for photos of Shout Out Louds the last time they were at Music Hall in Williamsburg, on October 26th, 2007 in the QRO Concert Photo Gallery

Maybe the long time away gave extra fervor to the crowd – or maybe it was Work.  The new record manages to keep everything you loved about their previous two, Our Ill Wills and debut Howl Howl Gaff Gaff (minus a go-go or two…), while also shifting just 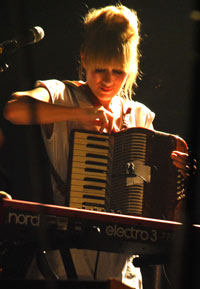 enough to make it fresh, going a bit away from the more elaborate moments of prior work, presenting the band more honestly.  Work naturally dominated the set list (something the band admitted from the get-go, but anyone who’d bought a ticket months in advance knew it would be), with every song from it on the set list (QRO photo) but "Four by Four" (not it’s best), starting the night with Work opener "1999".  But what was especially impressive was that it wasn’t just the record’s out-and-out great songs, such as "1999", single "Fall Hard" or "Show Me Something New" that were excellent, but every song, from the sad restraint of "Candle Burned Out" to the into-an-anthems "Throwing Stones" and the night’s closer, "Walls". 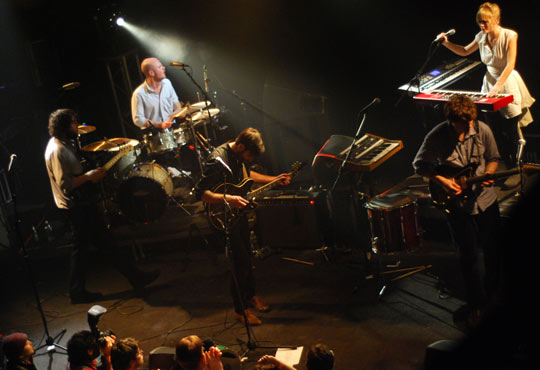 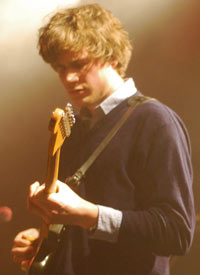 Indeed, it pretty much seemed like the band couldn’t 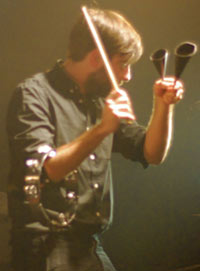 make a wrong choice, on the set list or in a song.  Yes, top Our Ill Wills tracks such as single "Tonight I Have To Leave It" (which Olenius still had his go-go for), "Parents Livingroom" and "Hard Rain" were great, or Howl‘s "The Comeback" and "Very Loud", but also "South America" and "Please Please Please" (from respective records).  The crowd did get particularly excited when Olenius said, "Let’s go old school" before "Please", but a fan also remarked "So sweet!" after "Candle". 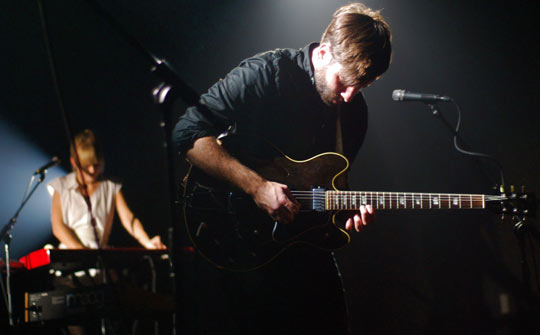 Shout Out Louds playing "Tonight I Have To Leave It" live the last time they were at Music Hall in Williamsburg, on October 26th, 2007: 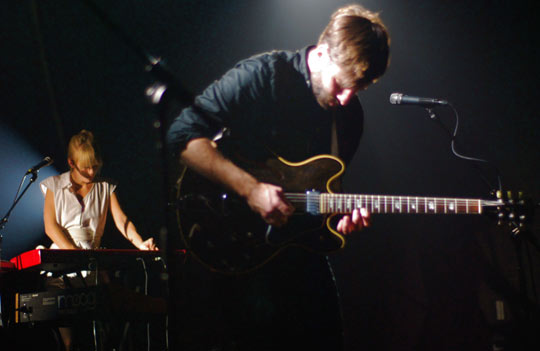 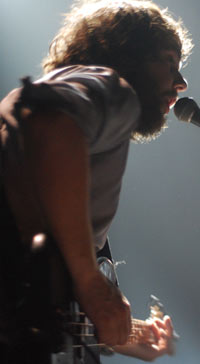 If anything, the Shout Out Louds were blown away by the love from the crowd.  While Olenius is relatively soft-spoken in person normally, he seemed even more so at Music Hall, while guitarist Carl Von Arbin and singer/keyboardist Bebban Stenborg were relatively reticent (Stenborg in particular, stuck there in the back – at least there was some great lighting on her, enhanced by her white 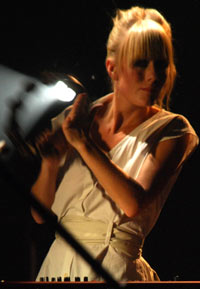 dress and pale Nordic features).  Drummer Eric Edman was focused like most drummers are, leaving it to bassist Ted Malmros to be the one really into everything (like most bassists are…).  For their U.S. tour in May, Malmros will be absent, awaiting the birth of his child – while that’s pretty much the best reason ever to miss a tour (okay, if you were the woman having the child, that would be the best reason…), the fill-in bassist will have big shoes to fill (or, as Olenius once renamed the band’s song "I Wish I Were Dead" – "I Wish I Were Ted"). 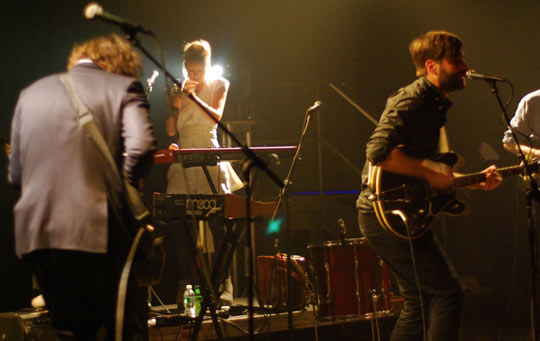 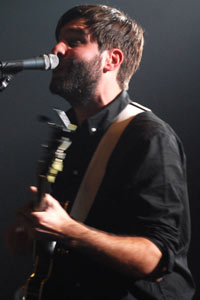 Shout Out Louds have always stood a bit in others’ shadows, whether countrymen like Peter Bjorn and John (QRO spotlight on – Björn Yttling produced Our Ill Wills, and Malmros directed PB&J’s "Young Folks" video), or Merge labelmates like 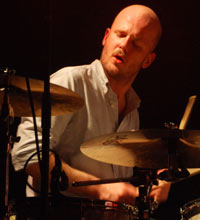 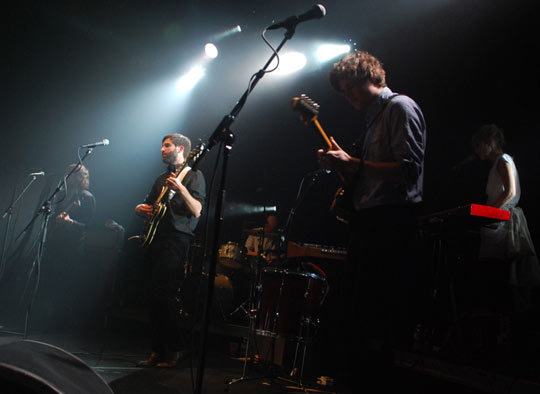 Seabear : We Built A Fire

Pavement : Quarantine the Past (The Best of Pavement)