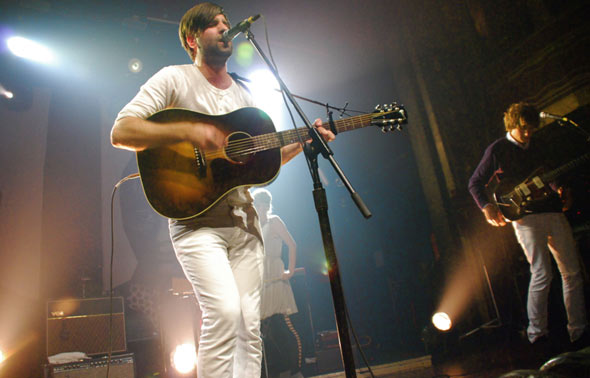 Click here for QRO’s interview with Adam Olenius in March

Click here for photos of Shout Out Louds at Pianos in New York, NY on March 2nd, 2010 in the QRO Concert Photo Gallery

Click here for QRO’s review of Shout Out Louds at Music Hall in Williamsburg on March 1st, 2010

Click here for photos of Shout Out Louds at Music Hall in Williamsburg on October 26th, 2007 in the QRO Concert Photo Gallery

Sweden may be the land of Ingmar Bergman, but it’s also the land of ABBA, yet it’s less known for the times when the high-minded and the irresistibly catchy meet, like in native sons (and daughter), Shout Out Louds (QRO spotlight on).  But even then, the indie-pop outfit has gotten overshadowed, whether from fellow countrymen like Peter Bjorn and John (QRO spotlight on), or from the burgeoning indie-pop movements all over the world.  These days, if you aren’t doing something either complex to the point of experimental obtuseness, or something fun to the point of out-of-control wildness, nobody notices; Radiohead (QRO album review) and the Flaming Lips (QRO live review) are too ‘mainstream’.  Which is why it’s extra-great that the Shout Out Louds are finally getting some of the popularity that they’re oh-so due, having played their biggest New York date so far at Webster Hall on Wednesday, May 5th.

Some bands are ‘cult’ bands – loved by a devoted minority, ignored by the rest; an ignorance sometimes bemoaned by the minority, but usually just accepted.  Some other acts are ‘divisive’ – loved by a devoted minority, hated by anyone else who hears them, and bitterly fought for & against [note: while the former type of artists aren’t always deserving of the love or ignorance, the latter are usually deserving of the hate].  Some bands are one-hit-wonders, with one great song that you will eventually get sick of and doesn’t lead you to want to listen to anything else by them.  Some other bands are background, likable by almost everyone, but devotedly loved by almost no one.  Some bands are ‘influential’ – the kinds of bands who don’t get a large following, but those who do follow them go on to start their own bands (leading to a financially successful reunion ten-to-twenty years later).  And there are, of course, the few top-shelf icons that everyone at least likes, more often than not loves, and the only debates are about which parts/member are the best, or where the iconic acts stack up relative to each other (i.e., on that list of ‘greatest bands of all time’ – after The Beatles…). 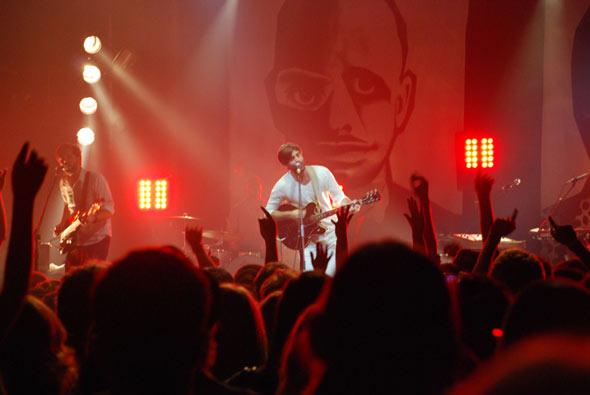 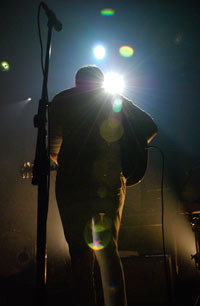 And then there are the bands that virtually anyone who hears them loves, yet somehow aren’t widely loved big hits, and their fans can’t figure out why.  The classic example is Big Star and the just-passed Alex Chilton, whose power-pop could have, should have been “bigger than Jesus.”  A more recent, more hopeful example is France’s Phoenix (QRO live review) – the band that you love, where you can’t understand why anyone you know wouldn’t love them; the recent, massive success of last year’s Wolfgang Amadeus Phoenix (QRO review), Grammy winner for ‘Best Alternative Album’ and the runaway pick for album of the year by numerous indie publications (including this one – QRO Top Albums of 2009), points to success finally matching the love.

The Shout Out Louds are this kind of band, with three great indie-pop albums, which are neither repetitive nor unrelated. 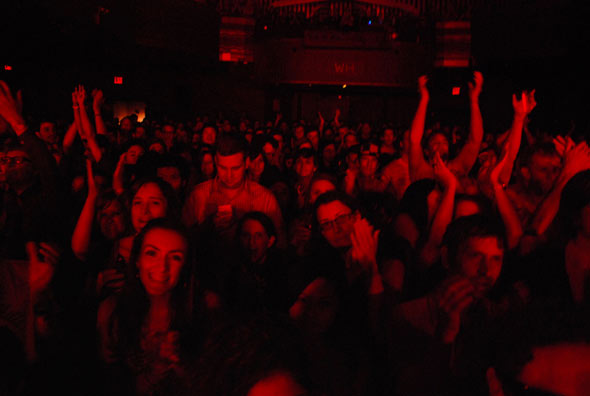 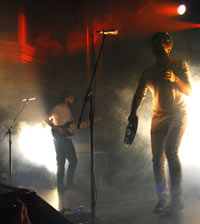 Touring America on the back of the new Work (QRO review), the Shout Out Louds were actually returning to New York just over two months after playing a special Work release show on March 1st at Music Hall in Williamsburg (QRO live review).  That was a special one-off, as the band came to the city to do American press & interviews (QRO interview) to coincide with the release (actually did a couple of other free, unannounced gigs – QRO photos).  In the two months in between, they at least moved up in venue size (after having also played Music Hall in their visit before the last, two-and-a-half years prior – QRO photos), from Music Hall (QRO venue review) to Webster (QRO venue review) – but had sold-out Music Hall months in advance, whereas were playing Webster on a Wednesday that was also Cinco de Mayo (not exactly ideal for a Swedish band…).  Still, Webster had a strong crowd, albeit one divided between the younger, eager fans up front, and the older, less energetic ones farther back.  And Webster’s usual overuse of the smoke machine was in full effect; the band tried to fight that with bright lights and white outfits, but the smoke was white, too, making the members something of large blobs among the blobs of smoke at times. 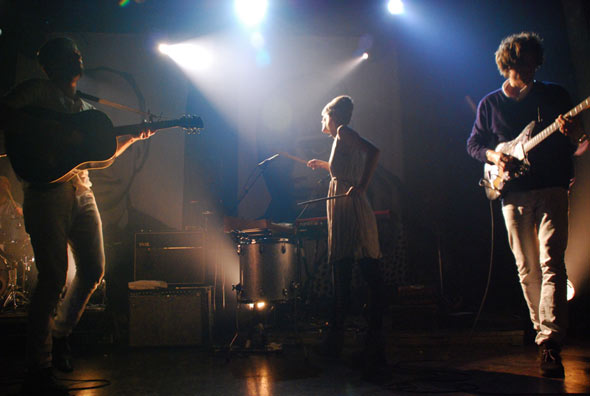 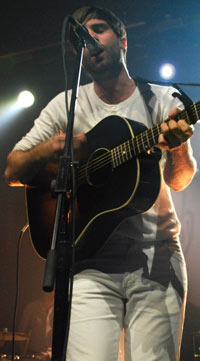 The set list (QRO photo) was divided roughly half Work, quarter 2007’s Our Ill Wills (QRO review), quarter debut Howl Howl Gaff Gaff, opening with Work opener “1999”.  Work especially dominated the first two-thirds of the set, but the back third had only one Work piece, the night’s final closer, “Walls”.  The only track off Work not played was “Four by Four”, not its strongest, but weighting towards the new did leave out some choice earlier numbers, such as Wills‘s “Parents Livingroom”, “Time Left For Love”, or “Hard Rain”, or Gaff‘s “100°”, “Hurry Up, Let’s Go”, or “Shut Your Eyes”.  Though with so many choice numbers, old & new, this was bound to happen.

One older track they did play was Wills‘s “Normandie” – though don’t expect them to ever do it again.  One of, if not the best song from Wills, “Normandie” is an admitted ‘studio creation’ that the band has had difficulty translating into a live setting, but at their date two nights earlier in Philadelphia, someone in the crowd had “shouted for it between every song”, so the Shout Out Louds endeavored to play it, late in the set.  Unfortunately, singer/guitarist Adam Olenius (QRO interview) broke a guitar string mid-song, and had to switch it with another, making the exchange with their roadie as he ultra-extended the quiet, restrained go of the chorus, “Go… back to… sleep / And… let’s… sail… a…way… to… the… beaches… of… … Normandie!”  The rest of the band went along with it, as did the crowd, which did make the up-explosion after the finally finished quiet go much bigger (including a big crowd cheer) – but the bandmates were too discombobulated to finish the song in time with each other, ending in a jumble of individual finishes.  Still, it was a hilarious, enjoyable moment, maybe made only sweeter by the fact that it’s likely no one will ever see it again. 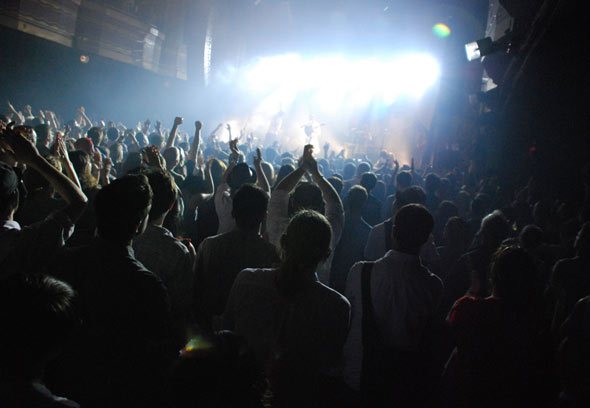 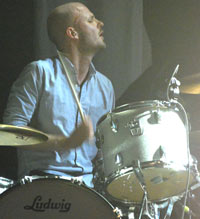 While Work definitely stayed within the indie-pop frame of the prior two records, it was a more downbeat, certainly slower record, thanks to a number of tracks in that vein.  The live show reflected that, but pieces like the somber “Play the Game” & “Moon”, or even brighter “Candle Burned Out”, while undeniably good, messed with the flow, especially coming right after killer upbeat tracks “The Comeback”, “Tonight I Have To Leave It”, and “Show Me Something New”.  And after Work‘s great single “Fall Hard” had the whole crowd invigorated, the sweet, restrained wa-wa of “Too Late, Too Slow” was, in comparison, exactly that. 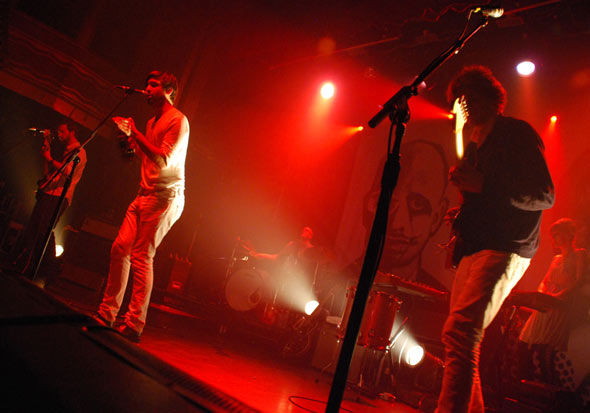 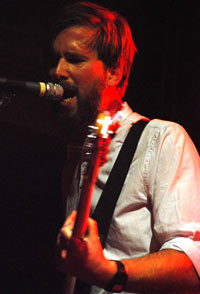 Olenius was very much the frontman at Webster, touching the hands of the crowd during Wills single “Tonight I Have To Leave It” (when he wasn’t putting his go-go – a Brazilian instrument that’s like a Lusophone cowbell – on his drum stick and swirling it around).  He had to pick up some of the slack left by the absence of bassist Ted Malmros, previously the only other member of the band who had been at every single show, as Malmros was back in Sweden awaiting the birth of his child.  Henrik Jonzon (QRO interview), of Nervous Nellie, their opener on the German tour in April (QRO live review), filled in admirably, including sporting a beard like Malmros (though Malmros’ shaggy hair makes him look more like Jimmy Fallon playing Barry Gibb, while Jonzon’s shorter hair was more reminiscent of Mac from It’s Always Sunny In Philadelphia…), but no one can really ‘replace’ Ted [note: yes, your writer is biased…].

Couldn’t they have brought singer/keyboardist Bebban Stenborg closer to the front?  Okay, 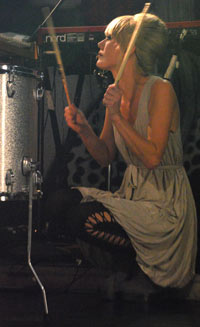 drummer Eric Edman was going to be back aways – that’s the lot of drummers everywhere – but did Stenborg have to be the same distance back as Edman, lost behind Olenius, guitarist Carl von Arbin, and Webster Hall’s smoke machine?  Maybe in Sweden, beautiful blondes in bands are a dime-a-dozen, but here in The States, we cherish them.  It might be that Stenborg is rather shy: after bringing her own-led song to the table on Wills (“Blue Headlights”), nonesuch was on Work (and “Blue” wasn’t on the set list); also, her keyboard’s mic seemed positioned so that, when she sang, her back would be at least halfway towards the audience.  And even when she had to take a step forward to play her standing drum on “Throwing Stones”, she did the ‘click-clacking the side of the drum’ from a crouched position, really only visible to photographers.  Only late in the set, when wearing her accordion, did the finally mobile Stenborg finally come to the front row. 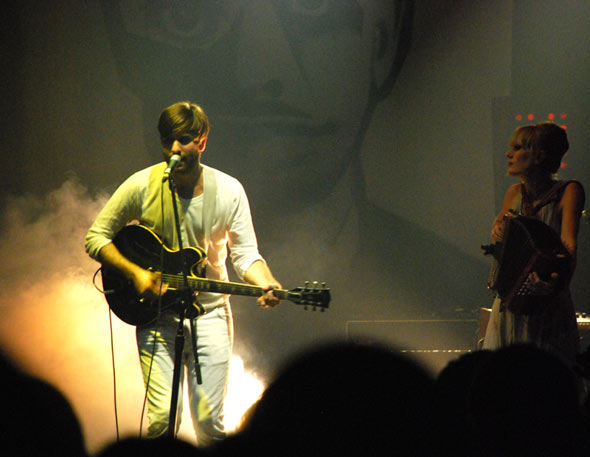 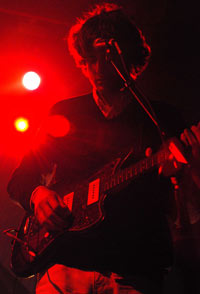 But quibbling about missing your expectant namesake or not getting enough of the blonde bombshell is minor, rather pet peeve-like complaining.  The Shout Out Louds are almost like The Cure, but minus the things you don’t like about The Cure (and not just Robert Smith’s weight…): their bright side is indie-pop without being cheesy, and their sad side is touching without being maudlin (though the divide in fans between the ‘young & in love & easy to impress’ and ‘older, work for a living, don’t like to be impressed’ is present for both bands).  How could someone not love the Shout Out Louds’ set, from “1999” to encore breaker “Very Loud” (which included the band medleying into & out of a cover of Kiss’ “Back In the New York Groove”) to the impossibly good encore return of “Impossible” (which really could have ended the night right there & then, and still would have been great) to the final, anthemistic “Walls”?  How could someone not love the Shout Out Louds? 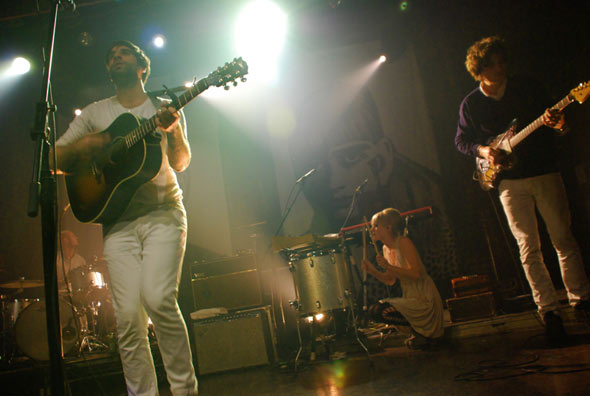