The quirky, Australian singer sold out the House of Blues in San Diego on Monday, April 19th. ... 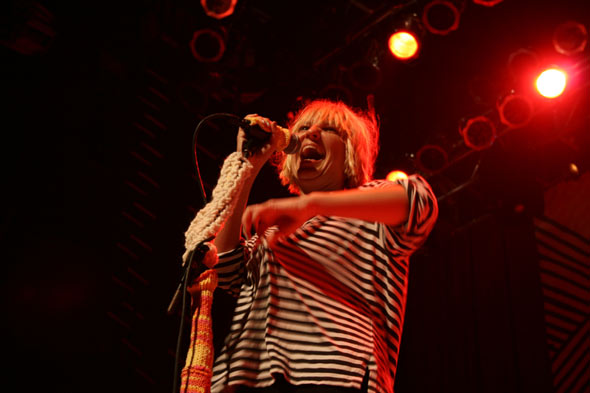 Click here for photos of Sia at 2008 All Points West in Liberty State Park, NJ on August 9th, 2008 in the QRO Concert Photo Gallery

The quirky, Australian singer sold out the House of Blues in San Diego on Monday, April 19th.  “We love you, Sia!” they shouted, pressing forward to offer her presents: an inflatable heart (later volleyed around the room), flowers, a purse and a crown of money (the denominations unclear).  Sia accepted the gifts with her unique wide and maniacal smile.  “I love presents!” she squealed like a teenager, proceeding to don the crown and the purse.

“Big Girl, Little Girl” from her forthcoming album We Are Born was an indication that the ‘80s have penetrated her songwriting.  The perky dance inducing “You’ve Changed” followed and will also be on We Are Born.  Oddly, with the new material, the band threatened to overtake Sia in volume. 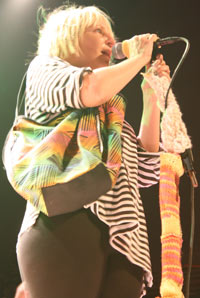 The concert really kicked in with “Little Black Sandals”.  Sia’s soulful, jazzy voice, paired with her often dark pop music, is compelling – as is her alien-like persona.  She certainly is unique, which is perfect since the décor of knitted blankets and the band (wearing god-awful ‘80s stripes, and probably still tired from their late night gig at Coachella the previous Saturday – QRO Festival Guide) weren’t much to look at.

Sia continued the successful variation of tempos and emotions with the slower Pretender’s cover, “I Go to Sleep” and the bouncy “Buttons”.  The enthusiastic response from the crowd compelled the singer to engage in strobe light mannerisms, where her arms move jerkily and she appeared as if she has a touch of the palsy.  “I’m doing the wiggle dance for San Diego!” Sia said.  She then brought three young boys from the wings to sit up on the front of the stage.  “I used to nanny two of these guys… we’ve got three more songs for you.  Then we’re going to do a fake encore and come back.”  The group performed the new “Clap Your Hands”, the awesome “You Have Been Loved” and the classic “Breathe Me”.  True to her word, the band split momentarily as the crowd called for more.  They returned, but the climax had been reached. 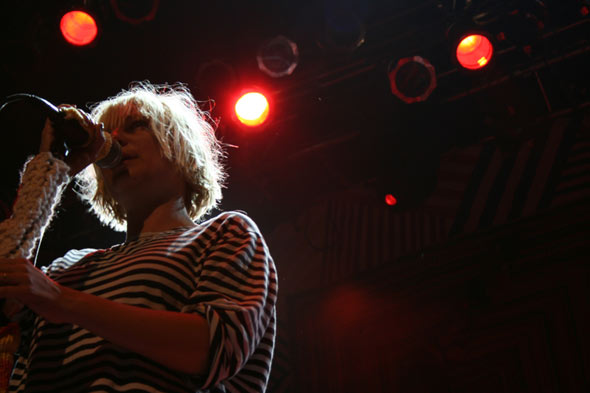