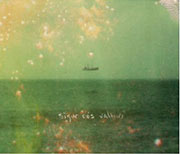 Hands down, Sigur Rós is one of the best bands to come out of the ‘90s.  Few acts have emerged from that decade and been able to maintain even a career, let alone the longevity with grace and style that has been demonstrated by these boys from Iceland.  Maybe that’s the big secret: they aren’t from America.

Their music is the definition of beauty and their latest album Valtari is absolutely no exception.  It’s their first in four years, and given that they scrapped previous recordings for a new album and went on a short hiatus in 2009, there was a little while there when the general listening public wondered if they would ever hear from them again.  Thankfully, we have.

It’s difficult to classify Sigur Rós’ music, because in many ways they have formed their own genre.  Their post-rock ambient sound has proven extremely successful for them but has also birthed and given inspiration to more recent acts such as Explosions In the Sky, This Will Destroy You, or Mogwai – the list goes on.

Valtari is a bit of a slower, more melodic body of work than previous albums by Sigur Rós.  There aren’t any moments like that of the climax on “Glósóli” from 2005’s Takk…,  or songs like “Hoppípolla” from the same album, or “Inní mér syngur vitleysingur” from their most recent studio album, 2008’s Með suð í eyrum við spilum endalaust (QRO review – good luck pronouncing all of that, by the way).

In fact, drums don’t even make an appearance on Valtari until the 3:46 mark of the album’s third track, “Varúð”.  From that point on they are anything but prominent, which might disappoint some listeners, but as usual everything with this album is done very tastefully and fits the overall picture/feel the band was going for.

Another unique thing with Valtari (as with the band’s previous works) is that, yes, there are vocals on a lot of the songs but in this context they really aren’t anything more than another instrument, still giving the music a purely instrumental feel.

One particularly enjoyable moment is how the two songs “Dauðalogn” and “Varðeldur” flow into one another.  This is one of those small details that leave listeners wondering why the band didn’t choose to just make them one ten-plus minute-long track like they have so regularly done in the past.  Perhaps it could be that they wanted this album to appear more accessible? Once again, almost everything this band does is open to interpretation.

It’s quite difficult to qualify the albums of Sigur Rós because their music is so completely emotive.  They have this quality to them that suggests they aren’t meant to be listened to, but felt.  That being said, Valtari when compared with Sigur Rós’ body of work as a whole seems particularly emotional, and the great thing about this band’s music is that listeners can decide for themselves more so than with other bands just which emotions it evokes and what the meaning behind them might be.  It’s a safe bet to look for this album on many ‘Best of 2012’ lists.

The high point of the album is its last song, “Fjögur piano”.  It is translated as “four pianos” and features just that.  The simplicity of it couldn’t have been more beautiful and impactful.  Not to mention there is an amazing companion music video starring Shia LaBeouf.  Of the video, the band’s bassist Georg Holm had this to say, “It seems to have no beginning and no end, and just makes you think about what might and might not be going on.  It’s a puzzle…” It’s funny, because that quote perfectly embodies the music of Sigur Rós.