Just before escaping waterlogged England for much sunnier Spain, Simon Balthazar of Fanfarlo talked to QRO.... 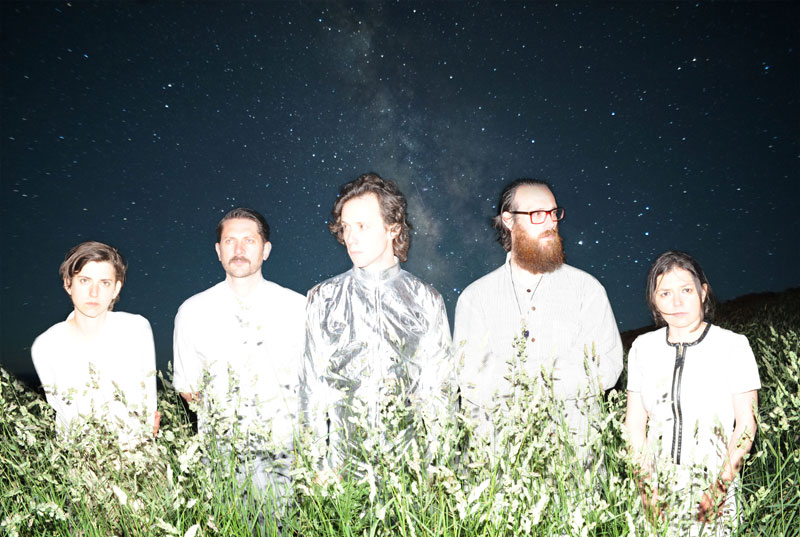 Just before escaping waterlogged England for much sunnier Spain, Simon Balthazar of Fanfarlo talked to QRO.  In the conversation, Balthazar discussed their new record, Let’s Go Extinct (QRO review), going back to self-releasing, festivals, not being just two guys & a laptop on the road, touring wet U.K., being big in Spain thanks to their French name, and more…

QRO: How does it feel to have Let’s Go Extinct out?

Simon Balthazar: It feels really good.  It’s been a long build-up, you know?

We recorded it last year, recorded loads of songs.  We went back to a studio we really liked, sort of tucked away in Wales; it’s called ‘Bryn Derwen’.  It’s a ‘dying breed’ – it’s a residential studio in the countryside.

We recorded the skeleton of loads of music there.  Then we went to this house that’d been staying empty for twenty years, that a friend had bought; it was a bit of a construction site when you come up to it.  We spent four weeks there, something like that, built a temporary studio, and just did loads of work on the songs.  Just kind of had a bit of a bubble around ourselves.

This is like a year ago, now.  Then we sort of took our time mixing it, talking to various labels, and in the end we decided to self-release it.  It’s been all this stuff, leading up to where we are now.  It feels really good; it’s just been a lot of work.  But we put out an EP end of last year, and now the album’s finally out.

I should say that we’re self-releasing it in Europe and the rest of the world; not in the U.S.

It’s funny – it’s kind of taken us back to how the band started, really, everything was self-released.  If it wasn’t self-released, it would be a limited seven-inch on a major label.  When we released our first record (Reservoir – QRO review), it was before we were signed to Atlantic, self-released a run of it.  That was us going with bin bags of records to the post office, pissing people off there, (laughs) all the pensioners waiting for us to post records all over the world.  And we’ve kind of come back to that experience now, at least for a short while.

It’s good.  Now there’s like an entire table with records spread out, and just signing them and putting them in envelopes, handwriting addresses to people in Argentina and Japan and Holland – just everywhere.

That was us going with bin bags of records to the post office, pissing people off there, all the pensioners waiting for us to post records all over the world. And we’ve kind of come back to that experience now, at least for a short while.

QRO: Why did you decide to go back to self-releasing?

SB: We found ourselves without a label.  We came off doing a couple of records with Atlantic, and it was a pretty painful experience (laughs) – as we kind of knew it would be.  Being on a major label means kind of security, to an extent, but it’s also a fucking nightmare… (laughs) They just have no sense of priority.  They have their priorities all upside-down, and it’s a big corporate structure.  It just means that you can fund touring and stuff like that.

We were sort of in-between labels now, and we talked to a bunch of different people, but in the end what made sense was to, outside of the U.S., just do our own thing.  I guess a lot of people are finding themselves in that.  And it’s hard work, but it’s really satisfying at the end of the day.

QRO: How did making Extinct compare with making prior records?

SB: We’ve always been lucky enough to be able to go into proper studios and spend some time, ‘live’ in the studio, in various ways.  Our first record, we went over to the States for the first time to make that record.  The second one (Rooms Filled With Light – QRO review) and the third one, we both stayed a fair bit of time in a residential studio in Wales, the one I was talking about.

This record, we didn’t have a producer, as such.  We did have a co-producer in David Wrench, who engineered the previous record.  We really liked to work with them.  So we had someone in there to help us– generally, we have too many ideas, is our problem.  Which can be a really nice problem to have, but you have to narrow down what you’re doing.  That’s the best thing, that’s where you need an outside voice.  So we had David Wrench on board to do that, in the sort of skeleton phase of the record, and then we fleshed – once we set some limitations, we spent a good deal more time.

I felt like we were much more doing our own thing, this time: we didn’t have a label, we didn’t have a producer.  We just created a bit of a bubble around ourselves, best way I can describe it.  Kind of created our own world a little bit, and just let it happen.  And that’s the way it should be, I think.  But the whole experience of just constructing your own thing is really great.

Lyrically, the whole album came together quite quickly.  It took a while to finish it up, mixing and stuff.  But the conception of it was quite quick, quite cohesive.  It felt like we were all on the same page, knew what we wanted to say.

I’m not sure I can sum it up, just kinda letting go and just letting it happen.

Being on a major label means kind of security, to an extent, but it’s also a fucking nightmare…

QRO: Was there less pressure on this one, since it was neither your debut full-length, nor the follow-up?

SB: There’s always the pressure you put on yourselves.  We’ve always tried to sort of shelter ourselves from the rest of the world a little bit, but I think that was easier to do this time.  We really tried to not really think about that, not really think about whether we should put any pressure on ourselves.  We just felt like we had a story to tell; we just created our own little environment to do that, and came out as this science fiction record. (laughs) And we’re all quite happy about it.

QRO: Speaking of that, did you make The Sea EP before or after making Extinct?

SB: It was part of the same process.  We had too much music.  We were really debating whether we should make a super-long album.  Again, it’s like an editing choice.

In the end, we’ve been wanting to make an EP for a long time.  Quite like the format of it.  We just kind of realized that, ‘Oh, it’s gonna have to be an EP, and then a record.’  We’re really fond of that song as well, so it’s kind of nice that it’s found its own home.

QRO: Are you already thinking about the next album?

Like I said, it’s been a long journey with this record.  Haven’t started with it yet.  We’ve got literally two months of solid touring ahead of us, so I imagine I’ll be doing a lot of staring out the window, and reading, and thinking about what’s around the bend.  But first things first.

QRO: How were your recent U.K. dates?

SB: They were good.  They felt like the start of something.  We’re really good live; I think we’re better than we’ve been live, ever.

Whereas Spain is an amazing place to tour!  They really take care of you.

The U.K., it’s really the toilet circuit, shitty punk venues, and no dressing room, and…  There’s just too many bands here, I think.

QRO: Were you hit by any of the flooding going on right now there?

It’s a funny situation, that, with the flooding.  I probably shouldn’t get into it, but it’s really an infuriating situation.  It’s not just bad weather; it’s really down to really bad politics.  There’s a lot of really stupid politics that led up to it, deforestation…

QRO: You’re about to head out on a European tour, starting with five dates in Spain – why so many there?

QRO: But ‘Fanfarlo’ is French…

Yeah, I dunno – people love us in Spain, and we love them back.  We get to go there a lot.

QRO: With all of your different instruments, is touring difficult?

There’s a funny thing that has happened over the last few years.  We started out as a six-piece; we’re a five-piece now.  When we had six people on stage, when the band first kinda came together, I thought it was the most normal thing ever, to have loads of instruments and people.

It’s not that many years ago, but already now, I feel the change.  Where all the bands?  It’s just two-pieces & a laptop now, because no one can afford to tour.  It’s really the way live music has gone, you know.  And people are now like, “Oh wow, you’ve got five people on stage!  Oh my god, you actually play instruments?  That’s incredible!”  It’s almost become a bit old-fashioned.

So, to answer your question, yes…

SB: I remember that.  The only time it was ever freezing in Austin…

QRO: What do you think of ‘industry’ festivals like South-by-Southwest?

SB: How do I say this?  You can have fun at South-by-Southwest; there’s a lot of stuff going on, but as a concert, it kinda sucks.

I guess SXSW, I was never there in the early days; by the time Fanfarlo started going, it had already– we both know what the criticism is, we both know what people say about it.  It’s just the way that things go, I guess.  Things that start as something kind of small, and heartfelt, and genuine – once they become popular, people rush in with corporate sponsorship, and it becomes a big commercial circus.  SXSW is not the only festival like that; there are European ones, and there are U.K. ones.

People like to go to them, great.  I think it’s strange, strange to treat music as a sort of ‘trade conference’.  What can I say?  It’s weird, it’s weird, and I’m unsure about it, I have to say.

Having said that, it’s a blast to go.

QRO: When the weather’s good…

SB: When the weather’s good…