Simple Minds, the most popular Scottish band of the 1980s, returned to rock Atlanta’s Tabernacle.... 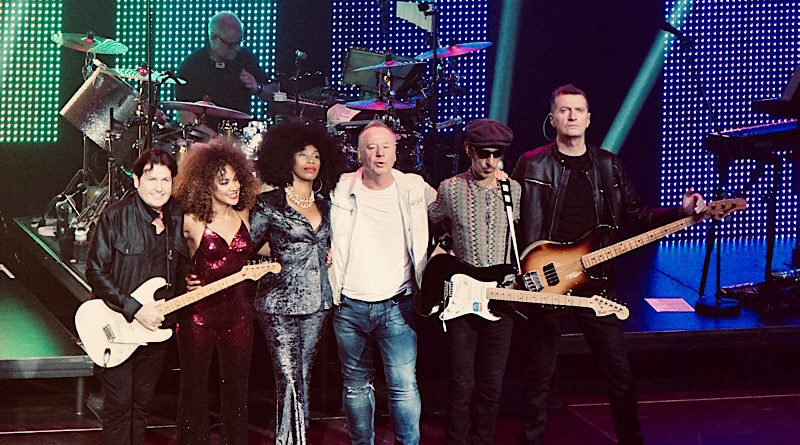 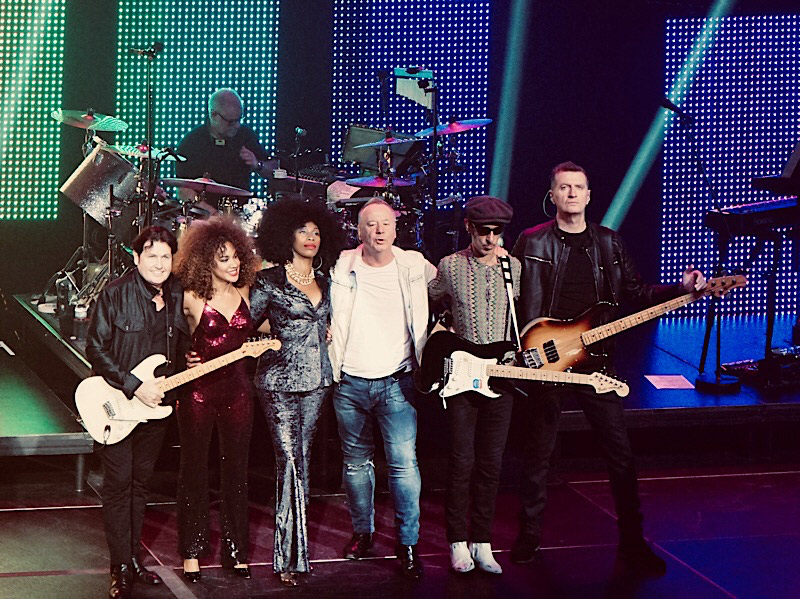 Simple Minds, the most popular Scottish band of the 1980s, returned to rock Atlanta’s Tabernacle on Tuesday, October 8th. Jim Kerr, the frontman, was not just a singer, but also a dancer, crowd rouser, and charming jokester who is gracious to his bandmates. He led the band for two full sets in a full evening of 40 years of the band’s wonderfully memorable music as well as new songs from their 18th album, Walk Between Worlds.

Kerr was quite agile, and by the second song, sat on his feet onstage, leaning backwards completely lying on his back on the floor, then rising up. Then did the same thing again about an hour later. He danced and squatted onstage a lot. Between songs, the entire band came to the front of the stage, and Kerr thanked the audience repeatedly for coming out.

Simple Minds are best known in the US for their song “”Don’t You (Forget About Me)” from the movie The Breakfast Club. But Kerr told a funny story about someone who did forget. He said to the audience, “It’s been so long, I didn’t know if you’d remember us,” although the venue was quite full. “Once a lady said to me, ‘You’re in a band.’ ‘Yeah,’ I said.”

“The lady said, ‘Simply Red. I remember your videos and you were thin and had hair.’” Then Kerr looked at the audience. “It happens to all of us, right?” There was a lot of laughing and cheering. 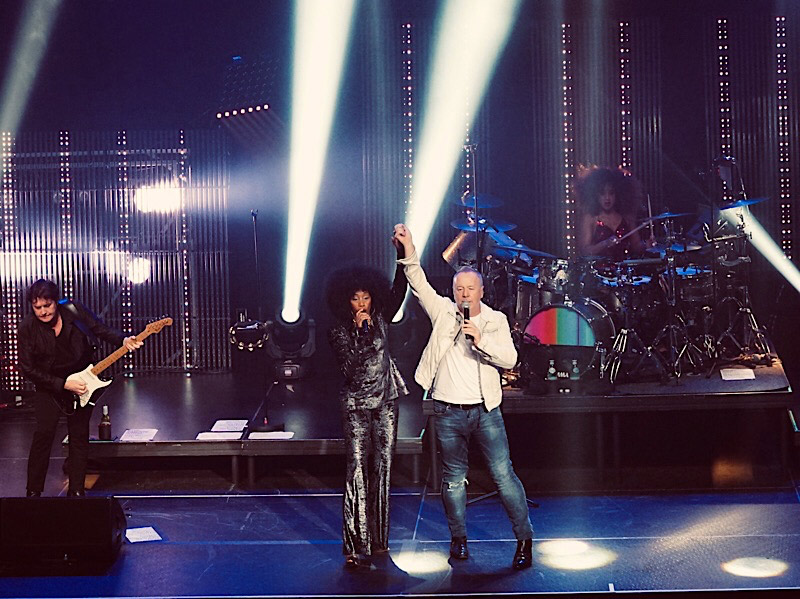 On “Love Song”, Kerr brought backup singer-percussionist Sarah Brown to the front for a duet. Her vocals were quite strong and put a lot of soul into the entire night’s performance, so it was wonderful to see her spotlighted.

The entire six-piece band was terrific, playing tight but allowing for some fun, such as switching places on stage and laughing at each other. Founding member guitarist Charlie Burchill was on electric guitar, and his hollow body with whammy gave a mysterious, beautiful sound; he also played keyboards when needed. The second guitarist was Gordy Goudie, sometime rhythm guitarist for Echo & The Bunnymen, who also played keyboards when needed, as well as holding up his acoustic guitar and jokingly pointing the headstock at the audience. That silly act made solid bassist Ged Grimes laugh over and over. Rounding up the talent was hard-working drummer Cherisse Osei. After introducing her to the audience, Kerr asked about her favorite song on the new album, then the band played the song, “Sense of Discovery”. Afterwards, Kerr said that he was telling songs between songs “to catch our breath.”

Kerr played to all sides of the audience, sometimes shaking people’s hands. He delightfully pointed and waved to everyone on all levels, clapped a lot, spun the mic around above his head, pointed the mic at the audience and made high pitched tongue trills occasionally.

Highlights of set one included “The American” with its backing video, and a strong delivery on “Stand by Love”. Kerr called out to the band, “Lead the charge as we unleash the dogs” before “Hunter and The Hunted” and the talented Sarah Brown returned to sing the main part of another duet with Kerr on “Dirty Old Town”. 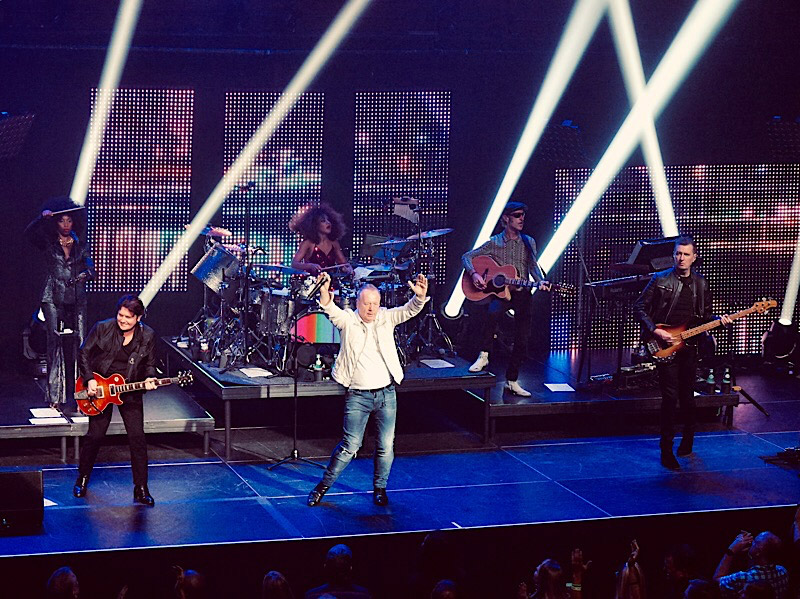 After a short 15 minute break, just long enough for a couple of clothes changes, the band returned without Kerr for a rocking rendition of “Theme for Great Cities”, a long instrumental jam with drummer Osei on mallets. Moving right along, “She’s a River” kept a nice up-tempo beat. Next up was the short, punchy, upbeat “Walk Between Worlds”, with its singable, repeating chorus and slowdown at the end. This pleased the crowd, who applauded loudly. Not slowing down, the band went straight into “Someone Somewhere”, which had the crowd singing along, and “See The Lights” which included Kerr’s highest pitched singing yet, but was soulful.

The stage went dramatically black for the intro of “Dolphins”, with its double keyboards, and moody, golden lighting. Kerr’s first verse was sung offstage, then he came in from the left wing in another shirt change, slowly dancing as he sang, ending the last line solo with his head back in a white spotlight.

The tempo shifted again as the band went right into “Don’t You (Forget About Me“. There was lots of singing along, and Kerr livened up the chorus by asking the enthusiastic crowd to do the chorus part “La, la la la la” in French, Spanish and Japanese! So funny! Then he said, “Thank you for making us feel like rock stars.” The band went straight into “New Gold Dream” with swirling white lights all around, a fast dance-like percussion beat but slow lyrics. Bassist Grimes sang backup.

They left the stage to raucous applause just for a minute, coming back, saying, “We don’t want to leave!” Goudie played harmonica and Brown was again at the front of the stage with Kerr on a cover of The Call’s “Let the Day Begin”. “Alive and Kicking” started the audience clapping on its second verse. Brown came out front again for the female solo.

Kerr announced “Sanctify Yourself”, which was a nicely jazzed up version. He again said many thank yous, and the band members all waved as they left the stage. 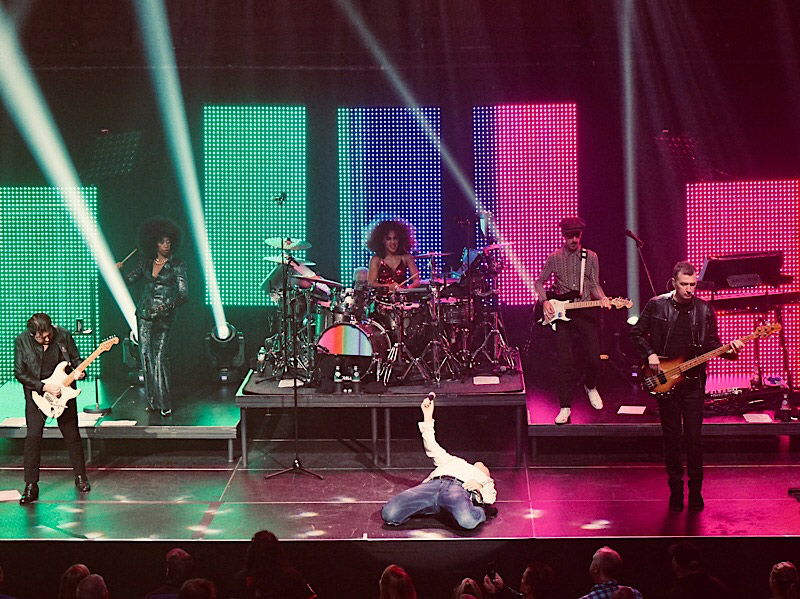