As I write this, days later, in the aftermath of endless energy and some kickass music that is Slam Dunk Festival, I’m still finding bruises I didn’t know I... 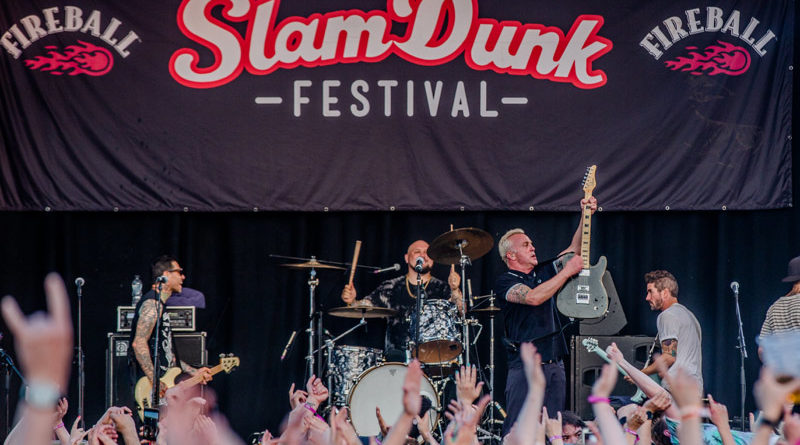 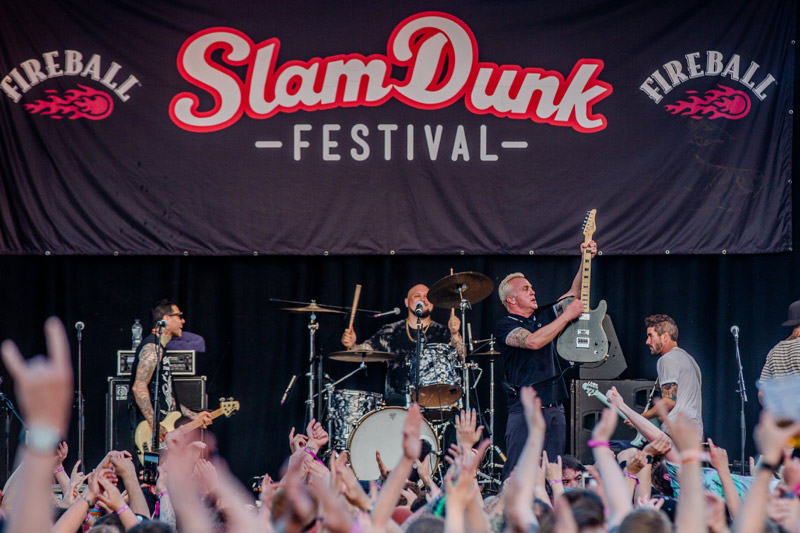 As I write this, days later, in the aftermath of endless energy and some kickass music that is Slam Dunk Festival, I’m still finding bruises I didn’t know I had.

In what may be seen as untimely works around Birmingham New Street leading to a severe lack of trains on a very busy weekend, led to a rush to make it to the opening bands of the third and final leg of the festival, taking place at the NEC in Birmingham on Monday, May 28th. Full of excitement and nerves at seeing some bands who have long been my favourites, and some who have recently made a name for themselves and earned a place on my list of ‘bands whose songs I must learn on guitar,’ I didn’t quite know what I was in for at my first Slam Dunk Festival. 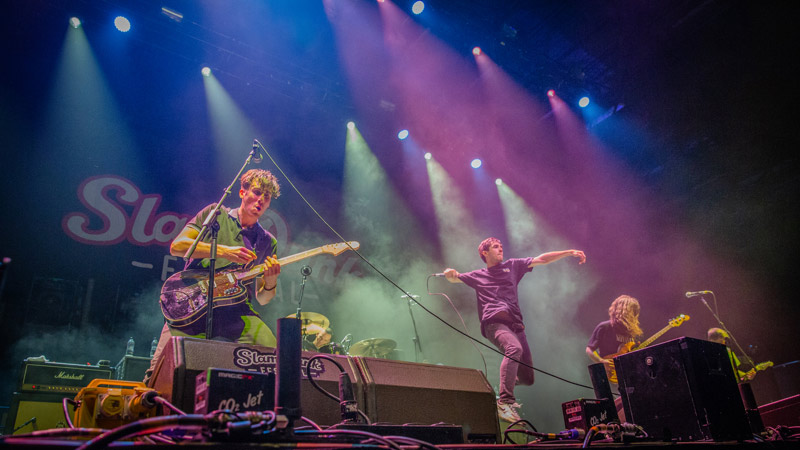 Knuckle Puck have been a personal favourite of mine since I discovered them after the release of their late 2017 album Shapeshifter. Arriving at the NEC at approximately 1:32pm (baring in mind Knuckle Puck’s set began at 1:30pm), I made my way throughout the venue avidly searching for the Jaegermeister Stage (I actually ran) and arrived in time to hear the third song of their set, “No Good”, one which has been on repeat on my Spotify account for the past few weeks. I had wormed my way to the front by the end of the song, at which Knuckle Puck then began “Want Me Around”. Now, being a huge Knuckle Puck fan and avid guitar player, a little part of me was hoping they would bring a fan up on stage to play this song (the ego on me likes to think that I can play this song to perfection – however if it had happened, their guitarists are right handed, whilst I’m left, so that would have been a disaster). With the rest of their set comprising of songs from Shapeshifter and Copacetic, they closed with the gritty and fast paced “Pretence”. Honestly, they were incredible; I should also add that playing whilst playing such a large stage, their guitar tone, percussion, and vocals were absolutely on point, it really was comparable to the album versions in terms of their quality. 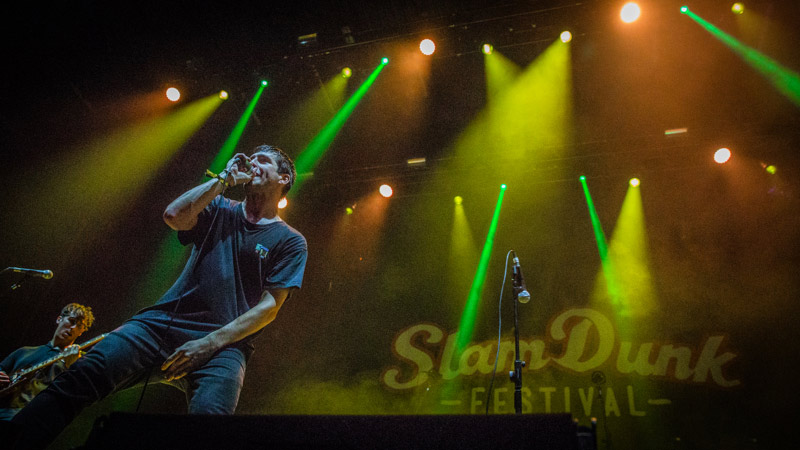 I recently spent a year living in Philadelphia, USA, and whilst over there, discovered a huge amount of artists I had never heard before from the ‘Pop Punk’s Not Dead’ playlist. One of these bands was Grayscale – residents of Philadelphia, notable for some of their hits such as “Atlantic” and “Palette”. Grayscale put on a stellar performance on the Rock Sound Breakout Stage, and I’m sure they will have left with a much larger U.K. fan base than when they arrived. Their lead singer, Collin Walsh, also took the time to talk to me; we both studied at the same University in Philly, and support rivalling baseball teams, leading to some bantering back and forths. 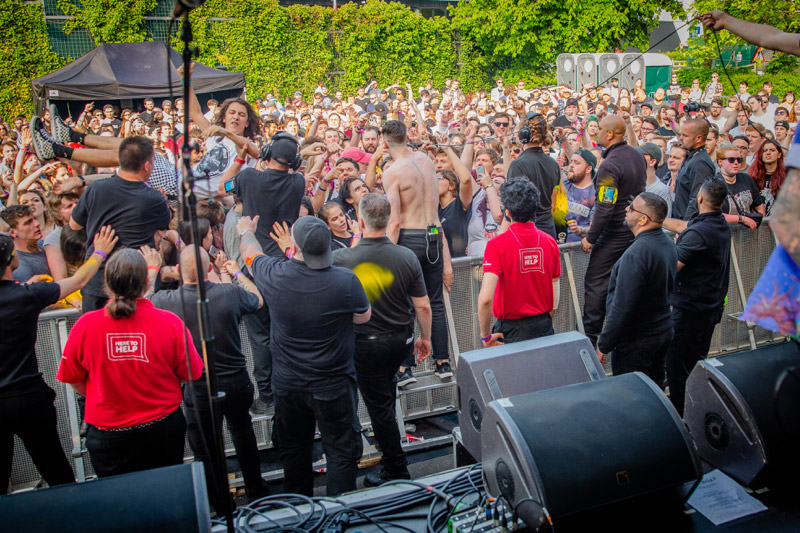 Roam are a band I have now seen four times in the past nine months or so (having never seen them previously). One thing I really don’t get is how they manage to put on a better show every single time I see them. This appearance was included quite a few inflatable beachballs and lilos, which people were quite literally crowd surfing on – incredible. Their set included classics such as “Hopeless Case” and “Deadweight” (which always get a circle pit going), as well as a medley of tunes from their 2017 album, Great Heights and Nosedives. I expect the fifth time that I see Roam will be even better. 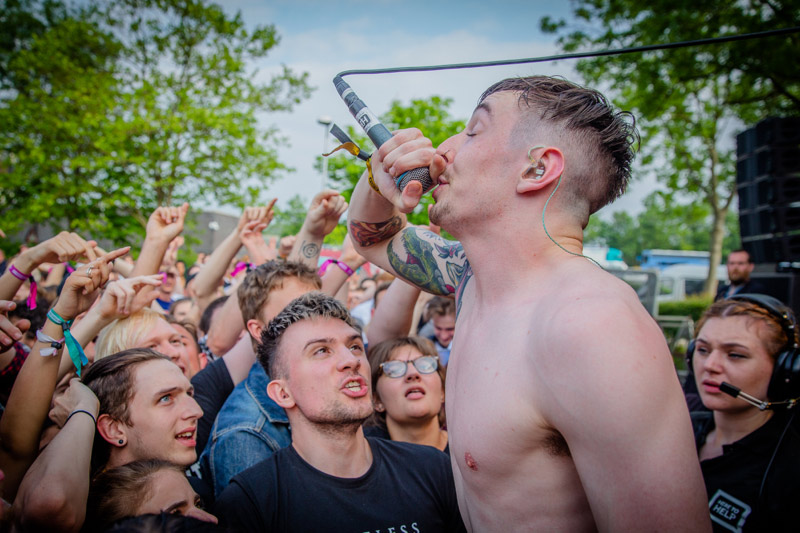 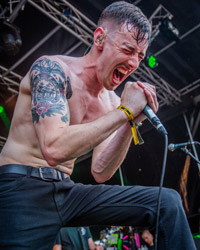 As the end of the festival was getting nearer and the sun was slowly setting, the energy around Slam Dunk didn’t fade one bit. The Signature Brew Stage hit capacity multiple times throughout the day, and Trash Boat didn’t disappoint, as they kicked off their set with the iconic riff of “Tring Quarry” (a song that is way too fun to play on guitar). The crowd surfing increased, the mosh pits increased, and the circle pits increased. “Shade”, their recently released single from their upcoming album was a banger. A slightly more grittier and heavier song than normal, but nevertheless incredible. Trash Boat’s energy was relentless, and they closed their set with the hit “Strangers” (sadly Dan Campbell from The Wonder Years didn’t magically appear to sing his verse). I can’t see myself not seeing Trash Boat whenever next possible. 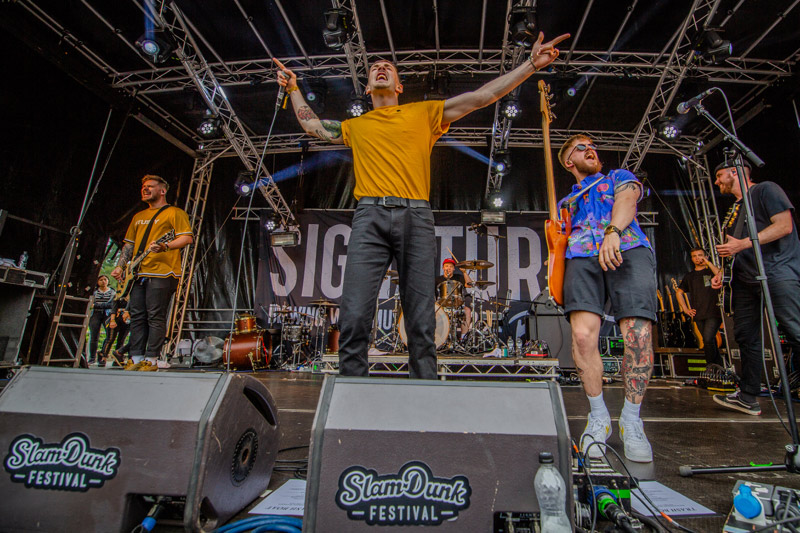 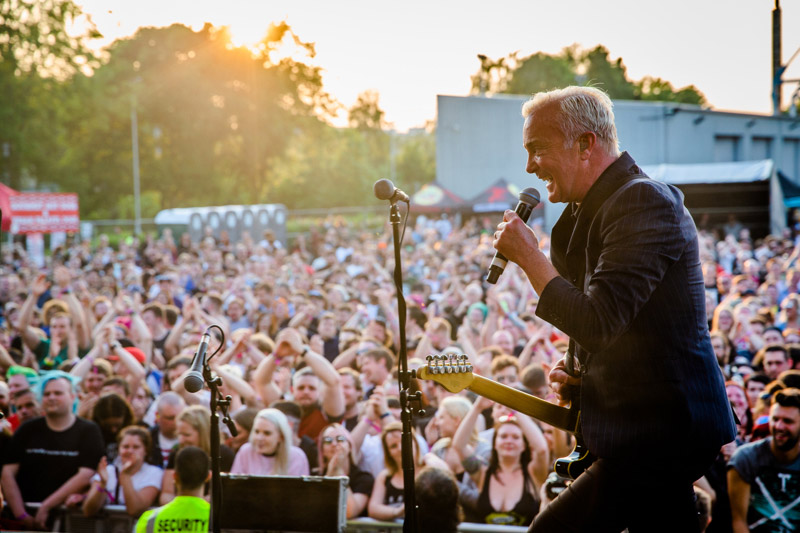 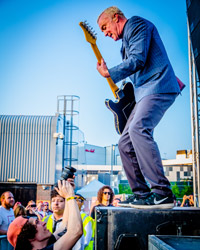 Goldfinger, the iconic ska-punk band were one of the big reasons I had to go to Slam Dunk. I’d seen countless videos of John Feldmann’s energy on stage, as well as him spending full songs crowd surfing whilst playing. Goldfinger opened with the classic “Spokesman”, immediately forming a 100-person circle pit, which must have reformed every other song. Inflatable beachballs were also (again) thrown into the audience (who doesn’t love hitting a beachball as hard as they can?). Their set also included other classics such as “Get Up”, “Here In Your Bedroom” (with that iconic bass riff) and “Superman”, as well as a collection of songs from their latest album, The Knife (“A Million Miles”, “Put The Knife Away”). Goldfinger closed their incredible set with the famous “99 Red Balloons”, which sent the crowd wild – I must have crowd surfed about four times during that song alone. Frontman John Feldmann also took the time to talk to me and take a photo before the show (of which I was incredibly nervous having been hyping Goldfinger up all day), as well as Mike Herrera (also of MxPx). Thanks guys. 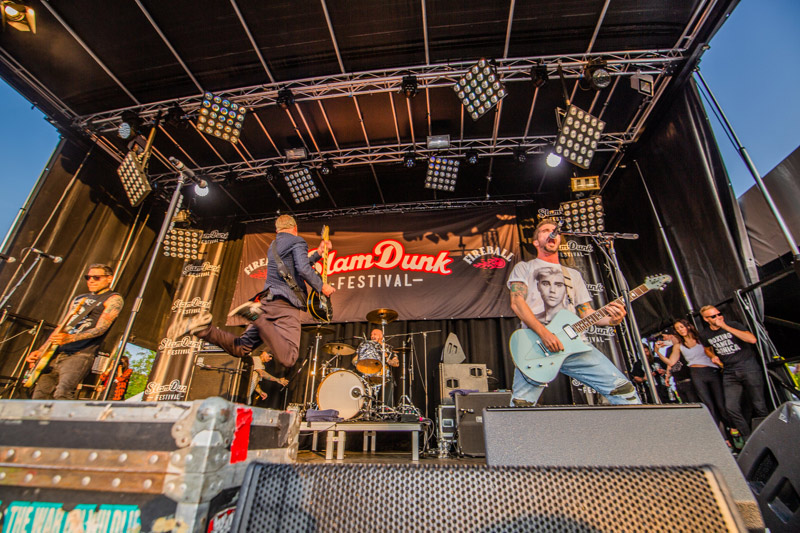 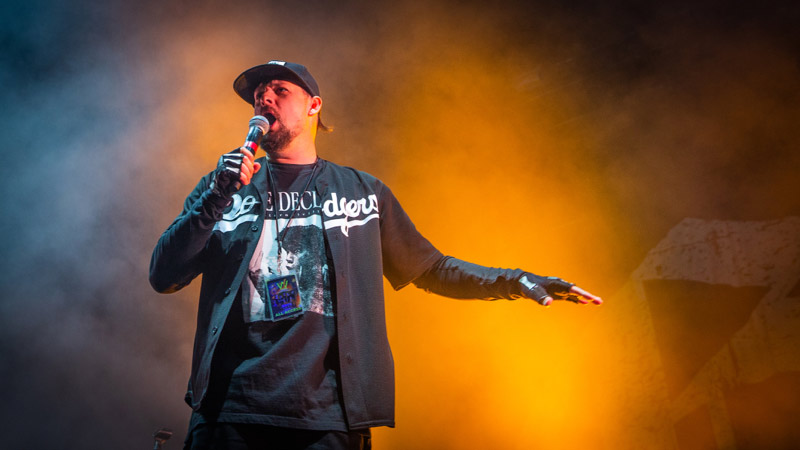 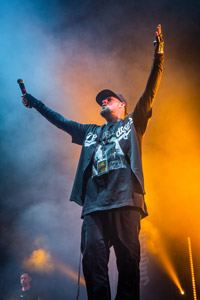 Good Charlotte put on one of the most incredible light and smoke show performances possible. It was a tough choice whether to see Good Charlotte or Jimmy Eat World due to their sets clashing; having seen both before and Good Charlotte being one of the bands I grew up with; I had to go with them. The classic “American Pie”-esque “The Anthem” sent the crowd wild to open up the show and they played a collection of their biggest hits such as “Keep Your Hands Off My Girl”, “Girls & Boys” and “Dance Floor Anthem”, along with their newest single “Actual Pain”, which sounds like it’s going to be a similar style to their 2016 album Youth Authority, but slightly heavier. This was definitely the best Good Charlotte performance I have seen, and I have no doubt that this is in part due to the fantastic venue and the crowd’s energy and enthusiasm. I will always see a Good Charlotte show whenever possible. Always. 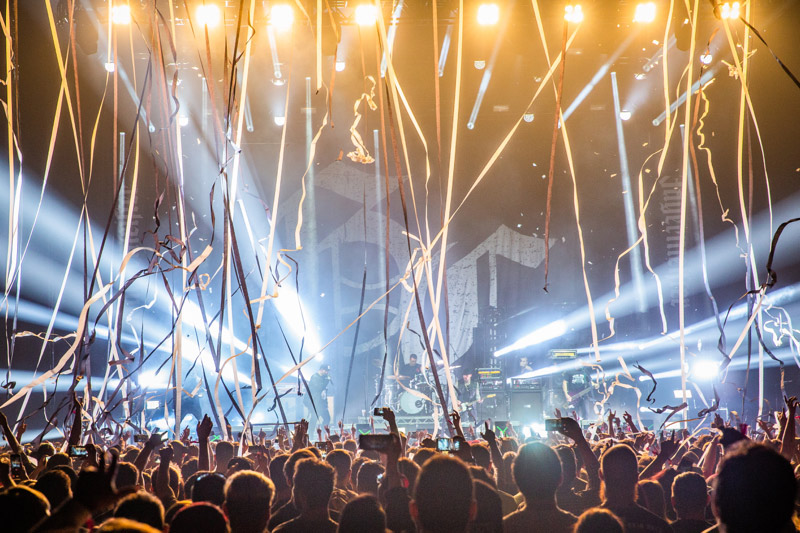 With the Vans Warped Tour coming to an end over in America, this is the chance for Slam Dunk Festival to really shine and to really bring the genre into the limelight. Kickass music, high energy, people wanting to have a good time, and you’ve got yourself a Slam Dunk Festival. Be sure not to miss next years. I won’t. 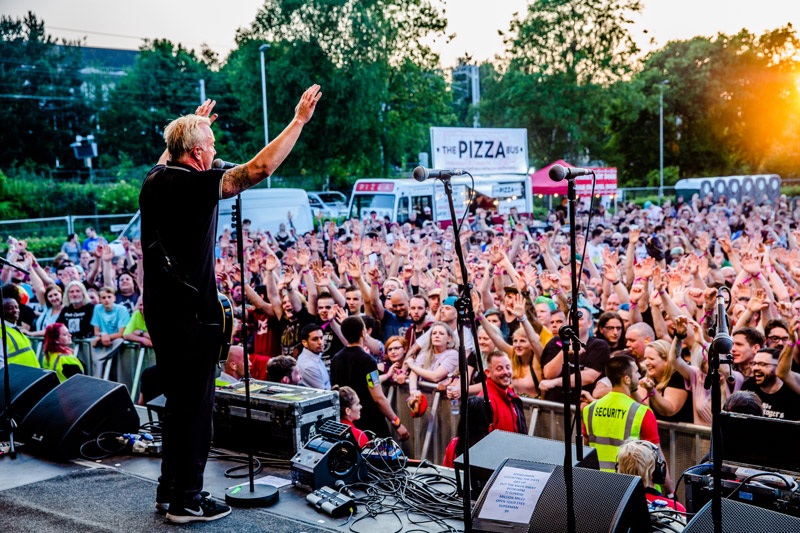