The metal gods known as Slayer entered The Bayou Music Center in Houston to play for their faithful fans.... 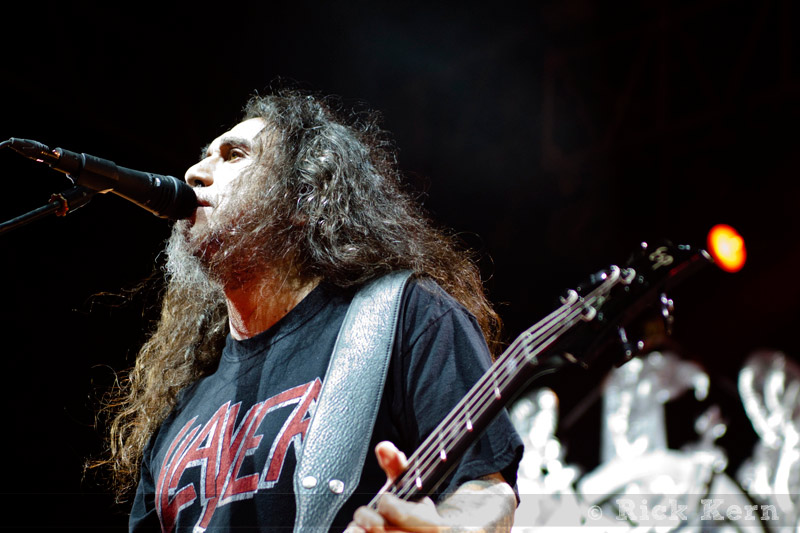 Click here for photos of Slayer at Cellairis Amphitheater in Atlanta, GA on August 10th, 2018 in the QRO Concert Photo Gallery

Click here for photos of Slayer at 2013 Fun Fun Fun Fest in Austin, TX in the QRO Concert Photo Gallery

Click here for photos of Slayer at 2012 All Tomorrow’s Parties in London, U.K. in the QRO Concert Photo Gallery

Click here for QRO’s review of Slayer as part of the ‘Big Four’ at Yankee Stadium in The Bronx, NY on September 14th, 2011 in the QRO Concert Photo Gallery

The metal gods known as Slayer entered The Bayou Music Center in Houston, TX on Tuesday, November 12th to play for their faithful fans.  For me, Slayer is the group that has been scaring the shit out of me since I first heard the song “Raining Blood”.  With song titles as such, it was no wonder why I found myself watching the show from 40 feet away.  Lead guitarist Kerry King, one of the most talented acts in metal, was a force that is not to be trifled with.  I found these words entering my head as I watched him lay waste to the stage along with bassist and lead vocalist Tom Araya, drummer Paul Bostaph and guitarist Gary Holt.

When it comes to Slayer’s song titles, you can pretty much guess the first to the next.  Starting the show off with “Hell Awaits”, Slayer took the stage and prepared to take us all to the underworld.  Some of the other songs that followed were those such as “The Antichrist”, “Captor of Sin” and “Die by the Sword”.  I had no idea what to expect, but after seeing Slayer I can truly say I have a new appreciation for the word “headbang”.  I’ve never seen someone play guitar so fast while headbanging so flawlessly as King did.  I literally thought he might burst into a pit of flames at one point.  Although Slayer was a mighty force, they had the crowd in an undying, metal trance.  Even from 40 feet back you couldn’t deny the strength of this crowd, which ranged all the way from nine-year-olds to late ‘40s, and even some old geezers were spotted in the crowd.  All had an appreciation for the mighty Slayer

My favorite moment of the whole show was hearing the opening riff to “Raining Blood”.  You don’t have to be a metal fan to appreciate the powerful riffs of this song.  I couldn’t help but feel myself head bang as both King and Holt began the menacing, guitar dueling intro followed by the heavy, ‘put you on your ass’ verse riff.  Rather than exit for an encore, Slayer continued to play up until the curfew ending their set on the jaw-dropping trio “Black Magic”, “South of Heaven” and “Angel of Death”.  Yes, the old school metal gods from the ‘80s still had it in them, as well as many great things in store for the future.  A new album is in works for 2014, marking Holt’s first ever appearance on a Slayer record.  If you can stand the heat from the flames of hell, the bloodthirsty fans and Kerry King’s stare of death, I’d say Slayer is an act that is not to be missed.