Like a preverbal battering ram, ‘The Mods’ are kicking down doors and crashing on through and let loose following months and months of being locked up and unable to... 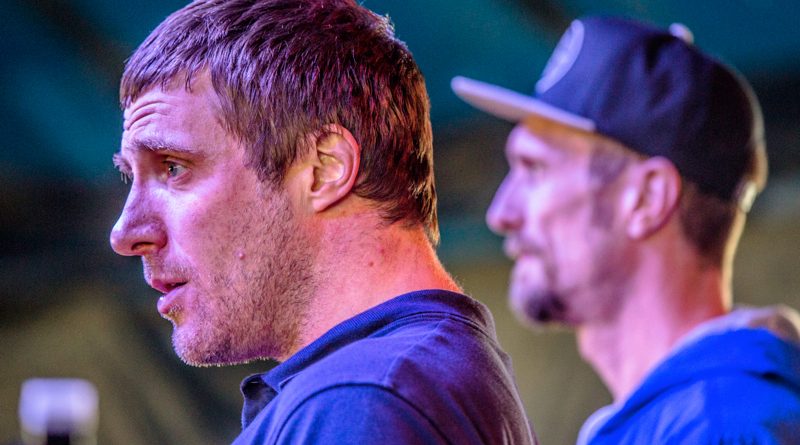 Nottingham’s finest, Sleaford Mods, are on a lengthy tour of the U.K., coming to Bristol O2 Academy on Wednesday, December 1st. Like a preverbal battering ram, ‘The Mods’ are kicking down doors and crashing on through and let loose following months and months of being locked up and unable to play some gigs. They are angry and have a lot to get off their chest.

The boys kept busy during this enforced hiatus and have just released their 11th album Spare Ribs to rave reviews and by the looks of things, it will be in several ‘2021 Best Album’ charts, and this night as they played to another sold out venue, the stirring thing for the duo is that tracks from the new record were as enthusiastically received as some of the old favourites tonight.

All was set with a crammed venue of punters desperately trying to get a good vantage point. A real mix of people in attendance from ‘crusty’ punks to middle aged office types, to indie kids but mainly a 40+ crowd.

The stage was drenched in royal purple lighting everywhere flanked off at the back by with what looked like a satin glittering backdrop. However, I was soon to find out it looked more like some translucent plastic sheeting with a back of simple lighting behind it. Either way, the stage was reduced in size with a solitary mic stand and a table with a laptop on it.

The Sleaford Mods duo took to the stage to a roar from the crowd. Both were dressed casual in loose fitting t-shirts. No glamour or posing, just two regular fellas who were not really looking to play the part of some big pop/rock sensation. However, after successfully releasing eleven albums and selling out venues, the Sleaford Mods are doing very well without appearing to join in with all the showbiz nonsense. Maybe that’s what appeals? The ‘ordinariness’ of ‘The Mods’ and the message they have to deliver in what is often a straightforward two fingers to anyone who pisses them off.

Before things got going, there was a message for everyone to respect the women present (the venue was certainly not male dominated) and a clear message for people to keep their hands to themselves and no “groping.” People who do this need to have a good look at themselves and they were not welcome, Williamson proclaimed to the approval of the crowd.

Frontman Jason Williamson is a charismatic man who throughout wandered around the stage mic in hand like an undiagnosed adult suffering with Attention Deficiency Hyperactive Disorder (ADHD), unable to stay still, twitching, waving arms suddenly. His lyrics were spat out with venom and directed like a power hammer hitting home the message.

To his side was Andrew Fearn, armed with his laptop on a simple table. His evening was spent pressing start for the next track and then dancing wildly about getting the audience going. The Sleaford sound is a real concoction of bass and drums that ensures the audience kept on grooving throughout the set.

There was a good number of songs from Spare Ribs amongst the 23 strong set, including for starters the mellow calm “Fishcakes”. There were not going to be anymore ‘calm numbers’ within the set and we were off up and running at pace.

Other highlights were “Middle Man” from the 2014’s Divide and Exit, with blue pumping lights and the massed audience jiving in time to the beats as Williamson outlines the nonsense of consumerism.

Just before “Kebab Spider” from 2019’s Eton Alive, Williamson asked, “Bristol, what does it all mean?!” A great track with a grumbling bass and the audience joining in on the chorus of –

“Jolly Fucker” off of last year’s All That Glue was just straightforward riotous and frenzied track, with BPM through the roof and blistering angry and beautifully presented sarcastic lyrics from Williamson who chucked in some ‘can-can’ style high-kicks as he careered around the stage.

Biggest cheer of the night went up for ‘Billy Nomates’, who joined the band on stage for Spare Ribs’ “Mork N Mindy”. She oozed coolness and went down a storm as an adopted Bristolian. Billy Nomates… AKA Tor Maries, lived in Bristol for a while and recorded her self-titled debut album with Portishead’s Geoff Barrow in the city.

At the end Williamson asked the audience, “You enjoying yourself Bristol? It’s good to be back. It’s been too long!”

“Jobseeker”, with some of the greatest quick-witted lyrics in the history of music, saw the crowd surfing dominated by female participants much to the amusement of Williamson, who said afterwards that he loved it down here. “I wanted to go out for a walk earlier but was too knackered.” He expressed his thanks to everyone for coming out and then Sleaford Mods closed proceedings with “Tweet Tweet Tweet”, which ensured any last energy left in the room was used until empty.

With the usual glamour to the end, all that was left was for Fearn to pack his laptop away in his rucksack which he swung over his shoulder. A quick wave and a victory sign to the adoring crowd and he was off to slay the next city.

Click here for QRO’s review of Sleaford Mods at The Asylum in Hull on March 7th, 2019

Click here for photos of Sleaford Mods at Spanky Van Dykes in Nottingham, U.K. on September 14th, 2014 in the QRO Concert Photo Gallery