Over to Asylum on the Hull University campus for LIINES and Sleaford Mods, and I’ll admit to an almost childish level of excitement.... 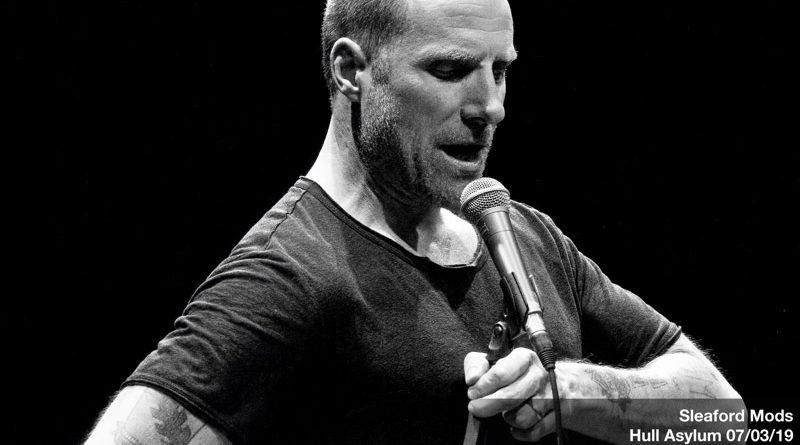 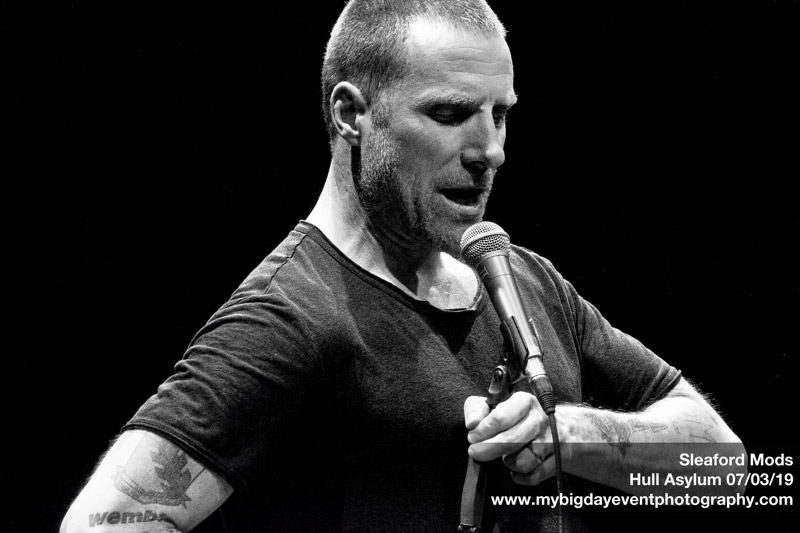 Over to Asylum on the Hull University campus for LIINES and Sleaford Mods on Thursday, March 7th, and I’ll admit to an almost childish level of excitement. They’re both bands I’ve read a lot about, listened to a lot but never seen live and they both have a reputation for excellent live shows. 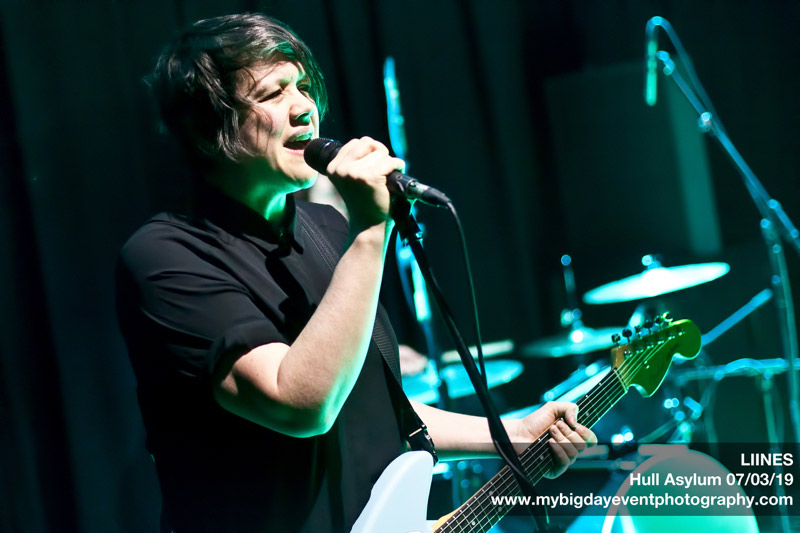 There’s been plenty written about Manchester trio LIINES in recent months and the most common description used of their sound is “powerful post-punk.” This description seems to have the blessing of the band themselves so I’ll go with it.

They’re not your usual ppp exponents though. It’s a genre that often favours brute force over subtlety, but LIINES have a deft touch that makes a refreshing change, with some remarkably subtle bass from Tamsin Middleton blending with Leila O’Sullivan’s incendiary drumming. Add some remarkably controlled vocals from singer/guitarist Zoe McVeigh and the nearest comparison is to Sleater-Kinney, although McVeigh reminds me a lot of Kristin Hersh, which in our house is considered to be no bad thing.

This isn’t to say that they don’t have the raw energy we love, they’ve got that in bucket loads – it’s just that LIINES have other stuff too. If you haven’t crossed paths with them yet then check out “Shallow” on You Tube – https://youtu.be/C_EqNF2IyzE – two and a quarter minutes of excellence. 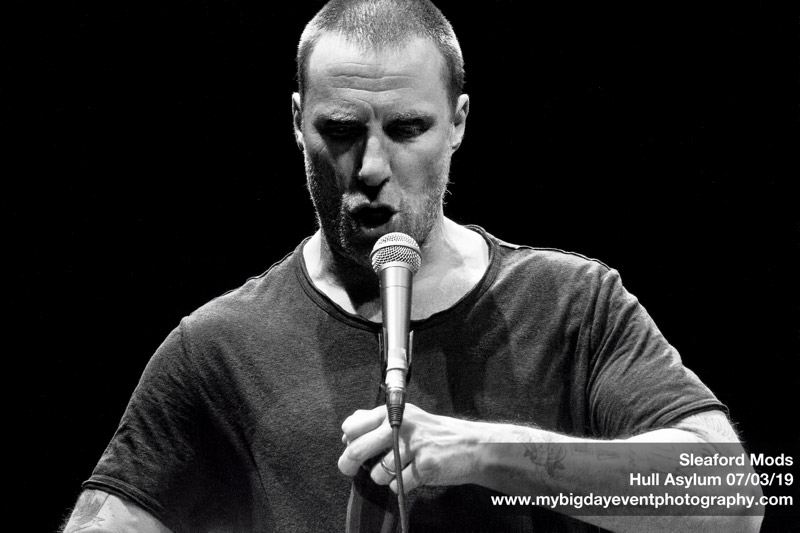 Click here for photos of Sleaford Mods at Spanky Van Dykes in Nottingham, U.K. on September 14th, 2014 in the QRO Concert Photo Gallery

Once LIINES have cleared up their stuff it didn’t take long to get the stage ready for Sleaford Mods. Andrew Fearn, the provider of the beats, set up his laptop on a box and takes up the position behind it, nonchalantly swigging beer from a bottle. He looked amused and once he was joined by Jason Williamson, there was a huge roar from a crowd for whom this was the first chance to hear live the material from the new album Eton Alive. They wasted no time on trivia and launched straight into “Into The Payzone”. It was as bitter and rage fuelled as you’d expect and that goes for most of the rest of the set too.

Like I said, it was my first visit to the Sleafords live, although I’ve been listening to the new album, Eton Alive, on rotation for a couple of weeks. After English Tapas, it didn’t seem like they could go much darker and bleaker but they’ve managed it. I was expecting some rage, in fact a lot of rage, and I wasn’t disappointed in that respect, but what I wasn’t prepared for was the extraordinary delicacy of Williamson’s performance, both in respects of vocals and choreography.

I had imagined him standing motionless at a microphone and bellowing, but he is altogether more watchable than that, in fact he was seldom at rest, skipping on tiptoe across the stage, delicately raising and turning his foot on each step so that it touched the opposite knee. It gave him a strangely balletic gait, making him look like an angry Mr Tumnus.

It is customary to talk about the Mods as being a political band, but in fact there’s relatively little actual political content in their songs, other than “Policy Cream”. They’re pissed off and they’re bitter having a moan about stuff, but they’re not offering any detailed critique or possible solutions. 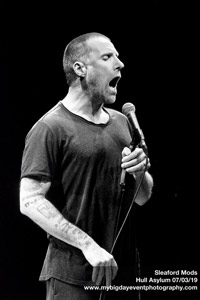 And while they’re undeniably angry, there’s much more to their performance than that. Williamson managed to convey an extraordinary depth of vulnerability, even on “Bang Someone”, even when he was crouching and hurling repeated expletives into the floor, he seemed remarkably unhappy and unthreatening. He looks like somebody the police would taser first and ask questions about later.

They were surprisingly funny too, particularly on subjects like it being safe to let children play with white dog shit, tolerance of hipsters and the joy of getting one over on the council by having an extra brown bin.

There were plenty of old favourites, including “TCR” (I had one of those) and “BHS” (Hull had one of them). Ah, those were the days. There’s a lot of melancholy and nostalgia in their set and we ended with “Tied Up In Nottz”, which pretty much brought the house down.

A great show, full of surprises and their music won’t ever sound quite the same again. 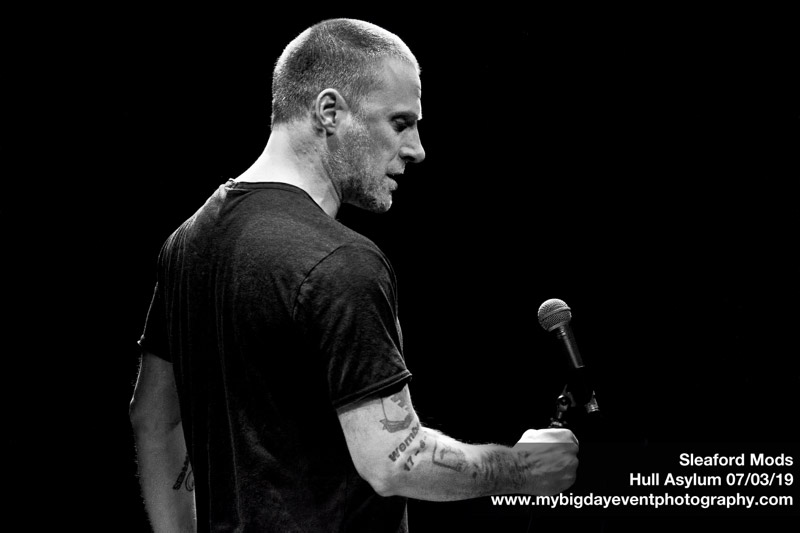