Set against the nauseous and turgid backdrop of the current “Britadelica” scene, it’s not difficult to see why Sleaford Mods are widely regarded as the most vibrant and yes,... 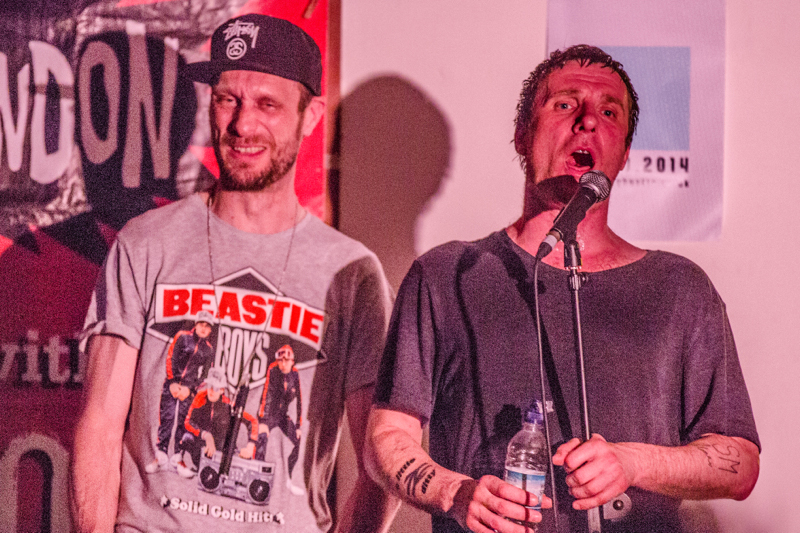 Set against the nauseous and turgid backdrop of the current “Britadelica” (© D. Hodgkinson) scene, it’s not difficult to see why Sleaford Mods are widely regarded as the most vibrant and yes, important band in the United Kingdom at this moment in time. Appearing at the student-friendly venue that is Spanky Van Dykes Nottingham on Saturday, 13th September, they weren’t so much as playing to the converted, more like to an audience that the thought of waking up with shit in their sock outside the Polish off license would send them scurrying back to mummy and certain rehab. They were the total antithesis of everything in “Mod” world with constant sly little sniggers every time Jason Williamson ranted out another expletive, the world of Prozac, cheap weed, micro waved food, cold sores and industrial strength lager is a completely different universe to what the lean, clean and well heeled audience were residing in.

In a recent interview in the Quietus Magazine recorded at the Chameleon Arts Cafe in Nottingham, the pair of Jason and Andrew Fearn discussed how they wanted to create a monotony of sound, almost a click track to allow Jason to spill his rage and rancour totally uninhibited. It is akin to the delivery of Mark E. Smith in early Fall recordings when he was haranguing us about industrial estates and addiction to prescription drugs (Rowche Rumble) where his manifesto was to “create the repetition, and never lose it.” Even their sub-normal musical cousins dealing in all things trash and grimy (Fat White Family) have succumbed to the power of The Fall and their current single is aptly titled, “I Am Mark E Smith”. Jason’s delivery was almost Tourette’s like, not only the foul language but also the nervous tic of brushing his head that occurred every time he became locked in to the sparse groove. The unsettling delivery was at a total counterpoint to Andrew’s nonchalance as he hit the play button on the laptop, which set Jason on his way with his next rant and roll, whereupon Andrew lifted a beer and enjoyed the crowd reaction for a couple of minutes. Songs were almost exclusively lifted from the last two albums, Austerity Dogs & Divide and Exit, and the vitriolic assault of songs such as “Jolly Fucker” and “Fizzy” was almost too much at times. Tracks such as the new single “Tiswas” and “Showboat”, where Jason sang rather than spewing forth his bile, were welcomed as a respite from the aggression and confrontational nature of the majority of the set.

It will be a major triumph if the band can succeed away from the shores of the United Kingdom, dealing as they do with a lyrical dissection of the underclass of the country in the early 21st century. But for now the mantle of best band in the country is their enviable and well-earned position.