Sleater-Kinney take on the kiss-off & more in 'Path of Wellness'.... 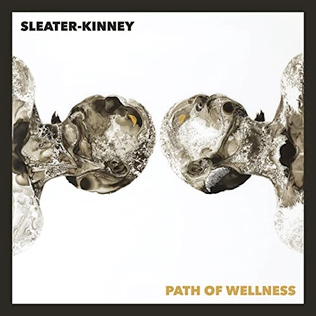 Nineties feminist alt-rock icons Sleater-Kinney’s 2015 return with No Cities To Love (QRO review) was a welcome one, and they haven’t gotten any less relevant since then. #MeToo and more have evolved from overdue hashtags to not just social movements but indeed new ways of looking at the present day. And Sleater-Kinney take on the kiss-off & more in Path of Wellness.

Click here for QRO’s review of Sleater-Kinney at Paradiso in Amsterdam, Netherlands on March 19th, 2015

Sleater-Kinney had used angular rock since well before its present critical (or at least critic’s) popularity, with just the right level to make them stand out & cut deep, without being all angles, no interior. S-K are the same with their justified anger, a wry amount that isn’t post-modern nothing-matters irony, but also not preaching. Wellness pieces such as “Worry With You”, “Method”, and the title track showcase it all powerfully, but perhaps the best is “Complex Female Characters”, which is a takedown of supposed pushes for said archetypes that are actually unfulfilled and even contradictory. There are also pleas, such as in “Method” and the evocative lost call closer “Bring Mercy”, and more straight-up rock with “High In the Grass”.

After drummer Janet Weiss left Sleater-Kinney following the release of 2019’s The Center Won’t Hold (QRO review), there was a question where Carrie Brownstein & Corin Tucker would go. Path of Wellness shows that they ain’t goin’ nowhere, still hitting the tough notes.

We Are Scientists – Q&A