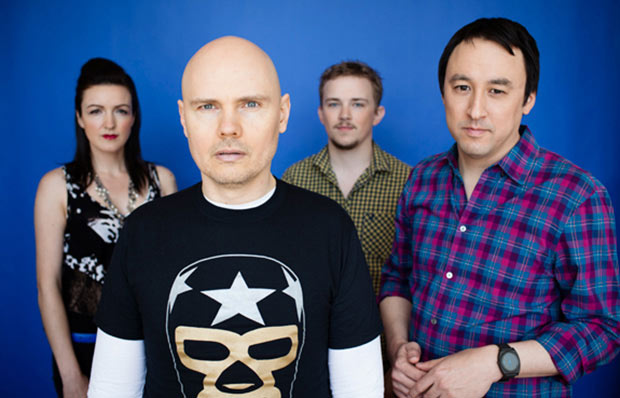 Earned or unearned, Billy Corgan has quite a reputation in alternative music – for good & bad.  As the frontman & singer/guitarist of Smashing Pumpkins, he was one of the biggest figures in the explosion of alternative rock in the nineties, producing two of the era’s biggest and best records, 1993 breakthrough Siamese Dream and 1995 follow-up double-album & #1 debut on the charts Mellon Collie and the Infinite Sadness.  He’s also considered one of the genre’s most frustrating ‘artistes’, from his control freak tendencies to prickly personality – not to mention his tempestuous relationship with the even more notorious and divisive Courtney Love.  The Pumpkins went from the high of appearing in The Simpsons‘ classic ‘Homerpalooza’ episode to kicking out drummer Jimmy Chamberlin over drug use (after his overdose with touring keyboardist Jonathan Melvoin in 1996 – Melvoin did not survive), just in 1996.  The Pumpkins’ later years, Corgan’s post-Pumpkins act (with Chamberlin) Zwan, solo material, Pumpkins reunion (with only Chamberlin & new members), and even Chamberlin’s recent departure before latest album, Oceania, all seemed to point to an artist past his prime.

But even if it’ll never be 1993 again, Corgan & his Pumpkins managed to wow an intimate crowd at New York’s iHeartRadio Theater on Tuesday, June 19th in a special show for iHeartRadio.  The show was open only to VIPs & ticket winners, and there were many entries (QRO contest), though VIP no longer has open bar (perhaps because iHeartRadio owners ClearChannel are reaping the financial difficulties of their leveraged buyout just before the 2008 crash, as detailed in the same week’s issue of The Economist – at least the super-nice bartender still has a job).

June 19th was already special for the Smashing Pumpkins, as it was the release date of Oceania – but this was not just a set of new material, as one might have feared an artiste like Corgan would have done.  But it also wasn’t just the ‘old hits’, as you might have thought he would be forced into.  Instead, the Pumpkins opened with a cover of KISS’ "Black Diamonds".  Now, covers are nothing unusual at iHeartRadio Theater, as the website often asks an act to perform a cover they’ve never done live before, so as to have some exclusive new material for the website.  And "Black Diamonds" is a great song to cover – iconic enough that everyone knows it (and there was lots of singing along in the crowd that had not expected the cover), but not so overplayed that no one needs to cover it.  There’s a reason The Replacements covered it on their iconic-in-its-own-right Let It Be (QRO deluxe edition review).  But what was surprising was that new drummer Mike Byrne sang the verse, not Corgan (who did join in on the chorus, as well as singing the well-known opening lyrics) – but it was originally sung by KISS drummer Peter Criss, and even live by his replacements Eric Carr & Eric Singer, so guess it’s just one of those rare drummer/singer songs.

Still, Smashing Pumpkins did play the hits.  Mellon Collie came up next with singles "Zero" and "Bullet With Butterfly Wings", hard-hitting tracks that still strike hard today.  And yes, the crowd went crazy with the first notes on Corgan’s guitar to "Today", their breakthrough single from breakthrough Dream, and still the song the Smashing Pumpkins are most associated with.  There’s nothing quite like hearing a song you’ve loved for almost twenty years in such a small space as iHeartRadio Theater (QRO venue review) – cavernous Terminal 5 (QRO venue review), it is not (QRO live review of Pumpkins at T5).

And still, the was the release date for Oceania, so Smashing Pumpkins played off of it, doing the first three tracks, "Quasar", "Panopticon", and "The Celestials".  It could have already been said that the band ‘earned the right’ to play new songs, but the new songs actually held up pretty well, even in such storied company.  They particularly gave guitarist Jeff Schroeder a chance to shred, something he does a lot on Oceania.

Schroeder also had a chance to shred after the Oceania three-peat with the second cover of the night, David Bowie’s "Space Oddity".  Unlike their rendition of "Black Diamonds", the Pumpkins didn’t stick to someone else’s script, instead converting the glam-space expanse of the original into the other side of seventies rock, wailing on the axe.  And unlike "Diamonds", their version didn’t hold up as well – but would any version of the ultra-iconic piece?  There are some great songs that work great as covers, like "Black Diamonds", and some amazing songs that just don’t need to be covered, like "Space Oddity".

The Pumpkins left the stage after "Space", and it would have been an odd note to leave on, but they returned for an encore – and it was of Siamese‘s great single "Cherub Rock".  The fans went crazy from that song’s own singular drum intro, but Corgan & his Pumpkins added the hard-hitting, if slightly confusing, "X.Y.U." from Mellon Collie, which wasn’t on the set list, to close out the show.

While Billy Corgan will never be the most talkative of frontman on stage, he did seem in good spirits.  He joked that he loves New York, "But not New Yorkers…" before adding (after getting joke-booed by the crowd), "I’m only joshing ya…"  He also seemed to forget the name of his own new album, taking a fan’s suggestion to just called it "Awesome".  And when he guitar wasn’t in tune, he added that he should have some banter to fill up the tuning breaks, before prematurely ending his tuning by just saying, "We’ll see how this works…"

The ‘charter’ Smashing Pumpkins of Corgan, Chamberlin, guitarist James Iha, and bassist D’arcy Wretzky will probably never reunite (though that had been said about Pixies, Pavement, and many more great alt-acts of the eighties & nineties…), just as it will never be the halcyon days of alternative rock that there were in the early nineties.  But Corgan has kept on going with his own Pumpkins (who even still, as always, have an attractive female bassist in Nicole Fiorentino – hell, even Zwan had one – though she isn’t the girl from the Siamese Dream cover as was rumored/the Pumpkins had once joked…).  And diehard fans that won tickets to the VIP/contest winners-only show got to see them in an extremely intimate venue.