Snowden – No One In Control

Not only is Snowden still here, not only are they still great, but that they’re still growing.... 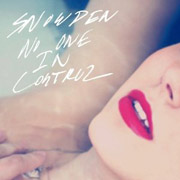 In 2006, Atlanta’s Snowden followed up their great self-titled debut EP with the amazing Anti-Anti debut full-length, touring with the likes of Arcade Fire and Kings of Leon, later doing a live DVD from New York’s Bowery Ballroom (QRO venue review).  But then they went into making their follow-up right when the ground started to really shift under the label system.  Some self-released digital EPs followed, the group moved to Brooklyn, and we waited.  The group moved a few more times (currently in Austin), to the point where only singer/guitarist Jordan Jeffares remains from the original line-up, but we still waited for that second album.  And waited.  And waited.

Well, No One In Control is finally here, and it sees Snowden update their powerful original sound into today’s more atmospheric alt-sounding times.

The alt-rock that was on Anti-Anti fit well in the time of alt-Brit-rock and the Canadian Invasion of the middle of the last decade, but these days the kids have traded their guitars in for keyboards, and if you’re not doing lo-fi party-garage, you’re doing bedroom chillwave (or, god forbid, dubstep…).  No One In Control’s initial single “The Beat Comes” (QRO review) seemed to indicate that Snowden hadn’t changed with the times – not that there was anything wrong with that, as the single has the incisive rhythm & guitars married to Jeffares’ evocative vocals that you remembered & loved.  However, the rest of the record goes for a slower and even darker tone (maybe reflective of Jeffares’ mood about how long it took to get it released…).  The opener/title track sets the tone nicely, of shadowed loss, while the following “So Red” introduces more of a wash.

There are moments of energy beyond “The Beat Comes”, such as how the ominous “Hiss” moves into activity.  There are also lighter moments, at least relatively speaking, like their airier “Anemone Arms” and the more acceptingly wistful “Don’t Really Know Me”.  But then No One gets very sad in its last third, even as it strips down to mostly just Jeffares’ voice and background effects on such numbers as “Not Good Enough” and “No Words No More”.

It has been a long, long wait for the new Snowden record (Jeffares talked about making it to QRO – in 2008…), but thankfully big-name friends Kings of Leon have picked the band up for their new label (just like they did for another should-be-bigger tourmate hailing from the alt-South, The Features – QRO photos of Kings of Leon on bill with both).  It’s not the ‘Anti-Anti 2.0’ that one might have been wanting at one point, but proof that not only is Snowden still here, not only are they still great, but that they’re still growing.