New singer songwriter folk acts are a dime a dozen, somewhat unfortunately, but the Swedish Sofia Talvik is a field away from most.... 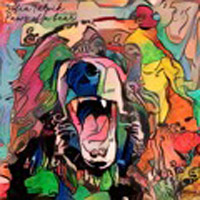 New singer songwriter folk acts are a dime a dozen, somewhat unfortunately, but the Swedish Sofia Talvik is a field away from most. While there is some ordinary guitar and some of the eerie harmonies typical in post-’80s folk, even some cheesy country elements, there is also a length of relaxed postmodernism in Paws of a Bear.

Yes, the philosophical ‘what is the world’ type of thinking is here. The opener, for instance, “Take Me Home”, is somewhat haunting, the strings and voice of Talvik are especially big and world weary, but it is a little too typical country.

Even so, some songs like “Reflections”, “Blood Moon”, or “Pharaohs and Friends” are bold, enrapturing, and a sky of longing. Other artists have done thusly; “From Clare to Here” by Ralph Mctell comes to mind. However, the better numbers such as “California Snow” and “Siren Song” are enviable as folk songs or more modern alternative ballads.

The title song for example, wails, “Chained to the circus or chained to the road / It’s the same damn chains” a little more like Silverchair, The Breeders, or Dinosaur Jr might. These songs rise above the more typical, but acceptable, bitter “I Liked You Better” or the ender, “Die Alone”. Some tracks, such as “Wrapped in Paper” or “California Snow” even reflect a fluffy, almost rock, think Verbena or Silverchair again in the piano and guitar, just to demonstrate the variety, the tone stretches from Mctell all the way to Journey. In the mainstream indie folk world, Talvik makes her eighth studio album count. Paws of a Bear lets her stand out a little more as the darker version of a modern folk universe in real need of some alternative.