<img src="http://www.qromag.com/wp-content/uploads/2012/03/softswellssoftswells.jpg" alt="Soft Swells : Soft Swells" /><br /> Although <i>Soft Swells</i> is not overly euphoric, it's a pleasant meander through the sunny California no matter where you listen... 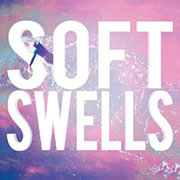 Although Soft Swells’ eponymous album is not overly euphoric, it’s a pleasant meander through the sunny California no matter where you listen to it.  The musical duo of Tim Williams and Matt Welsh managed to make a record where every song evokes a stream of mental images redeeming the listener from the grim reality.

With strong dose of optimism oozing from the opener, "Every Little Thing", Williams sings, "Every little thing’s going to be alright / Every little wound’s going to heal up tight."  From there, things can only get better.  Each song leaves haunting echoes and generates an engaging sense of wonder through the almost vintage sound.

Despite the seemingly wistful lyrics (from first love heartaches in "Overrated", through loneliness theme in "Say It Like You Mean It", to drawing conclusions from life lessons in "Lifeboats") Soft Swells is a mood-lifting album. With the summer breeze blowing through the music it’s only a matter of time before you immerse yourself into the world of your own memories of summertime carelessness and youthful naivety.

Somewhere among the melodic sunshine, the album embraces the idea of control, decision-making, and its effects in a cheerful spirit.  It also manages to make the overrated electronics, simple handclaps and a ringing xylophone sound cool and refreshing.  Swampy guitar and drums indicate it’s an indie-rock compilation, yet it’s the pop undertones that define it.  Being only 32 minutes long with a lack of pivotal tune the end of the set comes almost suddenly.  Well, time flies by when you enjoy yourself.

Recorded in a little over a week in a rainy England, Soft Swells pays homage to always-cloudless California not only with its sound but also with the title.  Although Williams and Welsh made it look easy, it is quite an achievement to make such mellifluous and coherent record in such a short time.  Now the big question arises whether their next album will match this one?  Only time will tell.