A sadder Son Volt comes to port on their latest, 'American Central Dust'. ... 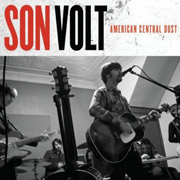 With the recent explosion in new alt-country bands, what’s a veteran like Jay Farrar & Son Volt supposed to do?  He & Jeff Tweedy practically founded the alt-country genre in their work in Uncle Tupelo, before going their separate ways, Farrar on to Son Volt, Tweedy on to Wilco (QRO live review).  Farrar didn’t enjoy the major success that Tweedy did, but earned critical plaudits in the late nineties before being dropped by Warner Bros.  A whole new band formed behind him when Son Volt returned in 2005, and American Central Dust is their third post-hiatus record.  But in this new, alt-country-saturated market, Farrar has gone even more country, more downbeat, more twang.

Whereas the last Son Volt record, 2007’s The Search (QRO review), saw a brighter, more rockin’ Farrar, American Central Dust, like it’s name implies, is sad even when it’s happy, like in the uplifting “No Turning Back”, which still quotes folk icon Leadbelly, “‘No need for the bourgeois towns’”.  But most of ACD is twang-sad, like “Roll On”, “Cocaine and Ashes”, and “Sultana”, Farrar’s recounting of the worst American maritime disaster ever, the explosion & sinking of The Sultana in 1865 near Memphis, “The Titanic of the Mississippi”.  That old-timey style also pervades ACD, not just on “Sultana” but also opener “Dynamite”, industry-ode “When the Wheels Don’t Move”, and “Pushed Too Far”.

American Central Dust can get too countrified at times, and some of the later pieces are a touch forgettable.  But even in this day & age of over-alt-country, Son Volt keeps the home fires burning.