<img src="http://www.qromag.com/wp-content/uploads/2011/07/sondrelerchejun26.jpg" alt="Sondre Lerche : Live" />Sondre Lerche entered the modest Doug Fir stage as if the microphone was drawing him in by an invisible force - like...

Even at one of Portland’s hippest joints, the Sunday night of June 26th permeated mellowness.  But a single man would soon obliterate the placidity with a guitar. 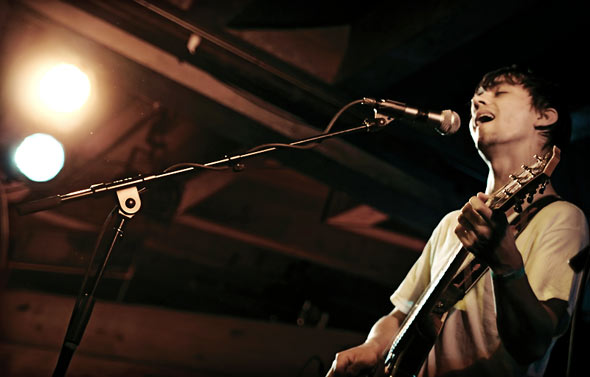 Sondre Lerche entered the modest Doug Fir stage as if the microphone was drawing him in by an invisible force – like a magnet.  Without saying a word to the audience, the boyish musician began his first song, and the crowd went wild.  After the warm-up, the lights dimmed, and Lerche’s opening acts (NightLands and Kishi Bashi), whom he had handpicked for the tour, joined him on stage, as did another fellow Norwegian, Dave Heilman.  For the next half of the set, the elfish Scandinavian and his impromptu back up band jammed out like no other, giving vibrancy to his suave recordings.  "Domino", a favorite off his new self-titled album (QRO review), filled up the intimate venue, and the audience eagerly bobbed, nodded, and swayed along.  "Classics" like the title track from Lerche’s 2009 LP, Heartbeat Radio and "Two Way Monologue", set a shock wave through everyone as the dance floor became limber, and the nimble performer bounced around with his acoustic guitar – head oscillating, dripping with sweat.

With his offbeat sense of humor, which was often the result of Lerche’s free interpretation of the English language, the 28-year old charmed the concertgoers and tickled his bandmates.  The melodic indie pop singer/songwriter amused his fans by making jokes about not having or needing a set list due to Portland’s free-spirited nature.  Even tangled cables around his microphone stand and effects pedals were an opportunity for a comedy.  Demonstrating his chivalry, Lerche also took ample time to promote his fellow musicians by suggesting items at the merchandise table to the enchanted crowd.  The endearing crooner evoked intimacy with his audience – as if he were singing only for you, making every girl swoon while putting a smirk on each guy in the room.  Though the small venue was little more than half full, the petite Norwegian provided energy and commitment to his craft fit for a stadium. 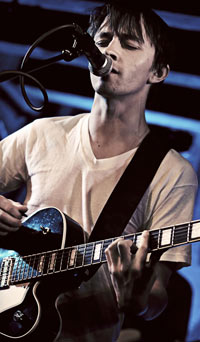 Click here for photos of Sondre Lerche at The Culture Room in Ft. Lauderdale, FL on November 17th, 2011 in the QRO Concert Photo Gallery

Click here for photos of Sondre Lerche at The Social in Orlando, FL on February 9th, 2010 in the QRO Concert Photo Gallery

Lerche closed his set with the popular duet, "Modern Nature", and the enthusiastic audience sang along to the female portions of the song.  The Brooklyn resident is quite the sight to see live – his pristine recordings come to life in more profound ways in concert.  All in all, Lerche provided a well-balanced set for his fans, playing favorites off of his older album, Heartbeat Radio, while proving that he’s not going anywhere anytime soon with new favorites off his most recent self titled album.  You would be doing yourself a favor by heading out to see Lerche and experience the ‘born for stardom’ musician.

TV On the Radio : Nine Types of Light