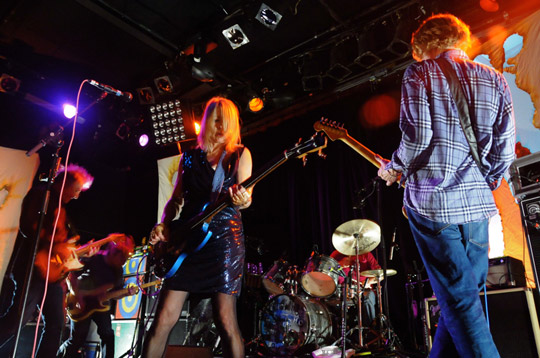 Click here for photos from Night One, November 24th, in the QRO Concert Photo Gallery

Big, established musicians like to change things up and occasionally play smaller places.  It brings them closer to the fans, after the distance created by larger venues.  It reconnects them with their earlier days, when they played such sized places.  It means that the musicians have to rely less on spectacle, since the crowd isn’t so far away (and the smaller places are less suited/able to do light shows & the like).  After making their money, touring the big venues, they can charge what they like at the odd small show.  And it brings in the ‘real fans’ – those who’d pay the big bucks and/or get their tickets as soon as they’re on sale.  Sonic Youth is certainly a big, established band, so their two dates, Tuesday & Wednesday before Thanksgiving at Brooklyn’s Music Hall in Williamsburg, were the punk icons playing back-to-back intimate shows. 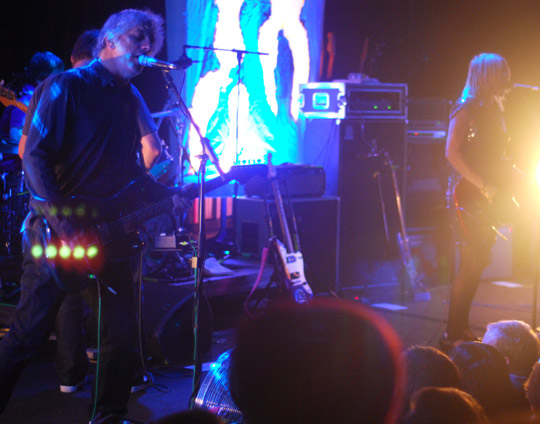 Not that Music Hall in Williamsburg (QRO venue review) is a ‘small’ place – it includes a balcony, and its capacity is roughly 550 people.  Sonic Youth isn’t unfamiliar with the place, having headlined Day 2 of the three-day No Fun Fest there earlier this year (QRO Festival Guide).  And it was only a few years ago that they played Webster Hall (QRO live review) – a stage (QRO venue review) that’s not that much larger than Music Hall (especially since the balcony at Webster is VIP-only, reducing the overall capacity). 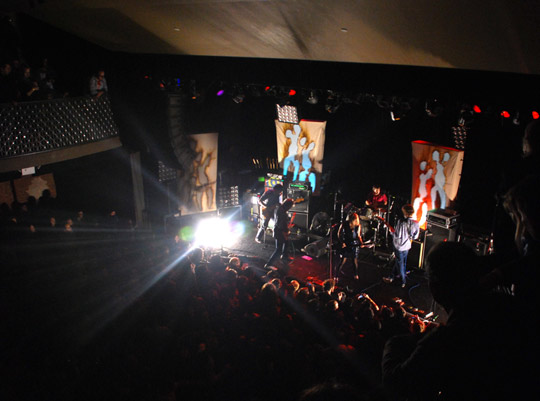 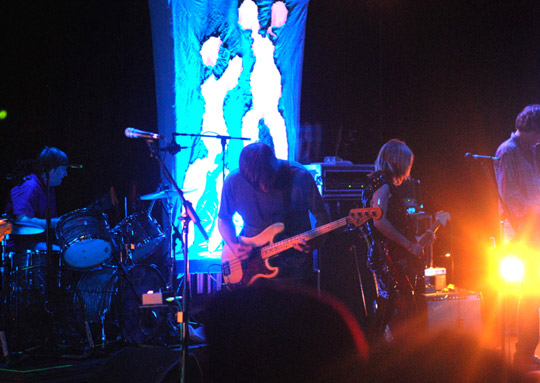 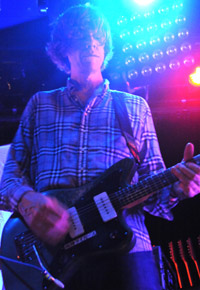 There was one respect in which this show wasn’t different: the set list (QRO photo).  Like the United Palace show this summer, both nights at Music Hall were dominated by Sonic Youth’s latest, The Eternal (QRO review): eleven out of seventeen songs on either night were from The Eternal, and the only Eternal song not played was “Thunderclap For Bobby Pyn” (not played either night, or in Harlem in July).  And also like the United Palace show, all of the non-Eternal choices were at least two decades old, though a little more recent: while the summer uptown show had featured nothing else more recent than 1987’s Sister, the two fall nights in Brooklyn were mostly Sister and the following Daydream Nation (QRO re-release review) – though still nothing outside of The Eternal later than 1988.  Unsurprisingly, The Eternal line-up was near exactly the same between the two nights, and though no non-Eternal song was played on both nights, the slots for such songs were in near identical locations on the set lists (mostly near the end).

[songs from The Eternal unless otherwise noted] 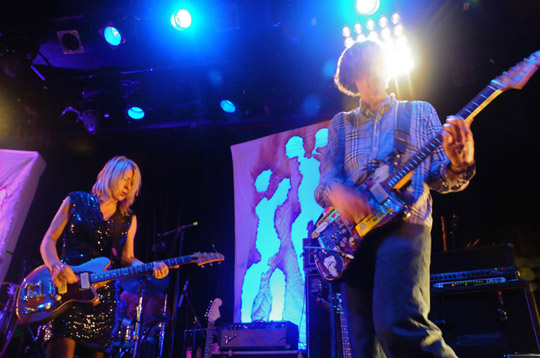 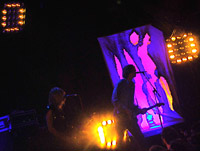 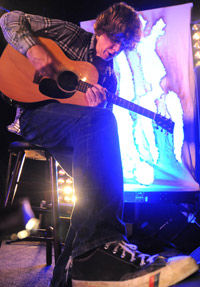 The Eternal high & lows were similar both nights in Brooklyn, as well: Eternal single & stand out “No Way” early on, “Anti-Orgasm”/”Poison Arrow” duo mid-set, and late-set “Antenna” all stood strong, with the last two particularly improving from on record (but it was “Orgasm” that got each letter lit up on stage…).  The main-set closer both nights, “Massage the History”, was the (relative) weakest point both nights (as it was at United Palace), with singer/guitarist Thurston Moore sitting on a high chair while singer/guitarist (and wife) Kim Gordon lead Sonic Youth in slowing things down (as it led into the first encore break, “Massage” was pretty much the perfect time to go get a drink – the only person who should be sitting at any point in a Sonic Youth show is drummer Steve Shelley…)  “What We Know”, the only Eternal song in either encore on both nights (indeed, the first song of the second encore return both times), thankfully didn’t wilt when amidst older material, but instead was perhaps the song most raised from recording (whether an Eternal track or not) on either night.

Sonic Youth playing “What We Know” live @ Music Hall in Williamsburg in Brooklyn, NY on Night One, November 24th, 2009: 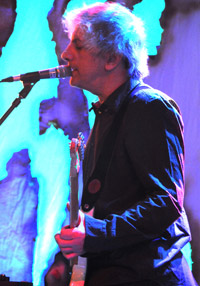 On both nights, singer/guitarist Lee Renaldo got his first mike exposure on the fourth song of the night, which was also the first non-Eternal song (in fact, both from Daydream Nation).  Of the three singer/guitarists in Sonic Youth, Renaldo’s always been better known & acclaimed for his guitar work than his vocals, but that’s really because the bars are so high: Gordon & Moore, the ‘first couple’ of alt-rock, are two of the most recognizable and effective frontpeople out there, while Renaldo is one of the greatest guitarists in alt-rock, if not the outright greatest (J. Mascis, of the almost-as-seminal Dinosaur Jr – QRO live review – who opened for Sonic Youth at Terminal 5 on Saturday, pretty much the only band Dinosaur Jr should ever open for – might beg to differ…).  Renaldo was given a leg up on his fellow singer/guitarists, by doing classic tracks from the ultra-classic Daydream, “Hey Joni” & “Eric’s Trip”, but he’s still a little less of a showman, a little more of the close-to-the-vest ‘artiste’, than Gordon or Moore.  Meanwhile, the later Sister tracks were both a bit overshadowed by the following “Antenna”. 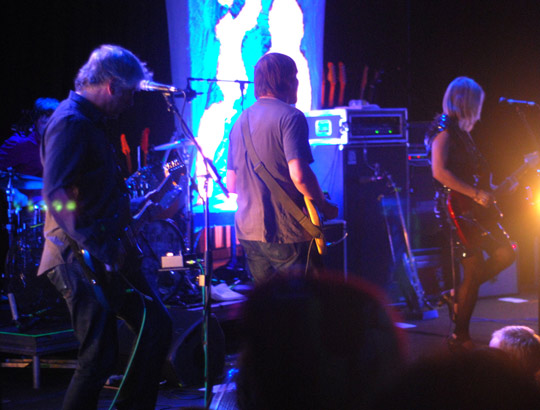 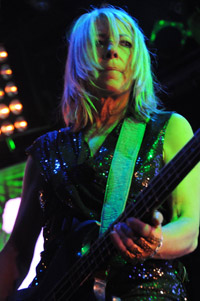 It was really only in the encores that the nights significantly differed (though Wednesday night’s encore break came one song later, as Sister‘s “White Cross” slid between “Leaky Lifeboat (For Gregory Corso)” and “Massage” that evening).  Tuesday night went a bit older, a bit more experimental, a bit slower in the first encore break, with “Tom Violence” (from 1986’s EVOL) and Sister‘s “Schizophrenia”, while Wednesday slightly more recent, certainly more crowd-pleasing, in Daydream‘s “The Sprawl” & “Cross the Breeze”.  After the second encore returns of “What We Know”, Sonic Youth on Tuesday night kept it slower & older with EVOL‘s “Shadow of a Doubt”, but both shows ended on fan-appreciated, rip-roaring classics: Daydream‘s iconic “Silver Rocket” on Tuesday, and always-appreciated “Death Valley ‘69” (from 1985’s Bad Moon Rising – and the United Palace show in July) on Wednesday.

See also them playing “Shadow of a Doubt” on Night One. 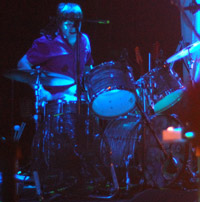 The first night having older, slower non-Eternal songs, compared with the second, was rather fitting, as the audience was certainly older & slower the first night than the second.  Such a long-lived (going on thirty years!…), universally-respected band, who play ‘young people’s music’, naturally has a wide age span in fans (they’re approaching the ‘go to the show with your dad’ range…), from young alt-punks to veterans of the eighties punk scenes, and in between, those who discovered them in the early nineties with Nirvana (‘When Punk Broke’ – the name of the tour documentary of when the two acts toured together).  Playing at Music Hall only heightened the range, as it drew the kids who snapped up early any chance to rock out so close to their idols, and adults who’d prefer to see this band from their past as they’d seen them in their past (& not at some giant, impersonal place), and could afford the Craigslist mark-ups. 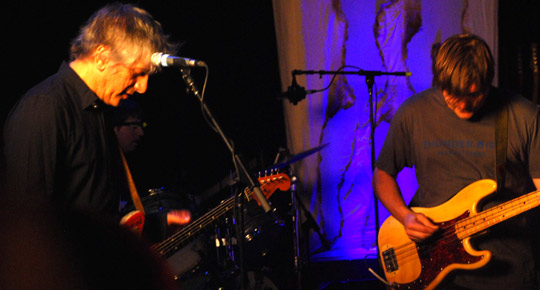 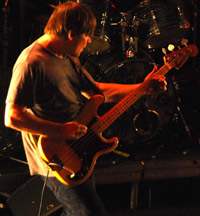 But playing the two nights before Thanksgiving pushed one crowd to one night, and the other to the other.  While the kids mostly had school on the day before Thanksgiving, adults had half-days at work, if they had work at all; meanwhile, the adults had to travel on the (not actually the) busiest traveling day of the year and prep for the holiday, while the kids were already at home and were starting their vacation on the holiday.  Thus, while the Tuesday evening crowd was weighted towards the adults who’d have to travel & prep only late the next day, Wednesday evening was tilted towards the kids who’d had to go to school that day, but were very free that night.  This made the Tuesday night crowd more reticent, Wednesday nights’ wilder. 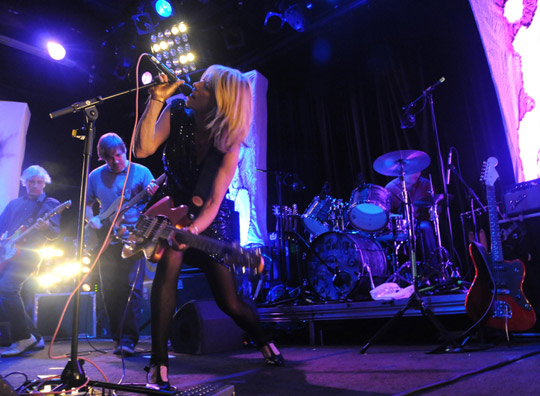 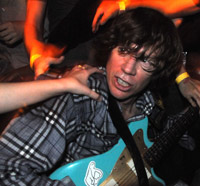 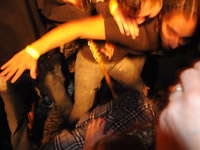 Of course, Sonic Youth fans aren’t exactly ‘reticent’ by nature, so the Tuesday crowd was only restrained in comparison to other Sonic Youth crowds, though the packed Music Hall maybe made it feel a little more smothering on Tuesday.  But the kids going crazy on the packed stage floor on Wednesday night brought a mosh-pit

pretty much from start to finish, with more in the 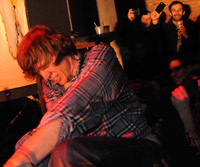 crowd seemingly annoyed by being crashed into, than enjoying doing the crashing.  Moore enjoyed it, jumping into the pit more than once, even sing/shouting from there, “Don’t mess with the Brooklyn boys…”  However, he later did have to single 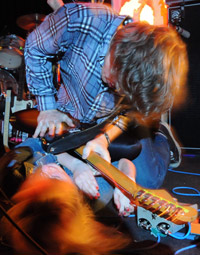 out a specific troublemaker (or someone/thing) to his roadie & security (who had to protect Moore when he fell amidst the crowd – with guitar, of course…), and at one point, Gordon mock admonished, “Don’t be mean…”  Still, Sonic Youth were definitely more active on the second night, from Moore diving into the crowd to pulling opener Jemina Pearl (QRO photos) out of it – the best being Gordon inviting everyone over for Thanksgiving at new bassist Mark Ibold’s place in Queens, “Pavement will be there…” (Ibold’s previous, almost-as-iconic band – QRO album review – that is getting back together next year). 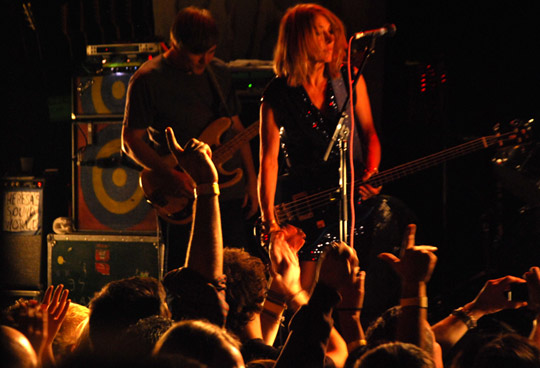 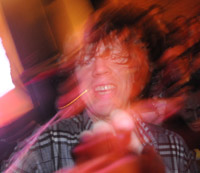 In a perfect world, Sonic Youth would play all of your favorites, from their entire discography (there was no Dirty, for those of us in between the kids & adults, for whom, “It’s our Daydream Nation…”).  And you wouldn’t be either on tiptoes, trying to get a peak from behind rows and rows of people from afar (relatively speaking), or wedged amid rioting kids on the stage floor.   But in that perfect world you would be getting to see a band of Sonic Youth’s size, the kind who gets their show reviewed in The New York Times, up-close & personal, more than once, like seeing them back-to-back at Music Hall in Williamsburg. 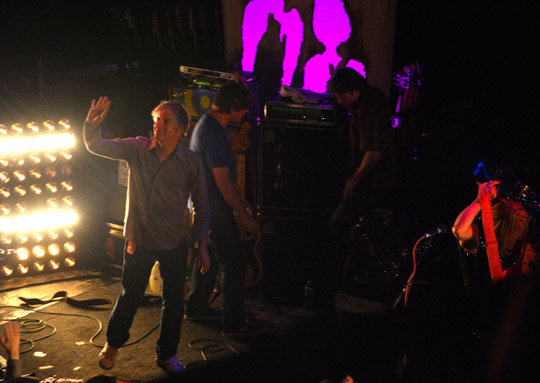