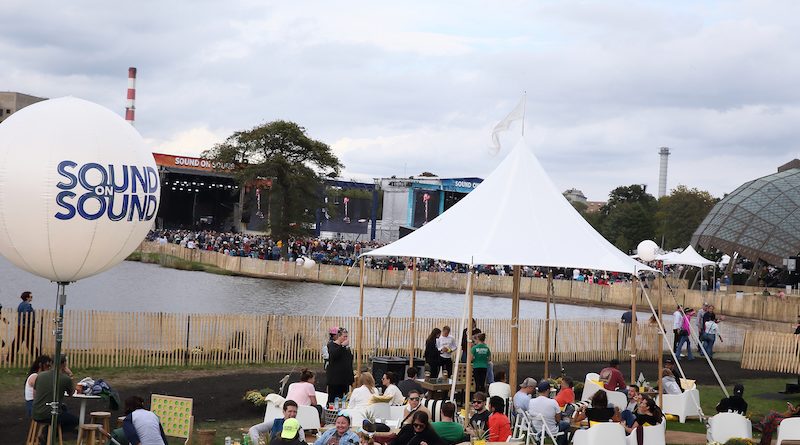 Click here for photos of festival sights from 2022 Sound on Sound Festival in Bridgeport, CT in the QRO Concert Photo Gallery

Admittedly, first mention has to be made of the teething issues on the first day. Most notable was the proliferation of lawn chairs (which one even could rent at the festival) and blankets in the field in front of the two stages. This made it difficult to find a place to stand (unless you paid extra for the up-front VIP Viewing Area), and even worse was to try to get through the crowd, an obstacle course of avoiding legs coming out of chairs and blankets sprawled out upon the ground. And the crowd itself sprawled out even further, thanks to the extra space taken up.

Meanwhile, there were serious line issues, for food and in particular drinks. Lines are nothing new at a festival, but these would stretch the length of the festival – running right up into those lawn chairs.

Early on the first day, there were some sweet & charming alt-country in the likes of Trampled by Turtles, Jenny Lewis, and Band of Horses, all of which were very fitting for this festival and at that time of day. The acts also all had moments rocking enough to get one out of your lawn chair or off your blanket. That continued with the more old soul rocking Revivalists and alt-folk/pop of CAAMP, both of whom appeal to a wide range of fans, something very useful at a two-stage, no overlap festival like Sound on Sound.

However, as the day wore on, some issues became more & more apparent. This was most clear with Zach Bryan’s set, where he twice left the stage seemingly due to sound issues, and only played something like three songs. The Lumineers did give it their all with their alt-country, if the band’s specific stage set-up caused some issues [like last minute not allowing photographers to shoot].

By the time the sun started to set for Father John Misty, fans did at least know what was what. And while the falling sun might have been beautiful for Father John’s beautiful music, by the time it was dark for headliner Stevie Nicks, you pretty much had to stand for the leader of the acclaimed Fleetwood Mac.

Thankfully & commendably, Sound on Sound really stepped up its game for Day Two, listening to the complaints. Most clearly notable was the ‘NO CHAIR ZONE’ established in front of the two stages, which made the main crowd area only for standers (and did have the neat effect of seeing chairs & blankets running right up to the straight lines). There were also laid out walking areas, two rock paths & one basically spray painted into the grass (but still observed).

Oh, and the festival got more servers, both for the bars & for food. Lines were reduced to reasonable levels, and just in general everything was much easier.

Admittedly, there seemed to be fewer people than on Day One, perhaps due to the prior day’s issues, or perhaps because the threat of every festival’s biggest issue – rain – hung over Day Two. Whatever the case, it helped ease things on the field and on the lines.

There are some acts that you might never pay to go see, but if they’re playing a festival, you definitely want to check out, like the Spin Doctors. “Two Princes” is so nineties that literally that same Sunday night, it was used not once, not twice, but thrice on the season premiere of Family Guy to indicate the era of the Oscar winning films they were spoofing. Of course, the Spin Doctors closed with it, and also played “Little Miss Can’t Be Wrong” & “Pocket Full of Kryptonite”, but also some new material.

After that, Sound on Sound returned to its sweet alt-country ways with Noah Kahan and The Head and The Heart. Unfortunately, it started to rain just as The Roots began, but “the best band in late night” are kind of the right band to get people out when it rains. They’re particularly active on stage, and not just famed singer Black Thought and drummer/Oscar-winning filmmaker ?uestlove, but in particular tuba player Damon “Tuba Gooding Jr.” Bryson, busting moves while carrying the big instrument.

It was also a good transition into Gary Clark Jr.’s smooth and easy blues, which even leaned into jazz – and no more rain (which never fell that hard when it did). Brandi Carlile has seen her country star seriously rise over the last few years, and one could see why at her Sound on Sound set, including with her strong backing band.

It was the last show of the first post-COVID tour of The National. The Cincinnati-by-way-of-Brooklyn act had just played nearby Port Chester two nights earlier (QRO live review), and like at that show the alt-rock stars mixed in some new songs with their by-now-classics. They did everything from “I Need My Girl” – dedicated to singer Matt Berninger’s young daughter, who was finally at show of theirs – to the new “Eucalyptus Daylight”, played for only the second time (the first was in Port Chester, the day after it had been written, where it was called “Moon Drop Light”). The smoke machine & purple lights created great swirling clouds with the wind, but that wind brought about a weather warning, so Berninger dived into the crowd earlier on [and not by your correspondent, like he did on Friday night].

While Dave Matthews has long had his die-hards, Sound on Sound was also a great chance for more casual fans to catch him, playing with just his longtime guitarist Tim Reynolds. So, it wasn’t the huge show that would “Crash” into you, but still special, if shortened by that threatening weather.

While there were obviously issues with the set-up of the first-ever Sound on Sound, it is to the festival’s credit that so many were fixed mid-festival. Okay, New Yorkers probably complained about the two hour journey to Bridgeport, and either parking or the long walk to/from public transportation, but that’s what you get when you leave Manhattan.

And Sound on Sound really nailed it with the artists, managing to have both wide and deep appeal, both artists with die-hard fans and those you’d always kind of wanted to see. Finally, a reason to go to Connecticut after Labor Day…