Note: Due to consistent noise complaints from neighbors, Sound Fix Records’ back bar/café/free venue closed on February 28th, 2009.  In June, the record store itself moved around the corner to Berry & North 11th Street, reopening there in September.

Sound Fix Records is located on 110 Bedford Avenue, Brooklyn, at the corner of Bedford and North 11th Street.  The record store faces onto Bedford Avenue, but the actual venue is behind the record store, with its door on North 11th Street (though the two are connected inside).  It lies in the Williamsburg area of Brooklyn, five blocks north of Music Hall in Williamsburg, and to the west of McCarren Park Pool.

The stage, barely a foot off the ground, is situated at the far end of the back room, away from the house-right side-door entrance and house-left record store passageway (where bathrooms are located).  To the house-left of the stage floor is the bar, a rather long and large one for the space.  To the house-right are benches and tables, with further benches at the back end.  The whole place looks more like a ‘funky Williamsburg coffee shop’ than a bar and venue.

The shows at Sound Fix Records are free, with the turnout dependent upon day/time and the popularity of the band.  Some shows are merely short, ‘in-store’ events during the day for bands playing in New York that night – others are larger ‘record release’ parties.  There are also readings from local authors, sometimes accompanied or interspersed with music, like Paul G. Maziar’s What It Is.  The low stage and rather limited area between the benches and bar can make the stage floor a tight fit on high-draw nights, with visibility potentially limited.  While bands can play electric, they often tend more towards the acoustic-y, or at least turn down their volume somewhat.  Some acts refrain from bringing their entire drum set on stage, but there is a standing piano already there.  The large bar luckily means a larger selection, from two-for-five dollars Pabst Blue Ribbon to the curiosity piquing ‘pickletini’.  In some ways, it resembles a Williamsburg version of the small Bowery venues like Mercury Lounge, Cake Shop, Piano’s, The Living Room and others – small space, cheap drinks, low (in this case really low) price, though even the nighttime shows usually start and end relatively earlier.  There aren’t concerts every night, like at most of the Bowery venues, but when they do play, they’re often bigger, more Mercury Lounge than Cake Shop.  Probably the most consistent place, year-round, to see for free bands that you’d actually pay to watch. 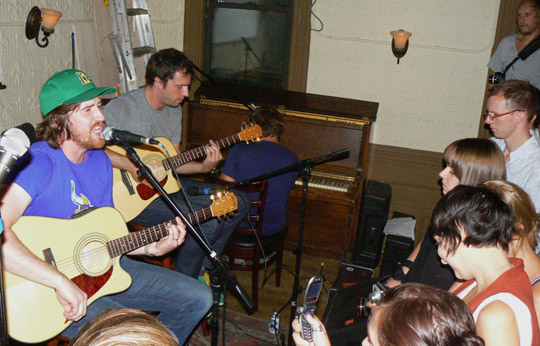