<img src="http://www.qromag.com/wp-content/uploads/2012/12/soundgardenkinganimal.jpg" alt="Soundgarden : King Animal" /><br /> Soundgarden are plainly, obviously, a powerhouse of a band, yet they seem content to tread the same stale territory once again.... 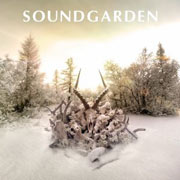 King Animal is frustrating.  Not that it’s a flaccid reunion album; the band’s in fighting shape.  And they deliver a bunch of good riffs, so it’s not disappointing on that level.  It’s just that they are plainly, obviously, a powerhouse of a band, yet they seem content to tread the same stale territory once again.  Of course, it’s their funeral, so who is QRO to say that Soundgarden shouldn’t release a by-the-numbers hard rock album in 2012?

After all, they’re good at it.  “By Crooked Steps”, Thayil’s “A Thousand Days Before”, and Cornell’s “Worse Dreams” are satisfying genre exercises, and “Bones of Birds” is a solid ballad that lets Cornell’s vocals shine.  Elsewhere, the songs (mostly written by Cornell) are lighter and more melodic than you might expect.  They’re fine, but they often don’t let the band – especially Thayil and Shepherd – do what they do best.

Click here for photos of Soundgarden from Hammerstein Ballroom in New York, NY on January 22nd, 2013 in the QRO Concert Photo Gallery

Meanwhile, Cornell, or at least his voice, seems to be suffering from megalomania.  Pointless screams and ridiculous overdubbed self-harmonies litter the album.  Actually, the production’s a little fussy across the board, and it sells the band short.  The process is often audible, most often in the form of jarring guitar overdubs.  Even Superunknown, by all means a production, sounded much more organic.

Which brings us back to the point: King Animal is mostly an inferior version of Superunknown/Upside-era Soundgarden.  And in the couple spots where they have fresh ideas, they pull their punches.

One is Shepherd’s “Non-State Actor”, a slick, sinewy song whose various sections are both seamless and distinct.  But instead of following this model to its conclusion, the band normalizes it by adding dull rhythm guitar onto the chorus and tacking a routine solo on to the end.

The other is “Rowing”, also by Shepherd.  Composed of high-register bass, guitar feedback, and sluggish drum samples, the whole thing sounds programmed, in a good way.  It’s an interesting, holistic approach that’s completely different from what Soundgarden were known for.

Of course, they can’t let a good idea be.  They toss it out halfway through the song for… yes, ‘grunge’ rhythm guitar, a ‘grunge’ solo, and Cornell’s emo-shouting.  Only Shepherd’s bass line remains, though less prominent beneath all that played-out nonsense.

It’s too bad QRO wasn’t on hand to produce: to help the band separate the wheat from the chaff, to encourage them to shed what made them famous and embrace their cool new ideas, and to ask Ben Shepherd and Kim Thayil to write a few more songs.  It’s 2012, and Soundgarden is a band of great players with songwriting talent.  They can be great if they want, but they can’t also be Rush (what is up with the jacket?).