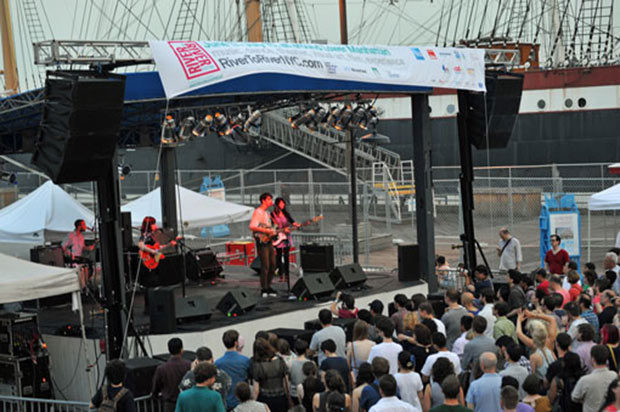 Note: After Hurricane Sandy and redevelopment, South Street Seaport has undergone changes.  The Seaport Music Festival seem to have ceased.

South Street Seaport is located on Pier 17, Manhattan, at Fulton & South Street.  It is an actual wooden pier, albeit a modern and stable one, located between the Pier 19 shopping mall (and on the other side of that, Beekman Beer Garden and the former Spiegeltent) and a collection of turn-of-the-century sailing ships; giant masts and (what was until 2013) a huge Pizzeria Uno together loom over the plaza.  It lies within the Seaport tourist area in southern Manhattan, right upon the East River.  During the summer, the annual Seaport Music Festival holds a series of concerts there, Fridays, starting at 7:00 P.M.  It was one of the downtown, riverside venues used by River-to-River Festival during the summer, along with Battery Park, Castle Clinton, World Financial Center, Rockefeller Park, and others, though in 2013 it became a separate event.  In 2011, The Village Voice, after having had its last Siren Music Festival on Coney Island the prior summer, began a new free one-day music festival, 4knots, at South Street Seaport.

The actual stage is located at the end of the pier’s wide plaza.  Being free, all-ages, and outdoors during the summer, most acts get quite a healthy turnout, and the crowd on the plaza can get quite thick.  The sound carries well, however, thanks to large speakers and side structures.  There’s a ‘photo well’ area between the crowd and the stage, cordoned off by portable metal railing barriers.  That cordoned area extends up the house-left side of the stage floor, and is open not just to press but other VIPs, friends of the bands, friends of the festival and so forth.  It creates a corridor on the other side for people using the stores and restaurants that open onto the plaza from Pier 19, but also gives the main stage floor area a bit of a ‘boxed in’ feel.  The stage is elevated only five feet or so, but the acts become more and more visible as the sun goes down (it’s usually still light out when the first band takes the stage, but dark by the time the main band does).  Beer is sold from a few kiosks, but a better deal on pitchers can be found in the bar at the top floor of the Pier 19 mall, that opens out onto the food court and overlooks South Street Seaport; one can leave, pitcher in hand, via the outside staircase, avoiding the no-alcohol rest of the mall.

Seaport Music features a diverse array of acts, but more and more come from the alternative arena, usually more towards the more ‘artistic’, yet still accessible, acts; they’ve also been doing a nice job of getting up-and-coming New York acts, either opening at Seaport right before they blow up, or headlining there right when they are blowing up.  It nicely results in bands you’ve always wanted to see, but just never have, without feeling like the free show is going to be such a draw as to make the crowd oppressive.  Not that the audiences don’t get intense: sometimes only inclement weather or security prevent a number of fans either moshing, crowd-surfing, or jumping into the well.  There are usually three bands, always at least two, and the second is invariably someone you’ve heard of that are worth checking out as well.  A great, easy way to kick off summer weekends, whether you work downtown or not (though, like pretty much everything on the southern shores of Manhattan, it’s a bit of a trek from the closest subway stop, and the area gets pretty dead late at night); just watch out – it’s dangerously easy to get used to, but when summer ends, so do the shows. 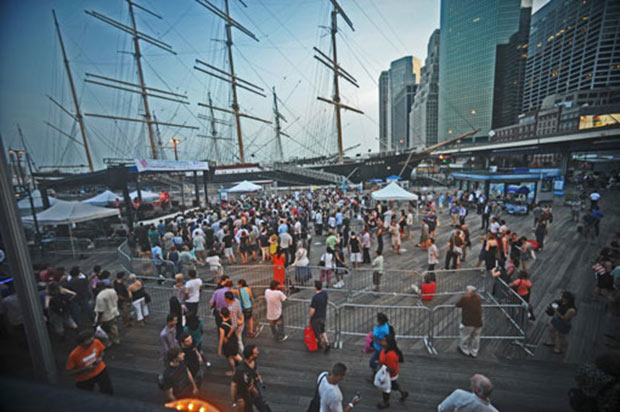