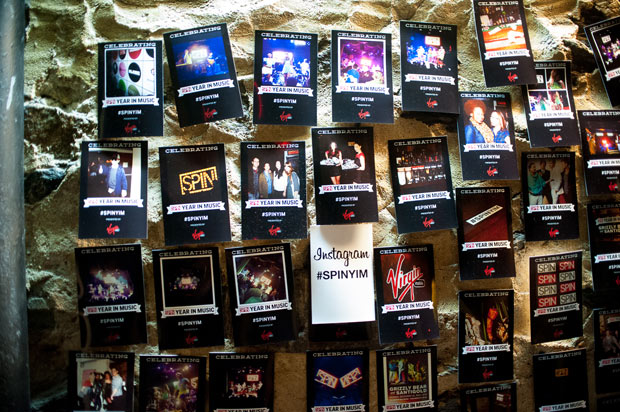 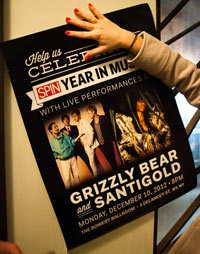 It’s been a bit of an odd year in music, with no sure-fire records of the year, no geographic sonic ‘invasions’ – even Obama’s 2012 re-election’s effects on music paled in comparison with four years ago (kind of like Obama’s own re-election).  It was a year that began with a farcical tragedy in Lana Del Rey’s (QRO album review) poorly-received, way-too-soon appearance on Saturday Night Live, and ended with a benefit for real tragedy in the 12-12-12 event at Madison Square Garden (QRO venue review), which managed to combine all of the old fogey tours of the end of 2012 (The Rolling Stones, The Who, Bruce Springsteen, Paul McCartney, Kurt-less Nirvana…).  It was a year when Radiohead headlined now-two weekends of Coachella (QRO photos), played Austin City Limits (QRO review) – and lost drum technician Scott Johnson in an on-set accident.  It was a year when Van Halen released a new album with David Lee Roth (QRO review).  It was a year of “Gangnam Style”.

But you could still count on SPIN Magazine to close the year with a flourish, celebrating 2012 with their ‘Year In Music’ party at New York’s Bowery Ballroom on Monday, December 10th with two of the artists who had a great year – Grizzly Bear & Santigold. 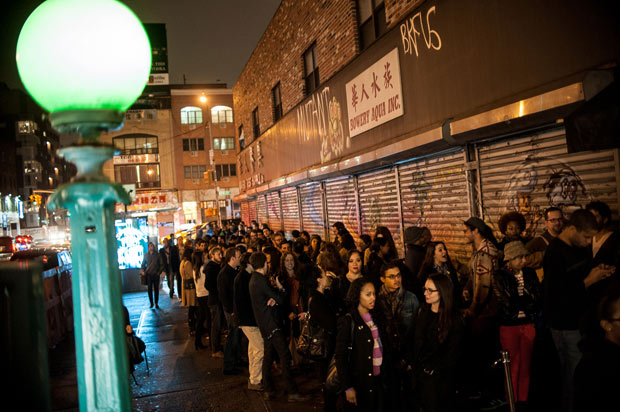 The ‘Year In Music’ party was itself a bit of an odd combination of ticket winners and SPIN staff seeing two not-similar acts, playing at a more-than-established venue (QRO venue review), but one that was smaller than the artists usually play yet not super-intimate.  However, Bowery Ballroom might have been just the right size, as any stage smaller than it wouldn’t have been able to fit all of Grizzly Bear’s equipment (seven-count ‘em-seven keyboards) or all of Santigold’s dancing (St. Gold herself, her two regular back-up dancers, and six fans brought up on stage at one point).  It also had a balcony that could be reserved for just SPIN staff – even if it meant the hoi-polloi had to watch hors d’oeuvres being carted past them (but the beer, wine & vodka was free for all – thanks Heineken, Red Diamond & Svedka!).  The division between the two wasn’t as clear outside, with interminable waits for both indistinct lines, but that’s any private party with just names on lists and overworked staff having to check their clipboards for everyone. 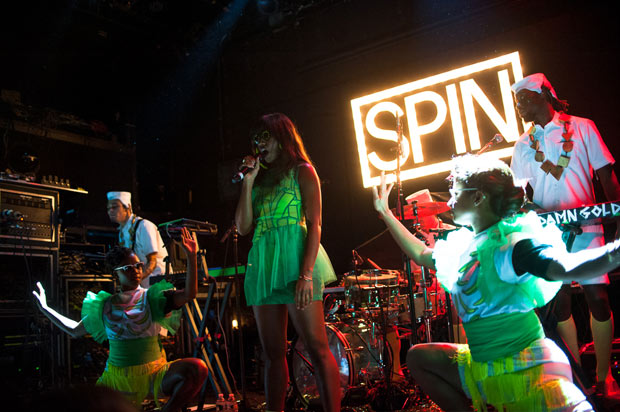 If you got on line at doors, you still got inside in time to catch Santigold start off the night.  Admittedly, she didn’t start off so amazingly, having problems with the sound in the small-for-her space – problems the crowd couldn’t hear, but Santigold kept motioning off stage to turn something up, something down.  However, she didn’t pull an ‘artiste’ and make everyone wait or start again, but plowed right through it.  Her dancers also didn’t miss a beat – though their usual ultra-stoic faces didn’t work as well in the beginning.

Yet Santigold warmed up as it went on, starting with when she invited fans on stage.  She managed to fit six on the (again, small-for-her) Bowery stage and still instructed them not to mess with her professional dancers (who didn’t flinch).  Her fan picks weren’t perfect – only one girl, and the white guy really couldn’t dance, but they did bring some energy for their one song.  In the middle of the set Santigold left the stage (as was indicated by “CHANGE” on her set list – QRO photo) for her dancers to dance – and then, who was that at the door?  A pantomime horse (QRO photo) appeared to join in on the move-bustin’, before a reinvigorated (and redressed) Santigold returned to close out her portion of the evening, with the crowd wanting more. 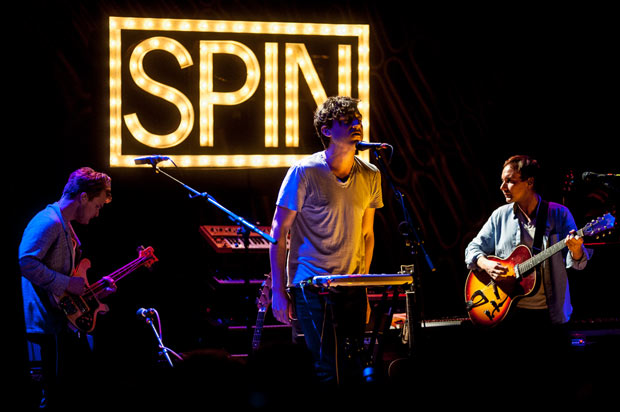 Combining the dance-hop of Santigold with the intricate alt-beauty of Grizzly Bear might seem like an odd combination, might seem that SPIN was just trying to cover as many bases as possible (which was probably also true), but the two artists have shared a stage more than once.  Grizzly Bear singer Ed Droste remarked that both acts had just come from playing festivals in Australia (it’s warm festival season Down Under, this time of year) where they shared stages across a continent.  Not only that, but the two acts shared an aircraft carrier earlier this year as one-half of Pepsi Presents Stephest ColbChella ‘012 Rocktaugustfest, The Colbert Report’s big event aboard The Intrepid on the Hudson (QRO recap).

Grizzly Bear wasn’t as unsettled by playing the (yet again small-for-them) Bowery stage – probably because they’d played it before, even it was last only back in like 2006.  Still, they were probably more worried about being bumped from the performance the next day on Letterman (QRO Indie on Late Night TV), as not only had they previously been bumped from Dave (because the climate change-denying head of GM spent too long talking about The Chevy Volt), but had also missed their scheduled Late Night with Conan O’Brien appearance thanks to the writer’s strike (instead they did an in-store at the no-longer-a-store Virgin Megastore – QRO photos).  It being a ‘Year In Music’ show, Grizzly Bear’s set list (QRO photo) naturally stuck to this year’s Shields, just as Santigold had stuck to 2012’s Master of My Make-Believe, two records from SPIN’s year-end album list (another others’).

If the Mayans had it right, 2012 will be the last year for all of us (and the Mayans knew a lot – though somehow missed the far-sooner end of their own civilization…).  Even SPIN can’t tell you on what note the world would end musically, but sure threw a party to close it all out.