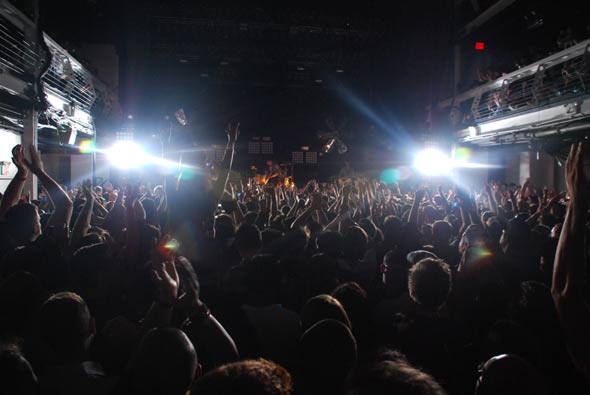 Has it really been twenty-five years for SPIN Magazine?  Somehow, the music publication seems newer than that, perhaps because it doesn’t wade in the past of rock ‘n’ roll journalism like (older) competitor Rolling Stone, perhaps because one doesn’t associate the magazine with a certain era or consumer base.  To celebrate their quarter-century, SPIN held a series of five shows in New York City, July 26th through 30th – and all were streamed live online, starting on Monday, July 26th at Terminal 5 with the latest incarnation of The Smashing Pumpkins, along with Kill Hannah, Bad City, and Jim Jones Revue. 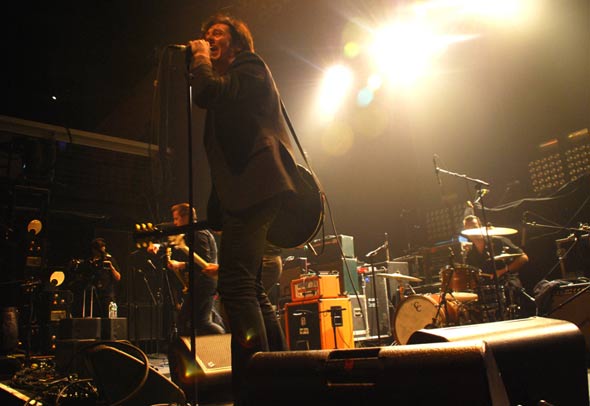 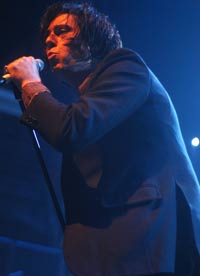 Kicking the evening off was the Jim Jones Revue, who played barroom-style seventies rock with more energy than most bands half their age.  They were really a revelation live for anyone who didn’t know them – or rather, would have been, had the crowd been the least bit interested.  This was a crowd of hardcore Smashing Pumpkins fans who’d waited in the massive line outside, and while Terminal 5 was fuller than it usually is that early in a show, with fans already hanging over the photo pit barrier, Jim Jones couldn’t get the kind of responses he deserved, even when pointing directly at fans.  And, to be fair, they are a band better appreciated in smaller barroom settings.  But hopefully at least some people in attendance picked up what JJR was putting down, because they were putting it down hard. 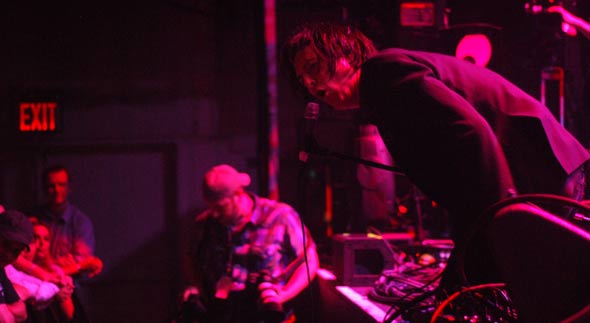 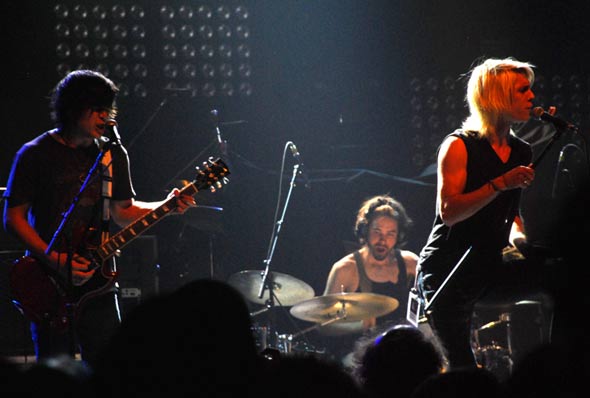 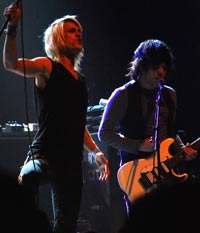 The openers to all of the SPIN25 shows had been announced rather late, but Chicago’s Bad City wasn’t announced until right before they came on stage.  Playing ultra-retro glam-guitar jams, if Jim Jones Revue (see above) was what was right about retro-revival, Bad City was largely what was wrong, being some time-warp to an Aerosmith also-ran who never teamed up with Run DMC & got a second life, seemingly more inspired by the prospect of an Almost Famous-like rock ‘n’ roll lifestyle than actual music.  They were also rather forgettable, with even attentive fans (like a certain well-known blogger) forgetting that there had been a band between Jim Jones Revue & Kill Hannah.

[note: due to confusion with security, your photographer wasn’t able to shoot Bad City from the photo pit, but only way up on the third floor VIP balcony] 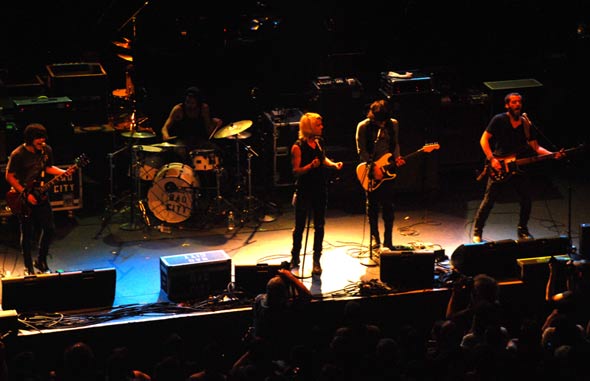 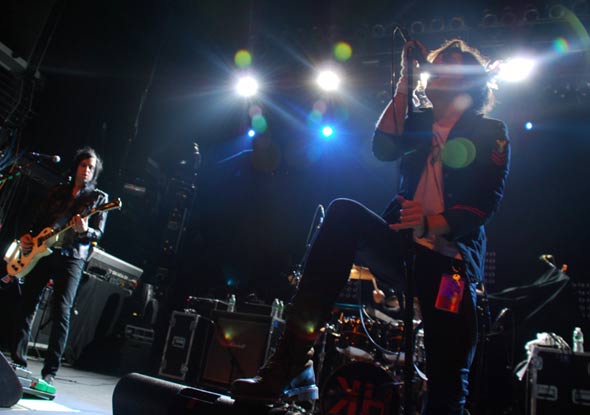 Click here for photos of Kill Hannah at Webster Hall in New York, NY on September 23rd, 2009 in the QRO Concert Photo Gallery 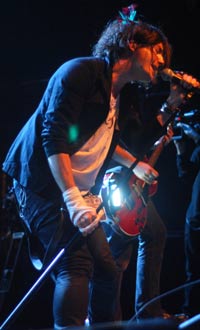 Just in case indie-fans didn’t know that this wasn’t their night, SPIN brought out one of the blogosphere’s least favorite acts, Kill Hannah.  However, a lot of what brings the hipsters to hate on this band has to do with associations: the band looks terribly emo, especially the hairdo of singer Mat Devine; they’ve toured with the likes of She Wants Revenge (QRO photos on that tour) and Paparoach; their hate-an-ex-girlfriend name; and they’ve been praised by the likes of Carson Daly. 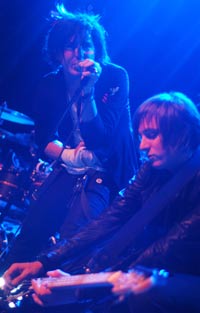 But take that last association: why do indie-types hate Carson Daly?  Total Request Live and dating Jennifer Love Hewitt was a long time ago.  Have they ever actually watched Last Call with Carson Daly, his show after (now) Jimmy Fallon (another object of hipster disgust, thanks to him replacing CoCo – QRO’s Indie on Late Night TV)?  Last Call has abandoned the standard talk show format (monologue & sketches before the guests, all in front of a live studio audience) for Daly hanging out in some bar with a shaky cameraman, interviewing guests, yes, but also the musical acts, even providing some history of them, before showing a performance taped from a regular live performance in a venue.  The late hour & no studio overhead lets Last Call book a ton of indie acts, and you even get know the band a bit, too.  Last Call hosted the U.S. television debut of Los Campesinos! (QRO spotlight on), so when Daly calls Kill Hannah, “A great Chicago act,” that should be taken as a positive, even by the hipsters.

So yes, Kill Hannah look like the caricature of an electro-emo act, and yes, their music can sound a bit like She Wants Revenge – but also like worthy indie acts such as BRAHMS (QRO photos) or Paper Route (QRO live review), the latter of which were also on the SWR/KH tour (QRO photos of Paper Route on that tour).  Of course, this comment will likely be derided by the ‘true indie music fans’ out there – be prepared for loads of hate if you, say, tweet that you actually like Kill Hannah… 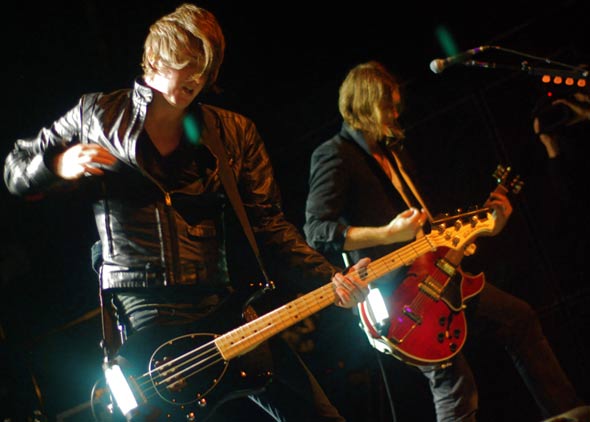 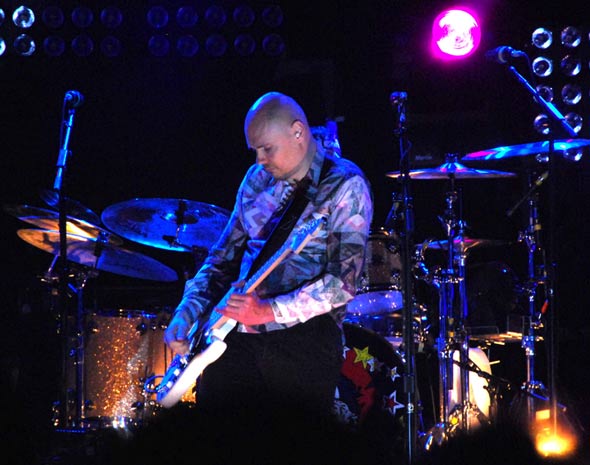 But all of the above was really a prequel/filler for the crowd, before the main event: The Smashing Pumpkins.  The band that boomed in the early nineties alternative/grunge wave, and has gone through multiple different configurations since then, still has a lot of fans – a lot of fans.  Before doors opened, the line to get into Terminal 5 was down the block and under the Hudson Parkway, headed towards the river.  In fact, construction on both sidewalks beneath the Hudson Parkway meant that the line snaked through the sectioned-off pedestrian area of the street.  Of course, the VIPs (which included some models you’ve never heard of, but also Michelle Trachtenberg – a.k.a., the little sister on Buffy, the Vampire Slayer) headed straight to the rooftop for some Asian BBQ, before going to the two VIP balconies on the house-lefts of the second & third floors of Terminal 5 for the show, leaving the stage floor and the rest of the balconies absolutely packed. 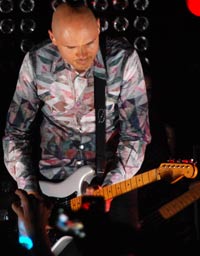 Now, this wasn’t The Smashing Pumpkins you remember, as even kicked out-and-let-back-in drummer Jimmy Chamberlin left the band last year, with only singer/guitarist Billy Corgan the remaining charter/recognizable member (akin to Courtney Love reviving Hole with a new line-up behind her – and Hole headlined SPIN‘s SXSW showcase – QRO photos).  But Corgan & co. did play some Siamese Dream (their 1993 breakthrough) like “Cherub Rock” & “Today”, along with all that came after it – and this wasn’t a crowd who just knew the early stuff, as later & newer material got rounds of applause as well.  Okay, the Gen X hipster would have rather seen them close with Dream‘s “Spaceboy” than the guitar-rock odyssey they did end with, but this wasn’t for those folks. 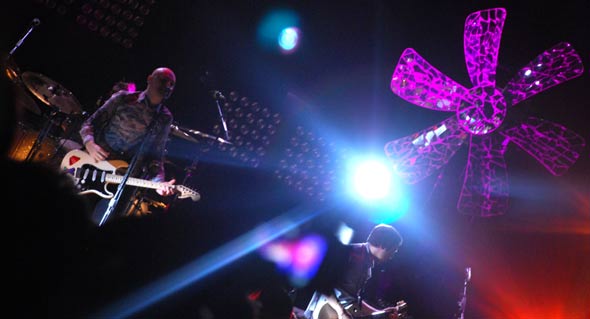 The most interesting throwback to way-back-when wasn’t a song, but Corgan, after saying something about being “your rock ‘n’ roll puppet”, saying he still has a beef with Pavement, and miming a puppet killing “the guy from Pavement”.  In case you’re too young to know what he was talking about, nineties alt-act Pavement have a song “Range Life”, wherein singer/guitarist Stephen Malkmus (“the guy from Pavement” – QRO solo live review) sang, “Out on tour with The Smashing Pumpkins / Nature kids, they don’t have no function / I don’t know what they mean / And couldn’t really give a fuck” (he also called Stone Temple Pilots – QRO photos – “elegant bachelors” who “mean absolutely nothing” in the same song).  Legend is that The Smashing Pumpkins got Pavement (QRO album review) kicked off the 1994 Lollapalooza tour The Pumpkins were headlining because of that line, and with Pavement reuniting this year (QRO photos), it was high time that this indie-feud was revived as well. 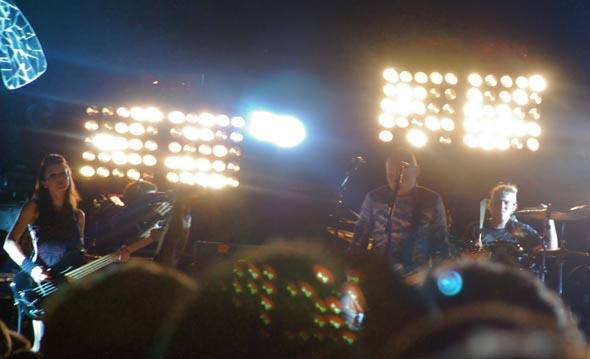 Was Corgan joking?  You really couldn’t tell.  But he did offer a real apology, “To all of our long-time fans: I’m sorry.”  For an artist not known for his small ego (see above paragraph, and below note), it was certainly a surprising admission, which the crowd loved (also loved being termed “long-time fans”).  With an audience that waited in the street outside before doors, who packed Terminal 5, who went through three openers, who put girls on their shoulders, it was exactly the right kind of note.

[note: right before doors opened, Smashing Pumpkins informed press that photographers couldn’t shoot from the photo pit for some reason, but had to take photos from the soundboard behind the crowd.  And even there, photographers couldn’t take a step up on the barriers to get above the crowd, as that bothered the sound & video crew.  So your photographer was only able to get photos of the oh-so-touchy Billy Corgan from far away, on tiptoes…] 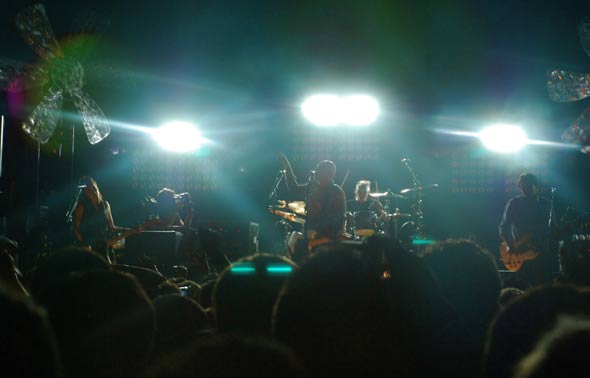 SPIN and co-sponsor Zync also put a lot of money into their live video stream, and it seriously paid off.  Terminal 5 (QRO venue review) has TV screens in the balconies and other places where you can’t get a good view, but they’ve always just showed a feed from a stationary center camera – not something worth paying the $$ Terminal 5 prices to go watch.  But the live stream was not only fed onto the internet, but also into those screens, giving a better view than from anywhere but right up against the barrier (and could get a drink, or at least not be crushed, while you watched it).  It presaged very well for the rest of the SPIN25 live streams, which have recently been rebroadcast.

Was this the best show of SPIN25?  Tuesday night’s Flaming Lips (QRO live review) really can’t be beat for a live spectacle, Wednesday night’s Black Keys (QRO album review ) have killed it at Terminal 5 before (QRO photos), Thursday night’s National are quickly becoming one of the best bands out there (QRO album review) – and were returning to T5 after having opened the venue (QRO live review of The National the night after), and Spiritualized’s Friday show (the only one not at Terminal 5, instead at Radio City Music Hall – QRO venue review) was a special one, as they were playing their Ladies and Gentlemen in its entirety, with a live choir & orchestra.  And the hipsters would find a million reasons to hate this show.  Plus, no James Iha?!?  But SPIN has appealed to a wide span of music-lovers in their twenty-five-and-counting years, and the first night of SPIN25 certainly appealed to a ton of fans. 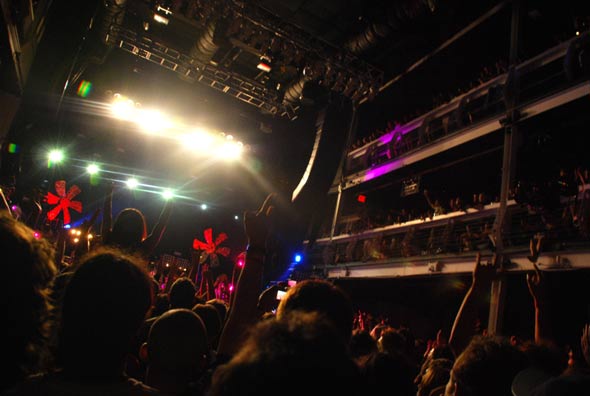