Fall of '09 is officially 'the season of the other guy split-up, alt-iconic bands', like Spiral Stairs, once (and will be again) of Pavement. ... 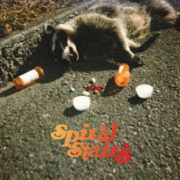 At first listen to The Real Feel, the return of Scott Kannberg, a.k.a. Spiral Stairs (and before that, Preston School of Industry, and before that, Spiral Stairs of Pavement – QRO album review), might come as a shock, even a disappointment.  This is the return after a five-year hiatus of ‘the other guy in Pavement’, the only one who singer/guitarist Stephen Malkmus (QRO live review) ever let get a word in edgewise, one-half of who’s burying the hatchet for the long-anticipated reunion next year, the under-appreciated one, the writer of “Painted Soldiers” (QRO album review) – and he’s gone garage-blues/alt-country?…

But, in reality, this move was well presaged by Kannberg’s post-Pavement work in the first half of this decade, as Preston School of Industry, where he embarked on the alt-country path before it was ‘cool’.  However, what wasn’t foretold was the garage-blues bent of his return, now back under his Pavement-era moniker of‘Spiral Stairs’ (akin to Frank Black returning to his Pixies-era name, Black Francis – QRO album review).  But what’s really important is how The Real Feel sounds, and once you get over whatever you might have beenshocked by, ‘Prestairberg’ delivers really well.

Opener “True Love” nicely (re)introduces Kannberg’s garage-blues with some alt-country twang, but he’s actually best when he goes even further into the blues, and/or away from softer alt-country.  The following “Call the Ceasefire”, orfinal song “Blood Money” brings the bluesman out of Kannberg, but not grizzled before his time, just a nice wear to his soul.  When he relaxes on The Real Feel, Kannberg can be a bit simple, such as with “A Mighty Might Fall”, but when he goes for the catch & fun, he delivers, likein the up-march “Cold Change”, dirty-jangle “Subaico Shuffle”, or garage-blues-catch “Maltese T.” There are also a couple of odd moments near the end of The Real Feel, such as the seventeen second tech-sound title track, or the added-on recording of (presumably) Kannberg getting an older, distinguished, British-sounding woman to introduce him & his new/old name.

If recent years have been the years of the alt-rock reunions, then fall of ’09 has been the season of the ‘other guy in the iconic, split band’: within a month, Lou Barlow of Dinosaur Jr. (QRO live review) released Goodnight Unknown (QRO review), Grant Hart (QRO interview) of Hüsker Dü (QRO spotlight on) released Hot Wax (QRO review), and now Spiral Stairs of Pavement (unfortunately, Jay Bennett, ex-Wilco – QRO live review – and the one who coined the term ‘other guy in [band X]’, just recently passed away). And while not all hatchets have been buried (still waiting, and waiting, for that Hüsker reunion between Hart & Bob Mould – QRO live review – who, oddly enough, Kannberg recently toured with…), Barlow & J Mascis have buried it for Dinosaur Jr.,before them Kim Deal (of The Breeders – QRO live review) & Francis for Pixies (QRO live review), and soon Malkmus & Kannberg for Pavement (though one shouldn’t forget about the other other guys inthose bands, like Hüsker Dü’s Greg Norton, Dinosaur Jr.’s Murph, or Pavement’s Mark Ibold, now of Sonic Youth – QRO live review).  Yet these ‘other guys’ have also been making a name for themselves, something Kannberg does nicely as Spiral Stairs (again).