The sun shone brightly in Robin Hood country as a crow of 20,000 filled Wollaton Park for Nottingham’s forth-annual Splendour Festival....

The sun shone brightly in Robin Hood country as a crow of 20,000 filled Wollaton Park for Nottingham’s forth-annual Splendour Festival on Saturday, July 18th. Born out of the ashes of the free festivals of the nineties at the same venue, Splendour is Nottingham’s most popular festival with a real family friendly feel.

Set in the shadow of Wayne Manor (Wollaton Hall, the setting for Batman’s home in the blockbuster Dark Knight Rises), the festival is a one day event with two main stages, an acoustic area and comedy tent with a large selection of local acts mixed in with a couple of rising stars and some real nostalgia. 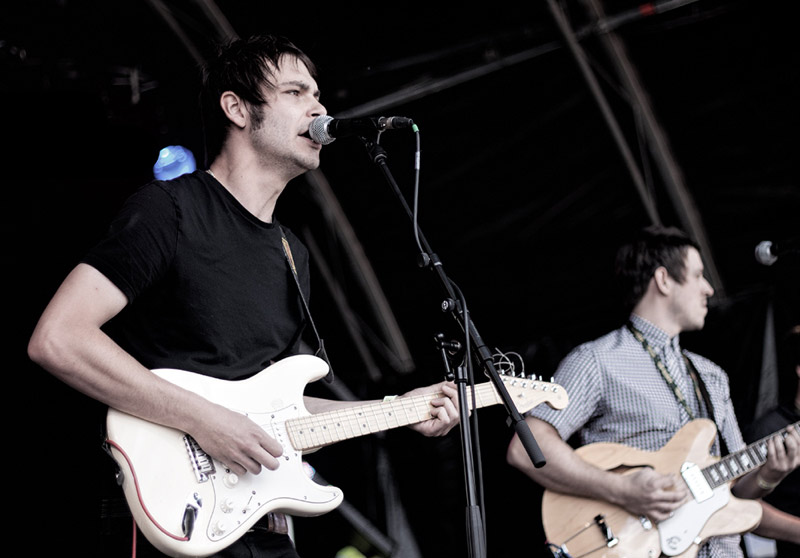 Locally, we were served with the indie rock of Amber Run, electronica from Indiana and the folk-punk of Ferocious Dog while headliners The Specials led the nostalgia with festival favourites James and the eighties pop of Bananarama. Lawson gave us a new act on the rise and the crowd reflected this with a large smattering of 40s and 50s types mixed in with the raucous teenagers here for the sun and a lot more. 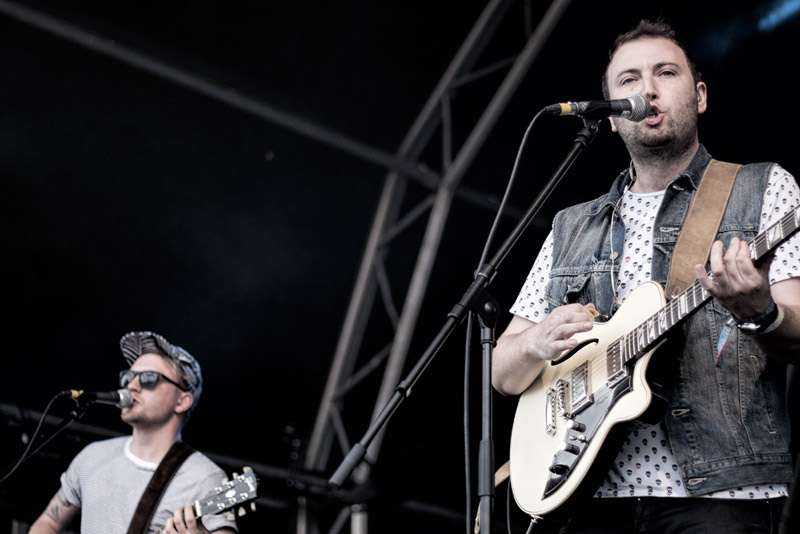 On the main stage London’s To Kill A King opened but barely registered before Nottingham’s own Amber Run brought a sizeable young crowd to their pretty standard mid-tempo indie rock. Compared to The National and Grizzly Bear on their wiki page, they sounded nothing of the sort and it was all a bit heartfelt but forgettable. 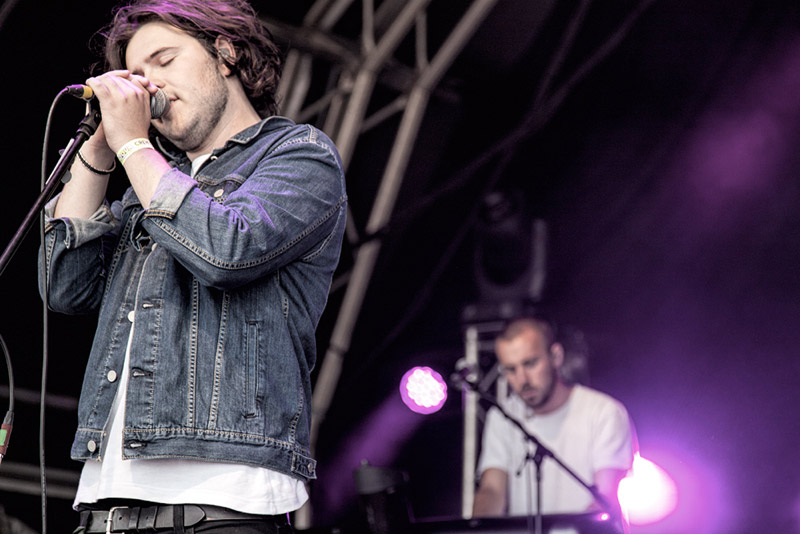 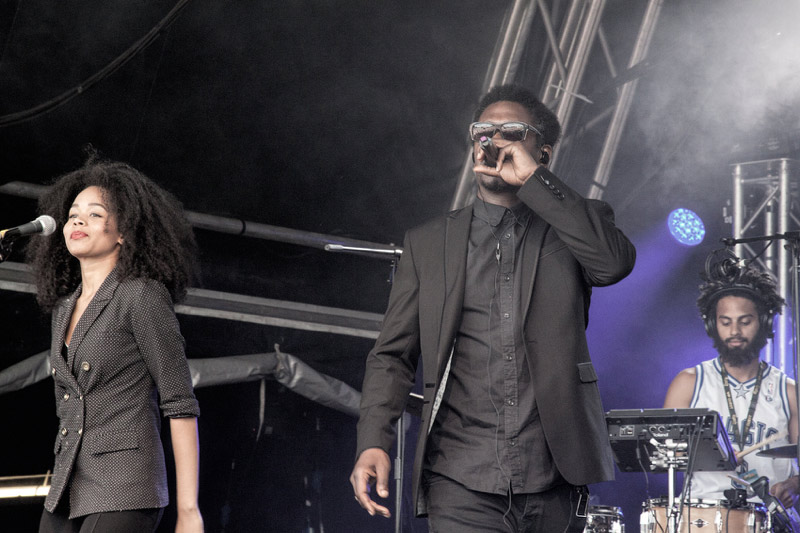 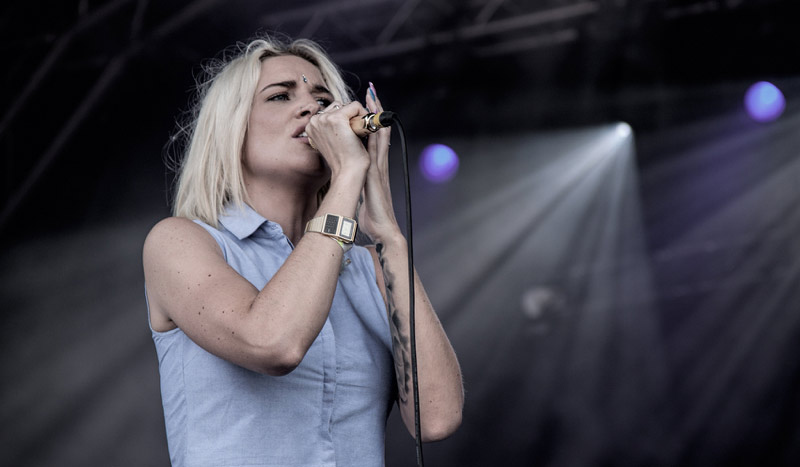 Stand in for the missing Jess Glynne, Indiana claimed by the crowd as one of their own, gave us a set of her dance electronica pop that sounded pleasant enough, but felt a bit flat in this setting at this time. There’s a feeling a more intimate surrounding would get the best out of songs like her chart U.K. hit “Solo Dancing”. 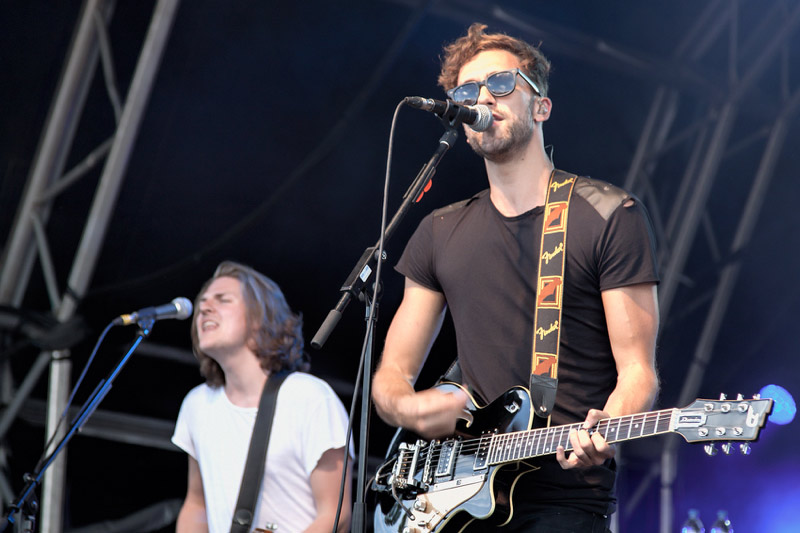 The first bona-fide crowd pleasers were Lawson with their The Script-esque indie-pop/rock. The girls at the front screamed and sang every word as they recovered from technical difficulties to deliver a 45-minute set of crowd pleasers. It was all a bit indie-light, but they were straight from the sell-out arena of Sheffield the night previously and Lawson look like a marketer’s dream – good-looking lads with heartfelt songs to sing along to. While the youngsters lapped it up, those waiting for the night’s headliners – James and The Specials – looked on mainly bemused. 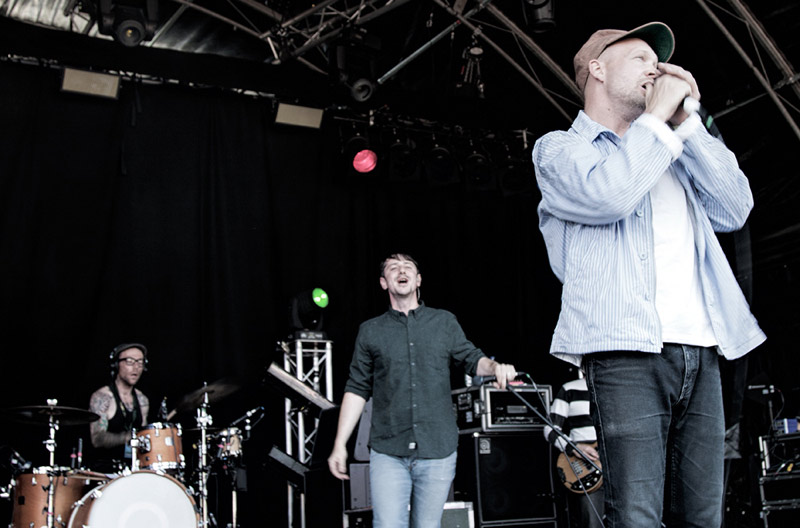 Over on the other stage the Celtic-folk-rock, straight out of The Pogues via The Levellers – Ferocious Dog literally ripped the stage to bits, with a sizeable crowd taking their cue to bound about with the enthusiasm shown on stage. Though from Nottingham, there is more to the Ferocious Dog than just local favoritism. After a well-received set at Glastonbury there was a feeling that they might just have nicked best band at Splendour. 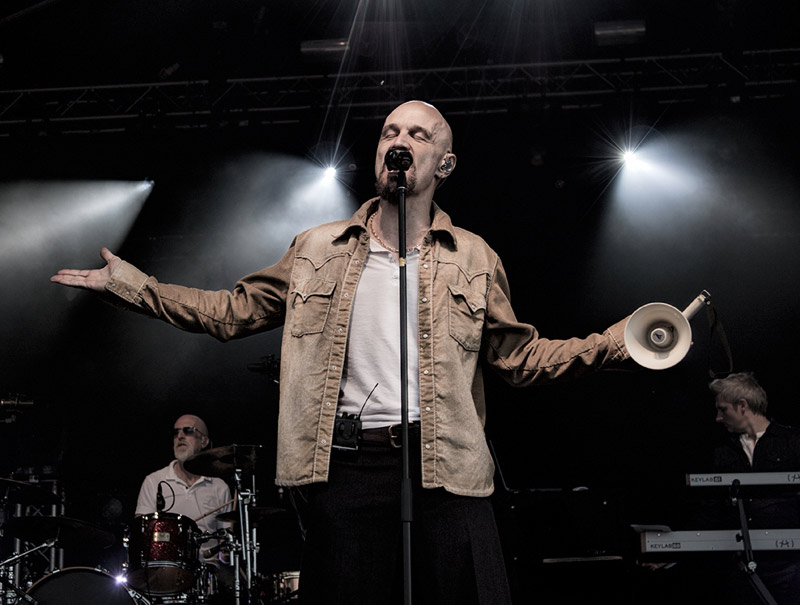 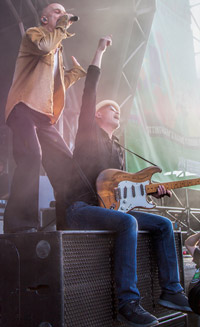 Back on the main stage festival, however, and arena favourites James took over that mantel with effortless ease, guiding a sing along crowd through hits like “Sound”, “Sit Down” and “Come Home”. Here is a band totally at home on the stage with frontman Tim Booth (QRO interview) a bundle of energy in cowboy shirt and flares. Looking a lot like Michael Stipe with a hell of a lot more than that in common with the R.E.M. frontman, he led the crowd through perennial favourites and a smattering of new songs from last year’s La Petite Mort (QRO review). Though “Gone Baby Gone” proved a bit of a damp squid, sing-alongs “Sit Down” and set finishing “Laid” and “Sometimes” infused the crowd with the dance-along mentality missing from Lawson that would surely be dragged into headliner’s The Specials’ arrival. 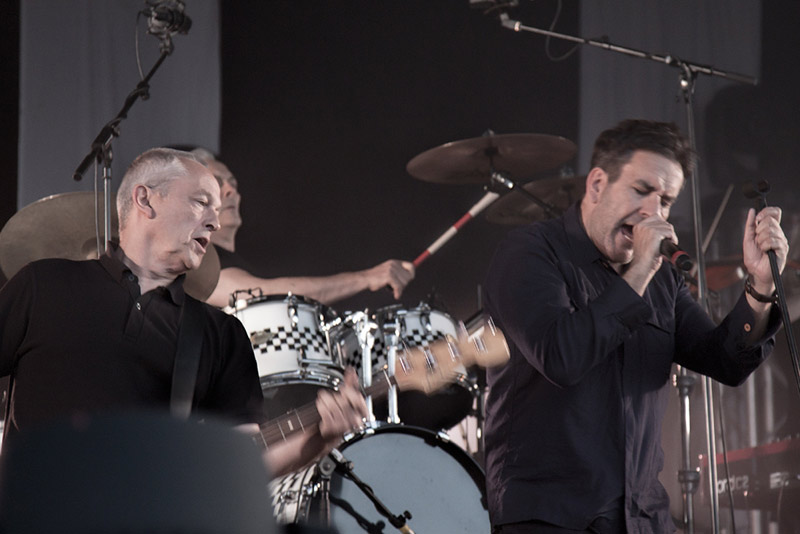 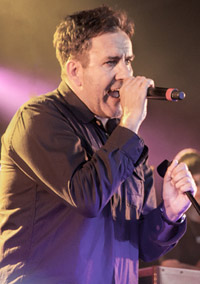 “If you are sitting down please move back behind the mixing desk as we want to turn the front into a giant dancefloor,” came the announcement before a wave of police sirens introduced “Ghost Town”, and the crowd duly obliged for a ninety-minute set of barnstorming stompers, dub and skanking tunes. Now in their late fifties and early sixties, The Specials have enough musicianship and professionalism to stand above the crowd even though they are now down to just four original members. Whilst they did lack a bit of sparkle without Neville Staples bounding about the stage, Lynval Golding took frontman duties at the edge of the stage with his blistering rhythm guitar licks, while the ever deadpan but perfectly poised Terry Hall hit every note. Through requests of ice cream and liquorice, Hall still sounds like a singer still at the top of his game, and was aided and abetted by the ever-on song rhythm section of Horace Panter and John Bradbury. 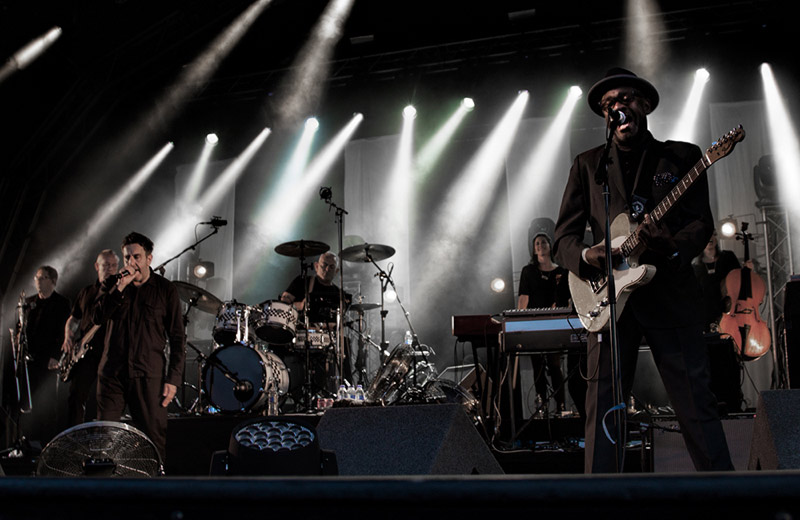 The crowd sang, skanked and stomped their way through “Man at C and A”, “Rat Race”, “Too Much Too Young”, and, as darkness fell, into set finishing covers “Enjoy Yourself” and “You’re Wondering Now”. Just how long The Specials will carry on for is a mystery, but at Splendour they delivered enough for the crowd to believe that they can stick around for a good while longer yet. 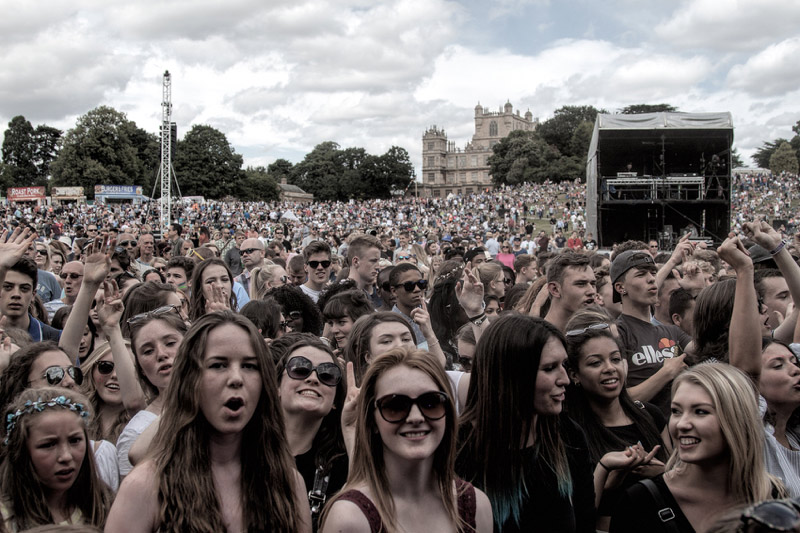