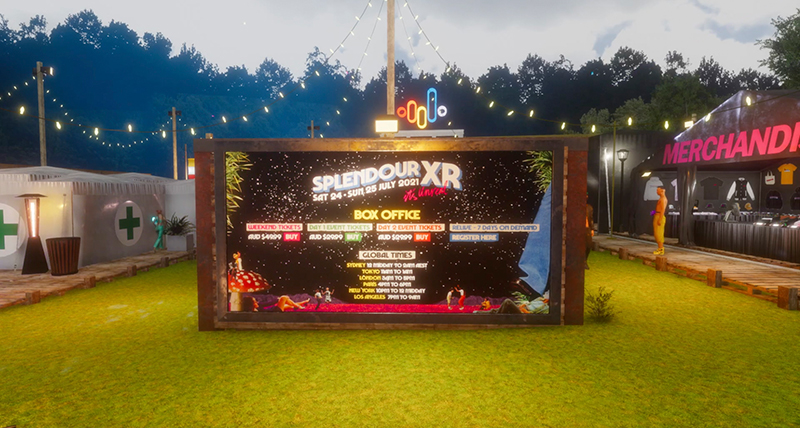 As the worldwide COVID pandemic took so much away, it forced us all to get creative, even push into the future by speeding up things like remote work. Live music was hit especially hard, being the ultimate super-spreader with sweaty bodies pushed up together & mouths open for singing, cheering, and drinking. Australia’s biggest music festival, Splendour In the Grass, canceled in 2020 like everyone else, but in addition to scheduling a 2021 edition in November (fingers crossed), put together Splendour XR, the first virtual reality music festival of its kind. On Saturday & Sunday, July 24th & 25th, avatars congregated in cyberspace to experience the Splendour.

[note: your correspondent doesn’t have the gear needed to go full VR at Splendour XR. Its host program Sansar doesn’t even work on his Mac. Instead, he watched it through his web browser like some Luddite. So, didn’t do the virtual reality experience of creating some crazy character that would bust moves with others from around the globe, going from one stage to another in 3D]

[second note: your correspondent is also in the American Eastern Time Zone, which meant he was way off the Australian Eastern Time Zone that the festival was set to. The first acts of a day went on just after 2:00 PM Down Under – which was just after midnight EST, the event pressing through the wee hours into daylight. However, the post-festival RELIVE rewatch meant he could catch the acts he lost to overlaps & sleep]

Splendour XR opened on Saturday with a couple hours of lead time, which people could use to figure out how this whole thing worked, from figuring out chromecasting from your mobile to your smart TV to realizing that you needed VR to have the full avatar walk around experience. For those in regular reality, there was an international chat (folks from the likes of even Brazil and Estonia), which did have a lot of, ‘Mine isn’t working’ and help from the festival staff. Later chat would, among other things, enjoy talking drugs (literally exchanging numbers), with none of the sniffer police dogs that have been imposed on Splendour In the Grass.

There were of course technical issues, perhaps most notably (in non-VR) that the chat’s downward scroll would make the whole screen scroll down – after a bit of time, even without scrolling, so sometimes the screen will scroll down out of the blue, unprompted. But given the unprecedented nature of the event, it all worked pretty damn well.

Each stage had multiple camera angles, from just watching the performance without avatars to viewing from deep in the crowd. Admittedly, without one’s own avatar, it was not that interesting seeing anything other than the straight performance, particularly as the area up front seemed to be cordoned off, VIP style, without a packed avatar audience. And most of the performances were essentially put up on a giant screen in the other camera angles, though a few artists did their sets in front of green screens, visually more integrated with the crowd.

Every stage began with a ‘Welcome To Country’ film of the region’s native aboriginal welcoming to the land. Splendour In the Grass takes place in the native country of Australia, giving respect to the land, its people, and its traditions.

Opening the main Amphitheatre was King Stingray, a next generation mixed Aboriginal/Caucasian group, with members related to Yothu Yindi of the nineties, hailing from North-East Arnhem Land. Their surf-rock (with mixed language vocals) was a really nice kickoff to the festival, setting the tone and grounding the event. Meanwhile, the more electronic Mix-Up Stage started with Cat & Calmell, a really charming pair of girls with a band (going in, it looked like Mix-Up was going to just be an EDM DJ stage, a-la Perry’s Tent at next weekend’s Lollapalooza – QRO preview – but that thankfully wasn’t the case). They won over a lot of new fans with their sweet, sad electro-pop on songs like “dumbshit”.

The McLennan Tent threw back to the Spirit of ’77 punk rock with The Chats, thanks to their working class roots & (Aussie) accents. Yes, they shouted “Oi!” multiple times at one point, but that’s what you should hear from a band whose website is www.thechatslovebeer.com. Throwing back to the eighties cheese was Client Liaison in the Amphitheatre, including synths, prominent saxophone, hair, outfits & more. Catchy, if a little artificial, they did really use the pre-recorded aspect of the event for full visuals, including background actors/dancers, like a music video from that heyday of the art form.

Methyl Ethel entered with their own matching white jumpsuits at the McLennan Tent. Filmed in a warehouse, they had full multi-camera work, even some screen effects, for their more searing electro-pop. On the Mix-Up Stage Tayla Parx brought her own, very charming R&B, including great back-up dancers and full-on choreography. It was really nice at Splendour XR that it wasn’t just the big names but also those lower on the bill that had eye-catching professionally put together sets – as Parx would say, “It’s rude not to stare.”

Late add Skegss brought their cheery garage-rock to the Amphitheatre. If not wholly original, they were relaxed & enjoyable (and most of their set benefited from being the only act playing at any of the three main stages at the time). Perth’s POND delivered their psych-rock (that does bear a similarity to their friends & townsmen Tame Impala), flute included at the McLennan Tent. The visuals were a little hazy, but that worked for the group. Meanwhile, there was sweet R&B from Pink Sweat$ on the Mix-Up Stage, with full band & horns.

The first artist to go green screen was Aurora at the Amphitheatre. While this meant no fancy camera work or effects, it reflected the actual festival appearance, integrated with the crowd, and you could do your own camera work by switching angles and getting different sights. And being a smaller size on the stage worked for the cute, shy Norwegian. Griff’s McLennan Tent performance was filmed as almost entirely just her, because her really heartfelt R&B pop is about being alone.

Usually, comedy at a music festival is a difficult prospect, a shift not just in genre but whole atmosphere, from the wide-open stages to an intimate tent, not to mention straining to hear over the bands. But the virtual nature of Splendour XR made it all much smoother, taking one to see a number of stand-up comedians who were in front of an actual audience in Melbourne. They were definitely Aussie comics, not just in accents but some references, like British colonialism, Australian Rules Football Women’s, and Prime Minister Scott Morrison. But most of the humor was broad in accessibility, like being too old to be cool at festivals, parents, relationships, and the pandemic. After watching multiple acts that you probably didn’t know much/any about, it was a nice break from all of that before the day’s second half.

Even more than Griff, Tash Sultana was solo at the Amphitheatre, but it’s her usual approach, with multiple keyboards & loops (and a big pair of headphones), yet also touching acoustic guitar. Vera Blue delivered intimate emotionalist restrained electro-pop to the Mix-Up Stage (her starry evening lighting worked well for the hour – in Australia, but the morning sun was coming up in America…).

Hip-hop at alternative music festivals is standard now, but it was still a question of how much that would come Down Under. Thankfully, Denzel Curry brought some unapologetic American rhymes to the Amphitheatre. It’s not easy being a rapper at a festival, as it’s often just you & a DJ up on the big stage, and doubly so for a livestream, without the crowd that is so essential for hip-hop, but Curry pulled it off. He had an advantage in the camera work, able to be active and close up. Later, Little Simz brought strong U.K. female rap with an R&B backdrop to the Mix-Up Stage.

While we were all shut at home last year, we all fell in love with Phoebe Bridgers. Her Punisher (QRO review) may not have won any of the Grammys it was nominated for, but it won our broken hearts, as did Bridgers herself, with her delightfully awkward and self-deprecating humor. She played in her pajamas in her bedroom, but also big production numbers (QRO review) and numerous music videos (QRO review) – and made skeleton onesies a fashion statement.

No special fashion for her McLennan Tent set, with Bridgers and band seated in a studio, but there were some great asides, like her trying to burn her band (noting that one guy gave her scabies, another thought you couldn’t flush toilet paper in Germany, but the worst burn was that her drummer was also her ex…). The performance was very soft and intimate, more in the vein of alt-Punisher takes EP Copycat Killer (QRO review), playing the songs you had on repeat at the height of the pandemic. Bridgers described “Chinese Satellite” as about how God doesn’t exist and Elon Musk, but doesn’t hate Musk (husband of Sunday performer Grimes), because she “don’t want to cut her Tesla tie,” while “Kyoto” was more simply about her dad. After obsessing over her last year (Phoebe Bridgers getting Fleabag star and near-namesake Phoebe Waller-Bridge to direct the video for “Savior Complex” – QRO review – was peak 2020), it was great to see her return – still only online, but we’re getting there (and she was right about Eric Clapton…).

If there’s a current act well set for a virtual performance, it is CHVRCHES. Of course, their big electro-pop had many, many of their own screens behind them and full-on visuals at the Amphitheatre. Indeed, the whole thing seemed to be done on some sort of green screen, making one think that singer Lauren Mayberry wasn’t even in the same room when it was done, but it was still just on the big screen for the avatar crowd. They opened with new single “He Said She Said” from the upcoming Screen Violence (out August 27th), and they had very up-anthem energy that works well deep into the evening (if not so much at 8:00 AM EST…). If she makes one think of Natalie Portman as a kick-ass frontwoman, that’s a positive.

On the integrated green screen was Band of Horses at McLennan Tent. Playing with only three of the five members of the band, it was a stripped down, seated set, very different than overlapping CHVRCHES. The group did play intimate, joking with the ‘crowd,’ even having someone off-screen early on shout for their breakthrough hit “Funeral”, which main man Ben Bridwell is notorious for hating to hear being demanded – “I’ll play your funeral…” Of course, they still ended with it, thankfully.

Headliner Khalid brought smoother sounds and a very full band to close the Amphitheatre – when your correspondent was too damn sleepy. He also missed the Mix-Up Stage’s Russ Millions – who only played a fifteen minute set – and the day/night’s big EDM close with Duke Dumont, but caught the latter on RELIVE, where he spun in front of a massive screen and massive lights in a massive space.