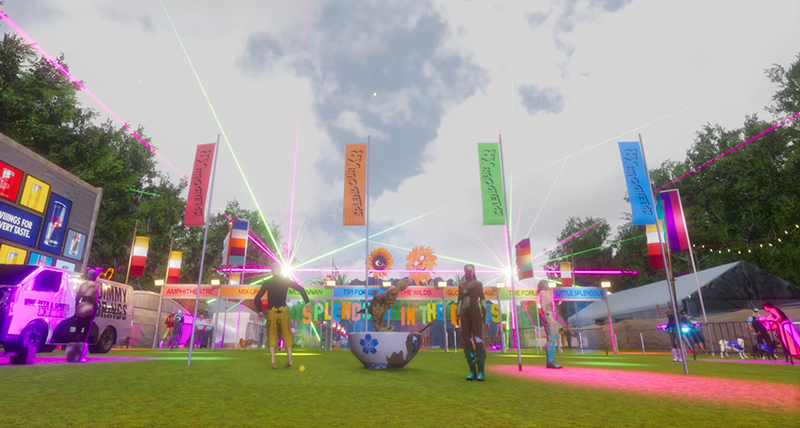 As the worldwide COVID pandemic took so much away, it forced us all to get creative, even push into the future by speeding up things like remote work. Live music was hit especially hard, being the ultimate super-spreader with sweaty bodies pushed up together & mouths open for singing, cheering, and drinking. Australia’s biggest music festival, Splendour In the Grass, canceled in 2020 like everyone else, but in addition to scheduling a 2021 edition in November (fingers crossed), put together Splendour XR, the first virtual reality music festival of its kind. On Saturday & Sunday, July 24th & 25th, avatars congregated in cyberspace to experience the Splendour.

[note: your correspondent doesn’t have the gear needed to go full VR at Splendour XR. Its host program Sansar doesn’t even work on his Mac. Instead, he watched it through his web browser like some Luddite. So, didn’t do the virtual reality experience of creating some crazy character that would bust moves with others from around the globe, going from one stage to another in 3D]

[second note: your correspondent is also in the American Eastern Time Zone, which meant he was way off the Australian Eastern Time Zone that the festival was set to. The first acts of a day went on just after 2:00 PM Down Under – which was just after midnight EST, the event pressing through the wee hours into daylight. However, the post-festival RELIVE rewatch meant he could catch the acts he lost to overlaps & sleep]

Admittedly, the unprecedented nature of Splendour XR wasn’t as unprecedented on Sunday (and it was no easier for your correspondent to stay up in America), but it also easier to handle the event – so like a regular new festival. Chat got even lower brow, joking that drugs were now at the virtual med tent now, and the festival/tech support “Event Help” in the chat was the hardest working person of the festival – did have a nice joke when someone asked if performer Grimes’ famous husband Elon Musk was in the chat, Event Help noted, “Elon Musk is everywhere.”

Usually before you go to a music festival, you say that you’re gonna check out some new acts early in the day, really take the whole thing in – but end up arriving late and looking for shade while lesser known artists play big stages to not-so-big crowds. But there was no excuse to come late to Splendour XR (and you had not only shade but also air conditioning), so got to see some people you didn’t know, like Gretta Ray opening the McLennan Tent. The 2016 Triple J Unearthed winner brought her soulful indie-pop, along with reminiscing about playing her first big stage a few years ago at Splendour In the Grass.

But chat was particularly excited for Japan’s Band-Maid at the Amphitheatre. The young ladies might dress up like maids, but they rocked some heavy glam metal (in their native tongue), and definitely got some new fans. The Snuts brought some slyer rock n’ roll with heart to the McLennan Tent – though seemed to be playing in their apartment (even cam footage from outside). Like Day One, even the low on the bill acts had good visuals and sound.

Those high production values continued with the sultry R&B of Sinéad Harnett in the McLennan Tent and more hopeful soul of Wafia on the Mix-Up Stage. But there was also Spacey Jane at the Amphitheatre, who brought cheery mainstream rock with a country tinge. They kind of made one think of a nineties band that all the real alt-kids thought was lame – the frontman was even wearing an annoying hat.

Yesterday Splendour XR had the touted psych-rock of Perth’s POND, and for Day Two there was the even more touted King Gizzard & The Lizard Wizard of Melbourne at the Amphitheatre. They’ve been making waves around the world with their many, many records (just released like their third microtonal album, Butterfly 3000), giving more shades of Ty Segall, or a later day Guided By Voices, than using Aussie psych namecheck Tame Impala. They played in front of a green screen, which enabled better crowd effects (including flames in the pit), though the large group was kind of all squeezed in their box. Definitely skilled, if overhyped (at least to music critics always hearing about their umpteenth latest album…).

Your aged male music critic should have preferred those critical darlings, but instead was more into the much younger Holly Humberstone at the McLennan Tent. Her solo performance was touching, seemingly done inside a big closet and other spots in her house (still with good video). She kind of looks like a younger version of Ted Lasso’s Keeley Jones (Juno Temple).

What do you prefer (or dislike less): too ambitious or not ambitious enough? Japan’s neo-jazz collective Millennium Parade didn’t lack ambition at the McLennan Tent, but perhaps with too many musicians, too many instruments, even too much faith in themselves. Interesting but all over the place, even their special video effects were marred by camera work that couldn’t stay in place for more than a few seconds.

Meanwhile, Crooked Colours (with an extra “u” like “Splendour”) on the Mix-Up Stage and Jungle Giants in the Amphitheatre swung the other way, with simpler, smoother, disco-influenced synth-pop. Certainly nice, but hardly gripping at this point, and god knows there’s already a lot of that out there (though Colours only played like half their scheduled time).

If Day Two’s King Gizzard matched Day One’s POND in Aussie psych, the throwback Aussie punk of Day One’s The Chats was matched by Day Two’s Amyl & The Sniffers in the McLennan Tent, whose frontwoman really reenergized Splendour XR. “Time-traveling DJ” Hot Dub Time Machine tried to bring his own energy to the Mix-Up Stage, spinning in front of a green screen for virtual integration, yet also had a back screen showing footage appropriate to the eras he was playing from. However, the limited number of VR dancers in the up-front space took something away.

While a few artists played in front of green screens, and most did special set filmed exclusively for Splendour XR, there were a two who just delivered filmed concerts from the before-times. The Avalanches’ Enmore Theatre set in Sydney was put up at the Amphitheatre, which did make the smooth pair of DJs stand out from the day’s other smooth acts, but did also point out the remove of the situation (particularly as even some in Enmore weren’t standing for them). Black Pumas were at Stubb’s in Austin (singer literally said so in the performance), which is a great outdoor venue (that QRO’s been missing with two canceled SXSWs…), though maybe didn’t work so well for Aussie viewers (or perhaps they liked seeing a foreign space). Still, it was good to see another highly-hyped act, with soul-rock in the McLennan Tent.

There was a second day of comedy at Splendour XR, again, not as special, but easier to find. Of note over both days was the gender & sexuality diversity of the comedians, including lesbian, asexual, and trans. Again, some Australia-specific material (this time wildlife like agapanthus flowers and Huntmans spiders), but also jokes on Splendour In the Grass attendees, from glitter girls to undercover cops (one was in the audience).

The relax of earlier in the day continued into the evening (or very early morning in America), and doing it better was Of Monsters and Men at the Amphitheatre. The Icelanders were all seated, “Doing it a little bit differently. A little slower, a little more boring,” said co-frontman Ragnar Þórhallsson. One might have wanted to see them do their big electric 2020 single “Visitor” (QRO review), especially after how good it was on the Tonight Show (QRO review), but it was interesting to hear frontwoman Nanna Bryndís Hilmarsdóttir perform it so somber. There is a quality to this sort of set, and Of Monsters and Men did it well.

Meanwhile, Ocean Alley might have been standing (in some seventies-like house) in the McLennan Tent, but were so relaxed as to be easy listening. Thankfully JUNGLE had a full show on the Mix-Up Stage, that livened up their own smooth sounds.

You could probably tell how someone felt about Splendour XR as a whole by how they felt about Charli XCX at the Amphitheatre. She performed behind a green screen, but it was just her, dancing & singing. It made her look very small (but still rocked the sports bra and shiny biker shorts), and again there weren’t enough avatars up front, but she has a super-presence on any stage, real or virtual. And, as we all know, she’s a nineties bitch, who declares, “I Don’t Care!”

Likely the biggest Australian act playing the Australian livestream music festival was Vance Joy, who folks were definitely excited to see close out the McLennan Tent. His set was filmed atop a palace in Barcelona, definitely a unique and beautiful setting, helping out that it was mostly just him up there (but still high-grade multi-camera work). He played for the first time “Missing Piece”, a song so new it was written over Zoom. And he did get some help, bringing out socially distanced saxophone player Marta for the final four songs, “You”, “Fire in the Flood”, “Lay It On Me”, and closer “Riptide”.

Going another direction in intimacy was Kaytranada at the Mix-Up Stage. His DJ set was filmed at a poolside party with friends, definitely unusual, though so relaxed as to become background music. Also, one couldn’t help but feel that you’d never get invited to this party, and no one there would ever talk to you.

Brandon Flowers opened The Killers’ headlining Amphitheatre set by asking, “Are we human?”, but he’s actually looking more like the undead Spike from Buffy the Vampire Slayer (not a bad look, though). Guitarist Dave Keuning looked more like Dave Mustaine of Megadeth, while drummer Ronnie Vannucci Jr. like Diedrich Bader in Office Space, a.k.a. awesome – one major advantage of the livestream was that you could see Vannucci behind the drums. Though geriatric millennials might sniff that the band has never matched breakthrough debut Hot Fuss, one can see why their anthemistic pop-rock has kept them so popular. While they didn’t showcase anything from next month’s Pressure Machine, yes, they still did “Mr. Brightside”, because “Somebody Told Me” it was the best of “All These Things That I’ve Done”.

Late add 2manydjs spun at the Mix-Up Stage, but your correspondent was too tired as the sun was back up in America (so he caught their spinning & visuals effects in RELIVE). He also missed “Grimes Metaverse (Super Beta)” – which was moved to her Discord channel for some reason, but the ever-helpful Event Help provided all with the link to it – and it was made available as part of the RELIVE, though just the audio.