This isn’t only a great time to catch someone play that new record that helped you through the worldwide crisis, but also to catch veterans whose whole extensive body... 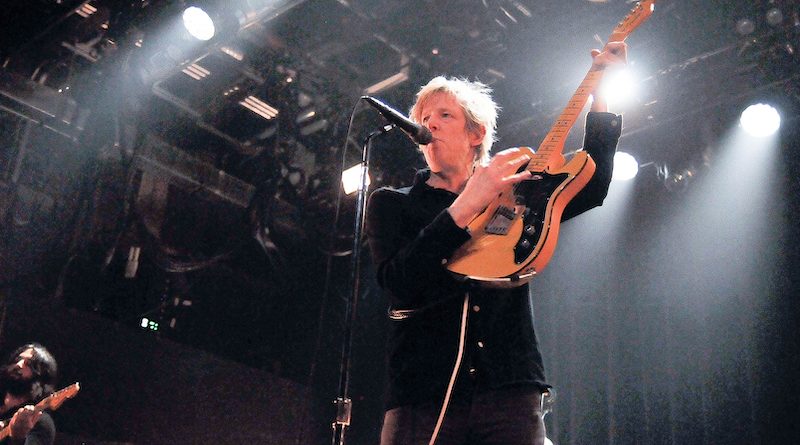 The COVID hiatus for acts touring has meant that, in addition to all those who released a record over the break getting on the road if they can, so have acts who don’t have a new album out, but have just missed the road (both emotionally and financially). This isn’t only a great time to catch someone play that new record that helped you through the worldwide crisis, but also to catch veterans whose whole extensive body of work has helped you for years & years. Veterans like Spoon, who came to Brooklyn Steel on Saturday, October 23rd with old & new in tow.

Special first mention of opener Nicole Atkins, who is finally getting to tour last year’s great Italian Ice (QRO review). While she lives in Nashville, she’s from Neptune City, New Jersey, and indeed mentioned that the last show she saw, pre-COVID, was right there are Brooklyn Steel (QRO venue review). Always a charmer, she won over those who were still coming in to the venue, and still coming back to the idea of going to shows.

QRO’s review of Spoon at Brooklyn Steel on November 28th, 2017

Photos of Spoon at 2017 Bumbershoot in Seattle, WA

Photos of Spoon at 2017 Project Pabst Portland in Portland, OR

Photos of Spoon at 2017 Lollapalooza in Chicago, IL

Photos of Spoon at 2014 Boston Calling in Boston, MA

Photos of Spoon at 2014 Music Fest NW in Portland, OR

Photos of Spoon at 2014 Lollapalooza

Photos of Spoon at NXNE 2014 in Toronto, ON, Canada

Photos of Spoon at 2014 Governors Ball in New York, NY

Photos of Spoon at 2014 NOS Primavera Sound in Oporto, Portugal

Photos of Spoon at 2014 Primavera Sound in Barcelona, Spain

Photos of Spoon at 2010 Musicfest in Union County, NY

Though they’ve been around since the early nineties, Spoon doesn’t feel like an ‘old band.’ Perhaps because they never had a massive hit that would inevitably date them, or came up during a certain wave of music – too late (and too cool) for the nineties alt-rock boom, but too early (and too skilled) for the aughts garage-rock revival. They’ve just been delivering & delivering for a few decades now, each record strong, most recently with 2017’s Hot Thoughts (QRO review).

But while the group is working on some new songs, nothing has come out yet, so this show became a sort of ‘greatest hits’ from a band who have more great hits than you realized. There were older classics such as the cutting sounds of “Small Stakes”, “The Way We Get By”, and “Jonathon Fisk” off of 2002’s Kill the Moonlight, but also mid-career level-uppers like “Don’t You Evah”, “Don’t Make Me a Target”, and “The Underdog” off of 2007’s Ga Ga Ga Ga Ga (QRO review). They opened with “The Beast and Dragon, Adored” (2005’s Gimme Fiction), but also had “Do You” (2014’s They Want My Soul – QRO review).

And the crowd knew all the songs. From the first notes of “Beast”, the audience was into being back into live music. Spoon was kind of the perfect act to return to going to shows, someone you know well, with a deep catalogue of songs, and are sure to deliver. Maybe they didn’t play your obscure deep cut favorite (any city could use “Chicago at Night” from 2001’s Girls Can Tell, but they also didn’t give Soul’s “New York Kiss”), but huge cheers for “The Underdog”. And there was a killer build-up at the start of “I Turn My Camera On” between frontman Britt Daniel and guitarist Gerardo Larios, plus a spotlight on drummer Jim Eno for his own breakdown.

Oh, and Daniel brought a few of those new songs they’d been working on. Mid-set was the chiller, sadder “My Babe”. In the encore return, first it was just Daniel on vocals & Larios on piano to start their cover John Lennon’s touching “Isolation”, before the rest of the band joined in. And then came another brand new song, the jaunty “Hardest Cut”.

Even as touring kicked up in the late summer-into-fall, the touring hiatus late fall-into-winter looms, with most American acts getting off the road from Thanksgiving into the new year (hopefully Boris Johnson won’t mess up the U.K.’s great pre-Christmas tours). So, if an act you like is on the road right now, get out there and see them while you can. It’s a great window for great acts like Spoon.