There are some acts you could see a hundred times, and never get sick of. Acts like Spoon.... 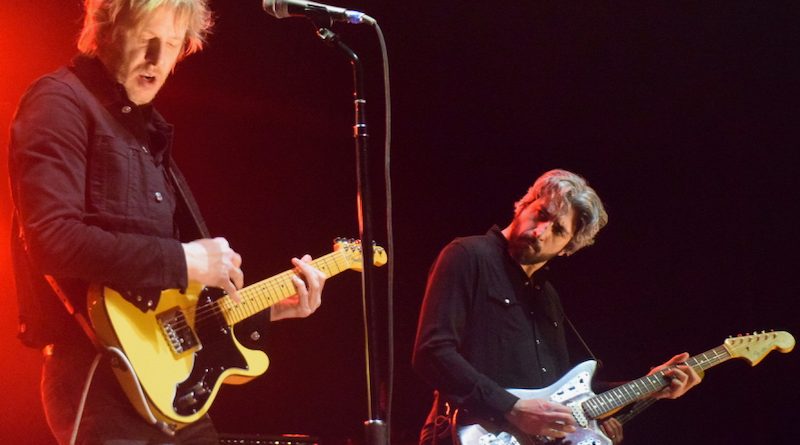 Click here for all of QRO’s coverage of Spoon in QRO’s ‘Spotlight On : Spoon’ feature

There are some acts you could see a hundred times, and never get sick of. They’ve got an extensive, varied catalog of songs, ranging from the old classics to great new albums (and a lot of deep cuts). They’ve got an electric live show. They tour a bunch. They’re great folks who love playing live. Acts like Spoon, who killed it at New York City’s Hammerstein Ballroom on Friday, May 6th.

Now is a bit of an inauspicious time for touring, between war overseas, the civil rights setbacks at home, and COVID everywhere. Indeed, this show had been rescheduled from a few weeks prior, when there was a COVID positive test in the group just before they were going to appear on Late Show with Stephen Colbert. To top it off, it was a rainy night, umbrellas up as fans were wading through security outside Hammerstein (QRO venue review) to get in.

But you can’t keep a good Spoon in the drawer. Touring off of February’s Lucifer On the Sofa (QRO review), it actually hadn’t been that long since the Austin group had been in the Big Apple, having played Brooklyn only last fall (QRO live review). But that was the ‘we finally get to tour again during this window between COVID variants’ tour, whereas this one was for Lucifer. And Lucifer did get displayed, from the dark opener “Held” to single “The Hardest Cut” (QRO review) and into encore break “Wild”. It can sometimes feel indulgent by a band to insist on playing the new stuff, especially when they’ve got such great old stuff (as Spoon has), but it is really true that hearing the songs live lifts them, such as with “Held” and “Wild”.

Also, it’s not like Spoon shorted the Hammerstein crowd on the oldies. Of course, what one defines as ‘oldie’ shifts as the band actually gets older, and puts out more & more great records. Once upon a time, songs like “Do I Have I To Talk You Into It” from 2017’s Hot Thoughts (QRO review), “Do You” from 2014’s They Want My Soul (QRO review), or “The Mystery Zone” from 2010’s Transference (QRO review) were new songs, but by now they’ve attained veteran status on a Spoon set list, beside such long-time classics as “The Beast and Dragon, Adored” (2005’s Gimme Fiction), “The Way We Get By” (2002’s Kill the Moonlight), or “The Fitted Shirt” (2001’s Girls Can Tell).

And then there’s “The Underdog”, from 2007’s Ga Ga Ga Ga Ga (QRO review), the closest Spoon has had to a ‘big hit,’ and it’s still as good as when it got you into Spoon. It was no easy thing, translating the piece’s original horns onto the keyboard, but guitarist/keyboardist Alex Fischel (QRO interview) has pulled it off. Fischel was particularly animated throughout the night (frontman Britt Daniel is more the cool cat of the group), whether on keys or let out to play guitar – or both, as on “The Underdog”, flipping the guitar he used in the verse onto his back when he got on keys for the chorus, its head bouncing up and down.

And it should be noted that Spoon don’t just play their own great songs. As in last fall, the encore was begun with John Lennon’s “Isolation”, at first just Daniel & Fischel. Later in the encore, Daniel brought out opener Margaret Glaspy (QRO photos) to join him for Richard & Linda Thompson’s “I Want to See the Bright Lights Tonight”. And at the end of the evening came the real bonus surprise, as Daniel brought none other than Dan Boeckner. Best known for co-fronting Montreal’s alt-rock Wolf Parade, Boeckner had also once teamed up with Daniel for their side-super-group Divine Fits (indeed, that’s where Daniel first met Fischel, later recruiting him for Spoon proper). Plus, Boeckner is currently touring as part of the band for none other than Montreal’s massive alt-hit, Arcade Fire, who were in NYC to play Saturday Night Live the next night (their own new record, WE, came out that day). Thus, Boeckner was in town and available (something that wouldn’t have been the case, had the show happened at its original April date). Daniel brought Boeckner on for him + Spoon to play Wolf Parade’s breakthrough “Modern World” (no Divine Fits, though), and Boeckner stayed on for the evening’s closer, new classic Spoon “The Rent I Pay”.

The last night of this leg of the tour, Spoon next head out west at the end of May into June, with more dates in July, August, and September. Because it’s always a good time to catch this great band.