If you were at The Tabernacle in Atlanta, as LA’s demagogic X opened for London’s soigné Squeeze, you had a fugitive chance to spectate as quirky British powerpop met... 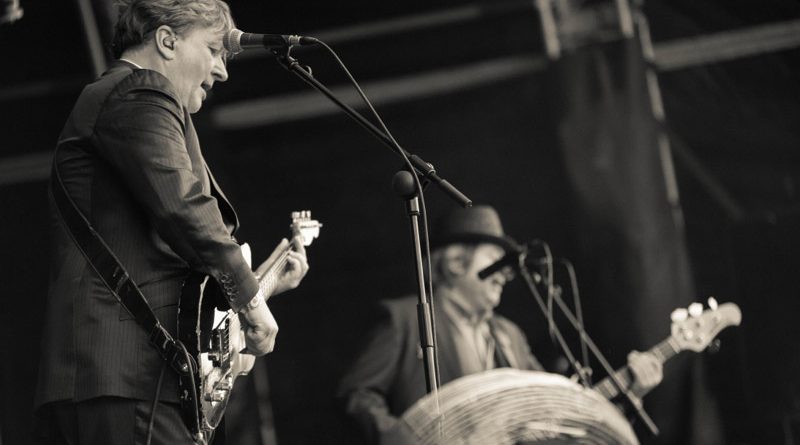 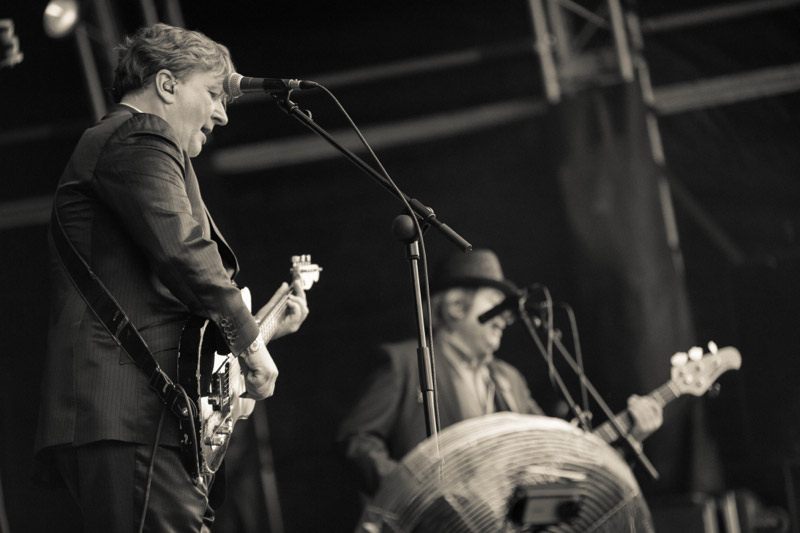 There is a rather damning dearth of authoritative tunesmiths in the world of music today, and goodness knows there can never be nearly as many leery punk pantheists as our contemporary social hygiene would seem to necessitate. However, if you were at The Tabernacle in Atlanta, Georgia on Sunday, September 22nd, as LA’s demagogic X opened for London’s soigné Squeeze, you had a fugitive chance to spectate as quirky British powerpop met chippy L.A. punk-a-billy head-on – and the resulting collision was both wistful and wicked. If you have the opportunity to mosey out to the portion of Squeeze’s 45th anniversary ‘Difford and Tilbrook Songbook Tour’ wherein X is in residency as the opener, you are in for a gloriously crossbred study in mongrel sound inversions. In X you have a celebrated punk band that has stood in defiant dissidence against all things pop-tainted (including capitalism) since 1977. In Squeeze you find their penumbral antithesis, the porcelain politesse of England’s early 1980s New Romantic element, compatriots in place if not practice of bands like Ultravox and Soft Cell, and widely regarded in musical histology as having emanated (sleek as new money) out of London as a direct counterbalance to that city’s own infamous punk movement.

Both bands bring a buxom bifocal approach to their songwriting. On one side you have the gumption of John Doe and Exene Cervenka, a male/female pairing that churns out lyrics which remain likewise hetero, and almost Beat-era, in nature and style. On the other side you have Chris Difford and Glenn Tilbrook, for whom continuous comparisons to other purposefully-palatable male/male songwriting duos, such as Bernie Taupin and Elton John, are accurate and apt. You get L.A. versus London. You get all original members present versus only two founding members in tow. Squeeze creates paper sounds and carves them in concrete. X spawns graffitied cement earworms and plasters them in protest posters.

What L.A. and London did decidedly share in the ‘70s was a genre of street grit that grew out of disarming adolescent angst, and threw wily roots out underneath unpredictable plains of popular culture that reverberate with the monopoly of its power to this day. What Squeeze and X had in common artistically was a formative proving ground of connatural eclecticism that would go on to inform both bands in legacy and in current presentation. Both bands represent something almost hereditary about the places that made them. The crowd that showed up to see them in Atlanta was deviant and delightful in that stately way charged by the devotion and primacy of a lifetime spent loving a pseudo-underground band – and doing that largely in a time when you did not need a t-shirt to prove your allegiance. Even in their ‘underground’ status, X and Squeeze were photonegatives of one another. X did it like The Plasmatics. Squeeze did it like R.E.M. It was heavenly to see that nearly everyone present was over 40, and they still liked their clothes crunchy and their mainstream acceptance dilatory, no matter which of the twain they were there most to see.

Click here for QRO’s review of X at Terminal West in Atlanta on September 9th, 2015

X’s still-nubile Cervenka, at a 63 that could almost read as callow, comes across as the girl who broke every rule but expects you to arbitrarily obey all of hers in every scenario, and without question or hesitation. Especially when shrilly intonating an X classic such as “You’re Phone’s Off The Hook, But You’re Not” like the agitator virago that she is, her firebrand virulence still curls like the eternal Elvis-snarl of her upper lip, and all of this is darling rather than petulant because it is not a pose; she means it. No contemporary band could even get away with writing a song as unpasteurized and honest as “White Girl” in modern America today. The X of 2019 still feathers you with an atmosphere lusciously free of fascist P.C. censorship. The husky accomplishment in that feat stems from X’s ability to do this with a degree of trad emotional fluency that will resonate with any listener of whatever age – even those who might be inclined to seek a ‘safe space’ after listening to a starkly unretouched song like “Adult Books”.

Cervenka still nobly rocks her crimped bangs and coltish legs. She still twirls her skirts while Doe is singing like a bored hellion-ambassadress of dissension. “I Must Not Think Bad Thoughts” was received by the solicitous audience very like a shrewd solatium for their bureaucratic misgivings, no matter where they fell on the amalgamated political Richter scale – and it was hope forming to see that there were, in fact, expounders of both extremes in attendance. But then, real punk rock was always about allowing for harmonious disharmony, wasn’t it? Covering “Soul Kitchen” by The Doors as their final song of the night – which stands to reason as Ray Manzarek produced their acclaimed first album, Los Angeles (QRO photos of X playing Los Angeles in Los Angeles, with Ray Manzarek), and they retain an admirable dose of Doors-esque voodoo of their own – X will remind you that they were never the type to just wear the t-shirt.

Saving the stentorian “Take Me I’m Yours” (their first release in 1978) for song #1 of the encore, Squeeze led their compact chunk of the show with a capering swan dive into “Footprints”, the second cut from 1987’s Babylon and On. Lifetime Squeeze lyricist, Chris Difford, the man responsible for all of that ginger wordsharping that makes this band so universally appealing, is still the quiet one who never really planned to be a front-facing fixture in the group. Glenn Tilbrook, the scriptor of the music accompanying Difford’s waggish versification all these years, still has the kindest smile in synthpop history, and it is still warmly tinged with a healthy rank-and-file roguery. The signature British New Wave trench coats and flocculent hair may have been replaced by forgiving all-black silks, but all of the reasons these two were infamously dubbed the Lennon/McCartney of South London are still very much on display.

Squeeze’s landmark fourth album East Side Story (1981) did not make an appearance until ten songs in with an unswerving retelling of “Someone Else’s Heart”, though the appetence of the audience was unaffected by this wait. You got the impression Squeeze was playing for Squeeze these days, and that everybody who loved them was fully on board for whatever kind of party they wanted to have. When you name your band after a Velvet Underground album that met with impassioned critical backlash, you clearly have no problem playing ‘advocatus diaboli’ with the public’s expectations. This tack has worked wondrously well for Squeeze as it has disallowed even their quieter years, breakups, and less behemoth releases from making muzzling tactics out of their eccentricities. With English reticence cranked to eleven and stage banter kept nearly non-existent, Difford and Tilbrook squired a taut 20-song set of 90 minutes. “Cool For Cats” is every bit as full of Madness-like ska-bounce as you remember, and somehow the imposter geniality of the whirligig melody encasing lyrics about unidentifiable rashes and blackout benders comes across as even funnier and truer now that everyone painting this slapstick portrait is singing it with the benefit of maturity’s 20/20 vision.

Squeeze is often oddly bucketed with early 1980s dreampop groups such as Thompson Twins or O.M.D. simply because of the time frame in which “Tempted”, their most ubiquitous hit, was released. Interestingly, that wizard curiosity of a gem never charted in America at all, though it would undoubtedly be the Squeeze song that your average Joe is most likely to recognize on any given street on either side of the pond. The fact that the immortal Paul Carrack, also of Ace and Mike + The Mechanics, and known as the ‘man with the golden voice,’ sang the recorded version of that song sometimes fails to remind lazy labelers of just how deeply rooted in 1970s soul the Squeeze boys have always been. Seeing Squeeze perform a song like “Pulling Mussels (From the Shell)” live, you can become quickly conquered by the smoldering literacy implicit in lyrics that nonchalantly reference William Tell and Maid Marian, and you also fully fathom that the real enchantment of their covey lies in the fact that they maintained the granola-esque ‘70s accentuation of musical chops while slyly hybridizing the ‘80s tendency to underscore humor. This represents a type of inventive thaumaturgy not likely to emerge again in so slick a handicrafter form as we continuously move toward a society that wants everything to be one, homogenized, logo-centric product, complete with pre-sanctioned barcode. Like their fundamentally gratifying prize song that they saved for the final piece of their encore, “Black Coffee in Bed”, which reads like a suicide note but sounds like a knavish playground paean to moving on with your ex-lover’s friend, Squeeze does not allow you to falsely silo incompatible human emotions and thus remains the best sonic insignia of said emotions you will encounter in a day’s walk.

I have always scowl-cringed at the notion that any band of true cultural significance could ever be called a “heritage act,” or the idea that there could be anything post hoc about the artisanal. It implies that there could ever be a season to great art, which seems criminally misguided and counterintuitive to the very definition of art in general, but certainly to art that has successfully moved the needle of our ever-shrinking culture-o-meter. X is as punk and rockabilly as they have ever been. Squeeze is still carbonated cheer that can stay the executioner on your darker days. X brings you lyrics you feel could have been plagiarized from Bukowski’s secret journals, and Squeeze makes you realize that the most germane phrase can become your soldier stanza under the right vocal light. Nothing about that unspeakably rare skill set or its initial impact could ever have an expiration date or go out of style. What you get out of going to see a tour like this is not just the remembrance of what these bands gave when they first brought their ‘wild gifts’ to the table, but the inexhaustible and far-reaching manner in which the work of song specialists of this caliber permeates nearly everything you hear touted as modish on the radio today.

Princess Goes To The Butterfly Museum