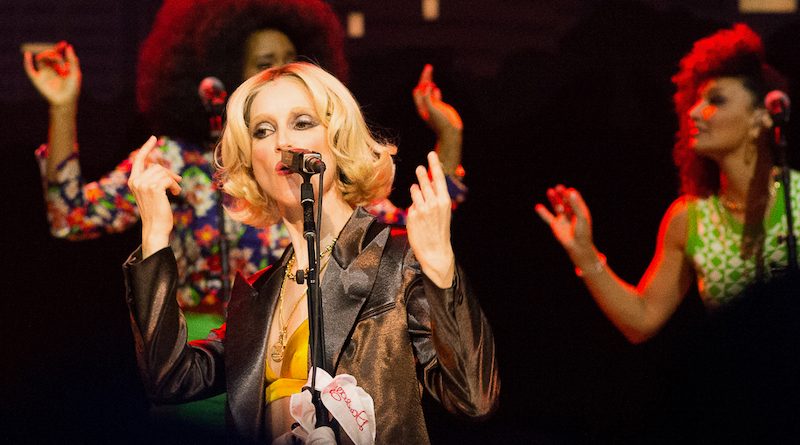 St. Vincent has wasted no time returning to an exhaustive touring schedule in support of her new album, Daddy’s Home (QRO review). Having played a packed month of shows during September, including Pitchfork (QRO photos) and Life is Beautiful Music Festivals, the tour landed and lingered in Austin with multiple shows, including a prominent spot at the Austin City Limits Festival. First up was an Austin City Limits TV taping on Thursday, September 20th. Celebrating its 47th anniversary on the air, Austinites were pleased to return to a yearly ritual on hold during the pandemic.

Dressed in white leather and looking like a blonde flight attendant, the artist entered the stage with her signature white Sterling by Music Man strapped across her shoulder. Supported by voluptuous ‘60s style backup singers, St. Vincent kicked off the set with “Digital Witness” before “Down” from the latest album. It was noticeable that this wasn’t quite a normal show with the band spread widely across the stage and the less-than-capacity crowd for this popular artist.

St. Vincent has an unmistakable Annie Lennox vibe on stage – sturdy with an intense stare, almost a little detached. So, it was against this facade that her dramatic arm movements and diva vocals were really punctuated. Her emotive voice captivated the audience especially during “New York”, her heartfelt song about the loss of David Bowie. She had some rocking moments too, dueling with her guitarist towards the end of the set.