Annie Clark’s ascendancy as St. Vincent has been something to behold – quite literally.... 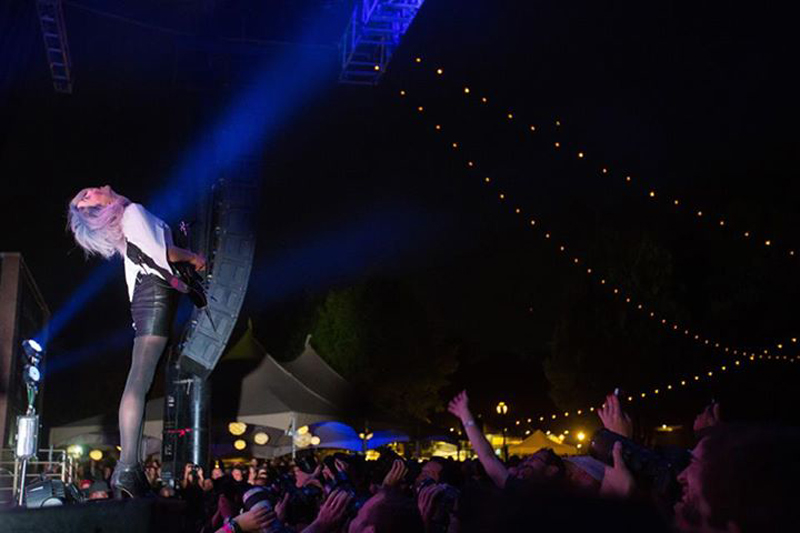 Annie Clark’s ascendancy as St. Vincent has been something to behold – quite literally. From her early days as Polyphonic Spree guitarist going solo (after Spree’s 2007 The Fragile Army – QRO review), Clark (QRO interview back then) has elevated to indie-rock stardom. And she hit a new high when she closed out Celebrate Brooklyn!’s 2014 season at Prospect Park Bandshell (QRO venue review) on Saturday, August 9th. 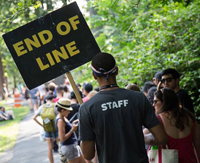 Before the evening began, lines wrapped out of both entrances for the show – but you knew that was coming. Clark has become not just an indie-rock star but also darling, garnering even more fans with this year’s self-titled release (QRO review). Not just Williamsburg hipsters but Park Slope ‘cool parents’ were out in force for the free show, whose audience reportedly reached 15,000. Inside, there were more lines for everything from drink to food to even (or especially) port-a-potties. The place even ran out of (Park Sloper) wine and (hipster) IPA early. 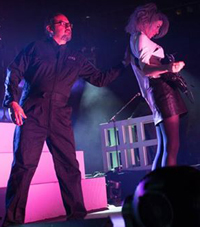 Clark’s show began like most of her shows on this year’s St. Vincent tour – but what a beginning! First coming out solo with robot/mannequin like moves, she then launched into “Rattlesnake” from the new album (though with a wardrobe fix to her mike pack on her back during the song). Every move Clark has made on this tour has been precise and choreographed – sometimes literally so, such as when she shared moves with bassist/keyboardist Toko Yasuda on certain songs (when done on Late Show with David Letterman, he remarked that at least some of it was “semaphore…”) such as the following “Digital Witness”. Clark’s died-grey hair reflected the lighting that came down upon her. 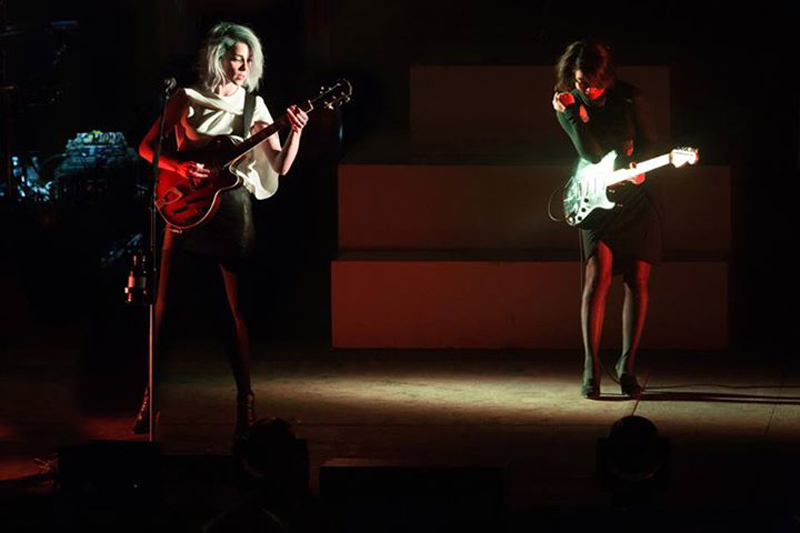 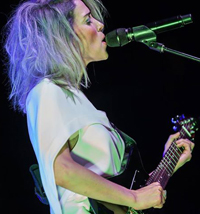 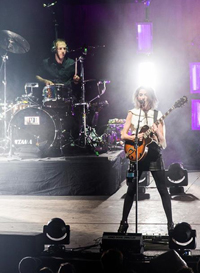 Admittedly, this was very much a show focused on the new record, comprising more than half of the set list and almost the entire album. And the calculation & size has taken away from Clark’s earlier, charming humor – her line welcoming everyone, including “the freaks and the others,” with references to the time/space continuum, “orgiastic,” gravity and more felt very ‘written beforehand.’ But given the immense size of the show, it would have been difficult to play it intimate. 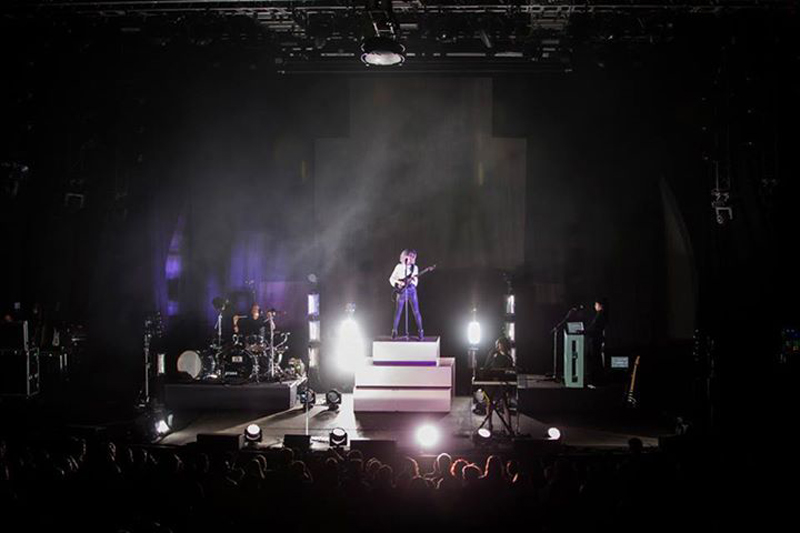 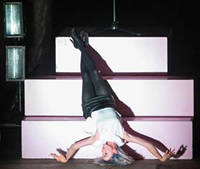 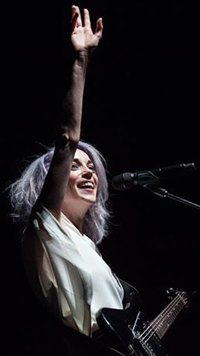 The multi-stepped pedestal behind Clark also played its thought-out role, with Clark singing “I Prefer Your Love” while sitting/standing/laying on the steps, and then playing from atop the pedestal for “Cheerleader” and “Prince Johnny” (another song of her about a “John”…), before slowly sliding down. She returned to the pedestal for her solo encore return, “Strange Mercy” (from the album of the same name – QRO review), but closed the night with full band on the evening’s only piece from her first record, Marry Me (QRO review), “Your Lips Are Red”, which was turned into a giant closing hurrah for the show & Celebrate Brooklyn! ’14.

Annie Clark has gotten very big, from making a record in 2012 with David Byrne, Love This Giant (QRO review – unfortunately none of it was featured that night, but that’s the kind of fate for most most-recent-but-one records on the next record’s tour), to being the first ‘guest bandleader’ the following Monday & Tuesday on Late Night with Seth Meyers (QRO Music On Late Night TV – filling in for Fred Armisen, off doing another season of Portlandia). All hail the beatified St. Vincent! 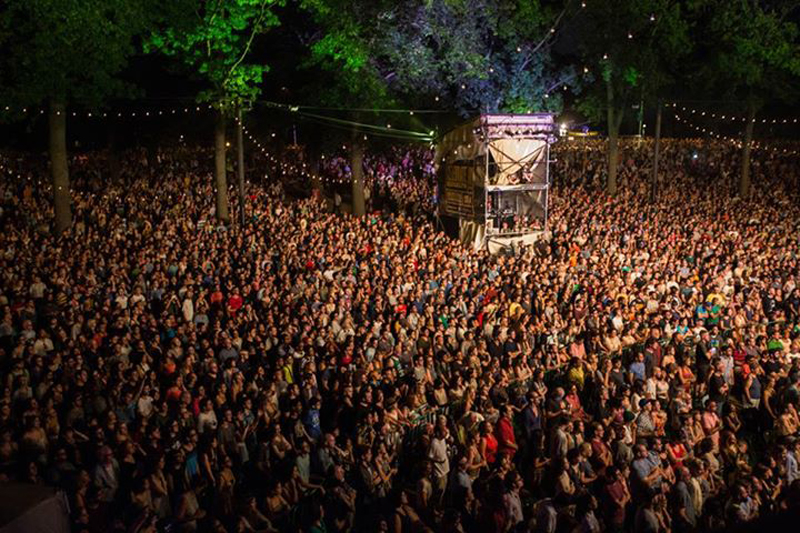 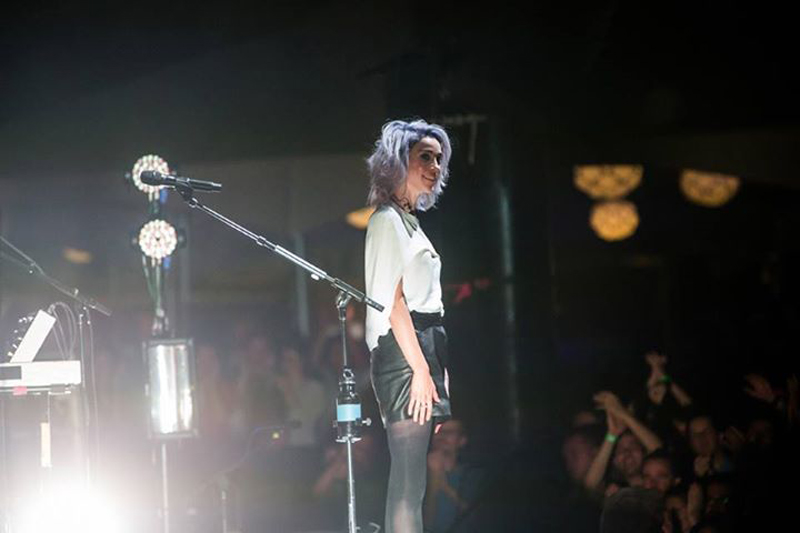