St. Vincent ever the perfectionist, wanted to get it all right for her ‘Down and Out Downtown’ via Moment House.... 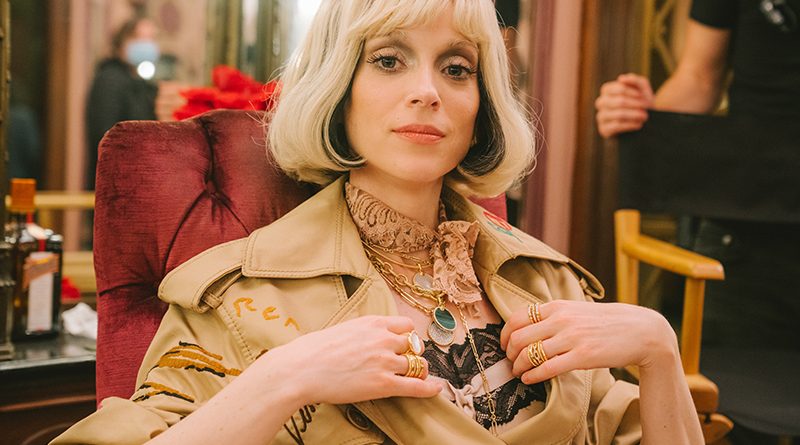 Click here all of QRO’s coverage of St. Vincent in QRO’s ‘Spotlight On : St. Vincent’ feature

It can seem like every musician has done a livestream during this last year-plus of lots of pandemic but no live shows, from early free Instagram livestreams on their phones to later professionally produced ticketed events on new livestream platforms. Indeed, it’s kind of surprising that Annie Clark, a.k.a. St. Vincent, hadn’t done one until now (if you don’t count her occasional ‘Sappy Hour’ IG chats), with her new record Daddy’s Home (QRO review) released back in May. But Clark, ever the perfectionist, wanted to get it all right for her ‘Down and Out Downtown’ on Wednesday, August 4th via Moment House.

This was not some regular concert done in front of cameras instead of fans, though did take place in an otherwise-empty Los Angeles Theatre. Clark has been carefully crafting her image for years now, usually changing album-to-album like a latter-day Bowie, and Daddy’s Home is her channeling the seventies, which she brought in spades to its livestream. It wasn’t just get-ups and hairstyles (multiple afros, while Clark went Studio 54-style platinum blonde), but the stream itself, broadcast like an old VHS cassette or episode of Soul Train, including the classic 4:3 aspect ratio. Maybe if you were casting this on your super-HD big screen, you would have wanted the twenty-first century on your feed, but for most it was a scene-setting throwback (even if you weren’t alive in the seventies, we’ve all seen the quality of footage that it produced).

This did mean that the concert wasn’t live, or certainly didn’t seem to be – especially as this was the first of four airings, scheduled for North & South America. The others ran on August 5th in Australia/New Zealand, Asia, and Europe/Africa, and it was an international audience in this stream’s chat, with much Spanish & Portuguese – one person even said they were watching from Antarctica! In whatever country/continent of origin, chat was psyched about the performance, and didn’t have the ‘my stream doesn’t work’ or ‘how do I cast this to another device?’ questions/complaints that have plagued most livestream chats. Admittedly, there many questions about the virtual afterparty, as those who bought tickets didn’t get a link, and some of those who did the stream didn’t automatically go over to the afterparty.

And the regular show was under an hour, but this wasn’t a ‘regular’ show. As carefully crafted as Clark’s records, this was more a special televised performance. One almost expected to see the network logo advertising that it was in technicolor – indeed, Clark shared a sneak peek with her performance of “Down” on The Tonight Show (with Jimmy Fallon…). It was directed by Bill Benz of Portlandia, who also directed the upcoming film The Nowhere Inn co-written by Clark. The only hint of this being a COVID-induced replacement for live music was that the Los Angeles Theatre was empty.

Naturally, the set list was dominated by Daddy’s Home, starting with its killer first single, “Pay Your Way In Pain” (QRO review). As when the single launched, it served well to let you know what you were in for, from the funky sounds & back-up singers to retro video quality. And those back-up singers were the secret MVPs of the performance (as noted in chat), Neka Hamilton, Nayanna Holley, and Sy Smith, forming the ‘Down and Out Downtown Band’ with keyboardist Rachel Eckroth, guitarist Jason Falkner, drummer Mark Guiliana, and bassist Justin Meldal-Johnsen.

Yet it was particularly interesting seeing Clark interpret her prior records through her current prism.  “Los Ageless” from 2017’s MASSEDUCTION (QRO review) got even more disco, while “Slow Disco”, done solo in front of a drawn stage curtain, was more akin to the reworked version on remix album MassEducation (QRO review). And though she was in Los Angeles, “New York” came out as well, but from the foyer, with just Clark & Eckroth on piano like old-time cabaret, while “Mass Seduction” was “recorded earlier” in what appeared to be their dressing room, just Clark & her back-up singer (if not appearing as spontaneous as it might have been intended). “Digital Witness” from 2014’s St. Vincent (QRO review) was funkified – “Yah!” Meanwhile, “Cheerleader” off of 2011’s Strange Mercy (QRO review) was done more like that record (though with Clark in the empty seats, facing her band), with its big size fitting in.

Of course, there were those in chat who wanted to throw back even further, like 2009’s Actor (QRO review) and even 2007 debut Marry Me (QRO review – which will always have a special place in your correspondent’s heart, since he got to interview Clark for it, before she was a star – QRO review). And the crafted nature of the not-live-show meant it didn’t have Clark’s great stage banter, though she did do some between-song jokes from the urinal (which looked about as clean as the seventies, and even had canned laughter). But this is the latest iteration of St. Vincent, and as much as you’ve always liked her previous incarnations, you’ve also always liked what she’s become next. And the divine Clark & The Down and Out Downtown Band will be on tour soon, including headlining Pitchfork Music Festival and even Radio City Music Hall (QRO review). Until then, fans around the world got a special Moment with her.

We Are Scientists – “Handshake Agreement”