While Annie Clark began in alt-rock circles, as St. Vincent she has grown into a profound, artistic musical force.... 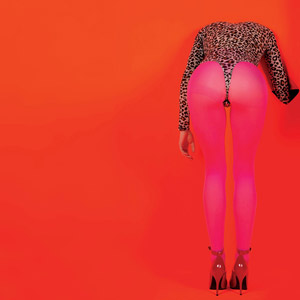 While Annie Clark began in alt-rock circles, as St. Vincent she has grown into a profound, artistic musical force. In some ways, her & her career have become more along the lines of New York wave of artistes in the late seventies/early eighties, Andy Warhol or Talking Heads (and she made a record with Heads’ David Byrne – QRO review). While this could and has been frustrating with other artists, all ego and remove from the masses, Clark has pulled it off, winning a Grammy in 2014 with her last, self-titled record (QRO review). For MASSEDUCTION, she goes even more into her artiste direction, eschewing her usual guitars for more of a tech-based sound – and pulls it off with aplomb, once again.

Unlike earlier times where Clark would get to “shred a little” (QRO interview), MASSEDUCTION relies primarily on manufactured beats & sounds, along with her always-powerful voice. The actually quite funny Clark uses this to mock our alienated world of “Pills” and robotic “Masseduction”, but also employs it to reflect being in that alienated world, from her take on love, life & Los Angeles in single “Los Ageless” to true, almost psychotic alienation in closer “Smoking Section”.

But there are also pieces where Clark flips the other way, towards much older instrumentation. “Happy Birthday, Johnny” is piano-sad torch for a friend whose own alienation drove him to the streets. “New York” gets its own tribute, a wry but heartfelt take on the city and leaving it, but primarily focused on being left behind as others leave, like the lover the song is addressed to (or maybe it’s about the Big Apple losing people who made New York, New York, such as David Bowie). And the penultimate “Slow Disco” is strings-led orchestral art.

It could have been very frustrating, Clark going all ‘artsy artiste’, ‘if you don’t get it then that’s your fault’ kind of egoism – especially as she’s been such a funny and engaging presence on stage (QRO live review). But with MASSEDUCTION, St. Vincent manages to be artistic about alienation without being alienating, thanks to her power, skill, and that undercurrent of accessibility.