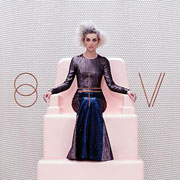 Things have just been getting bigger & bigger for Annie Clark (QRO interview), a.k.a. St. Vincent.  2012 saw her team up with alt-icon David Byrne for Love This Giant (QRO review) and big tour (QRO photos).  Last year she signed to a major label, Republic (part of Universal).  2014 has already seen her get the ‘Colbert Bump’ by appearing & performing on The Colbert Report and the show after, @Midnight (QRO Music on Late Night TV).  But all those good times also meant that a backlash could have loomed for her next record, a-la Arcade Fire doing all sorts of ‘we’re huge’ things with Rephlektor (QRO review).  Yet the divine Ms. Clark completely delivers on big art-rock with St. Vincent.

Clark definitely seemed to have picked up some things from her time with Byrne, as St. Vincent has more angular, stop-start art-rock moments that your favorite Talking Head is known for, starting right off with opener “Rattlesnake”.  But Clark is really able to make the hard-to-get-right sound right, including world music elements, by often marrying it to a cheer that you might not expect, but certainly enjoy, on pieces such as “Rattlesnake”, single “Digital Witness”, and “Bring Me Your Loves”.  There are also sadder moments, where she also pulls it off, like the empty hall of “Prince Johnny”, not to mention higher glow in “Psychopath”.  The slow and smooth “I Prefer Your Love” in particular is a nice change on the album.

There aren’t many more heights that Annie Clark has left to climb (save for actually ‘winning the internet’ on @Midnight, which happened the night after Clark appeared there to fellow songstress Neko Case – QRO live review), but what’s most impressive isn’t how big she’s gotten, but how good she’s stayed.