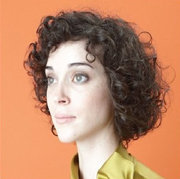 Though she first got notice for her work as part of the massive Polyphonic Spree on The Fragile Army (QRO review) in 2006, Annie Clark broke out in a huge way the following year as St. Vincent with Marry Me (QRO review), a both enchanting and eye-opening solo debut full-length, often evoking the feeling of occupied Paris during the war.  After many plaudits came many tours (QRO live review), with Clark solidifying her backing band (including multi-instrumentalist Daniel Hart, a.k.a. The Physics of Meaning – QRO album review).  Following-up such success and love is not an easy task, with fears of ‘sophomore jinx’ and retreads in the back of one’s mind.  Clark has confronted this by becoming even more ambitious on Actor, perhaps too ambitious for such an already far-reaching artist.  But even though the new record is not as strong as the old, it’s still something that can stand on its own.

After all the smooth, charming beauty of Marry Me, Clark seems to have gone the other direction in what new elements that she has added, bringing not only a cranky thrash at points, but also fuzzed up portions and beats.  While interesting, such components aren’t integrated enough into her otherwise so soft, so different material.  The bright brook-twinkle of opener “The Strangers”, for instance, goes thrashy two-thirds of the way in, while the harder moments of the over-fuzzed piano bar grand “The Neighbors” don’t quite fit in.  It all comes to a head (or a bottom, rather), with “Marrow” – techtronic with loud moments, it’s not what one is looking for from St. Vincent.

Click here for photos of St. Vincent at SXSW 2009 in Austin, TX in the QRO Concert Photo Gallery

Click here for QRO’s review of St. Vincent at Music Hall in Williamsburg in Brooklyn, NY on February 28th, 2008

Click here for photos of St. Vincent at Bowery Ballroom in New York, NY on July 17th, 2007 in the QRO Concert Photo Gallery

That all being said, there are tracks where Clark squares her new circle, most notably with single/semi-title track “Actor Out of Work”, whose great driving press is wonderfully married to both Clark’s fuzz and orchestrated skill.  The rhythm-focused second track, “Save Me From What I Want”, nicely puts together the fuzzed beat and high beauty, while the penultimate “Just the Same But Brand New” matches an airy, floating first half with crashing percussion in its second, like before and after a thunderstorm.

There are also some tracks, especially in the second half of Actor, where Clark stays away from the fuzz & thrash, but even there, she goes grander – and louder – in her orchestral work.  Unfortunately, such tracks like that as “The Bed”, “The Party”, and strings-based closer “The Sequel” (note to Clark: less “The” songs on the next record…) are a touch forgettable, when compared to harder-rocking pieces earlier in the album.  Instead, it is the relaxed and smooth “Laughing With a Mouth of Blood” which stands out on the back half of Actor, well married to Clark’s orchestral beauty.

These different uppings in volume also can overshadow Clark’s voice and lyrics, which were so captivating on Marry Me, but now relegating into the back the straight-faced dark lyrics of “The Strangers” in its last third, or all words throughout “The Bed”.  Clark’s vocals and personality are such a winner live (QRO review), it’s a bit too bad she instead went for her own favorite piece of her live show, “where I can shred a little” (QRO interview), to add to Actor (though this does probably mean pieces like even “Marrow” are stronger, live).  But you want to see an artist growing, something that often doesn’t happen after a record as well received as Marry Me was [cough-The Strokes-cough].  And though Clark doesn’t make all the right choices, she’s hardly out of work.