<img src="https://www.qromag.com/wp-content/uploads/2011/10/stvincentstrangemercy.jpg" alt="St. Vincent : Strange Mercy" /><br /> St. Vincent goes into the twenty-first century, even if you'd rather enjoy the grace of the past. ... 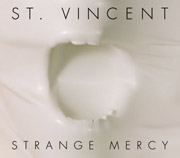 Since leaving the ensembles behind and breaking out on her own as St. Vincent, Annie Clark (QRO interview) has made a serious splash in the alt-world.  2007 debut Marry Me (QRO review) brought her stunning voice to the world, mixing the wartime cabaret with modern indie, and 2009 follow-up Actor (QRO review) added some "shred" to it.  Clark has quickly moved from ensemble role player to one of the leading ladies in today’s indie-classical scene.  For third LP Strange Mercy, she strips away some of the shred of Actor, but adds a tech-stop to her Marry base, taking St. Vincent into the twenty-first century, even if you’d rather enjoy the grace of the past.

When indietronica & alt-country got big a few years ago, there were artists who tried to merge the two seemingly opposing strands.  Now it’s indie-classical and tech-stop that are all the rage, and there are artists trying to marry those two.  Most notable has been Sufjan Stevens (QRO live review) on this year’s The Age of Adz (QRO review), and now Clark (who was once in Stevens’ touring ensemble).  This is a trickier combo than indietronica/alt-country, since both indie-classical and tech-stop are more complicated styles of music, and both can more easily go off the rails into too-far experimentation.  Strange Mercy doesn’t do that, but Clark’s indie-classical strength can only highlight which of two strains feels unnecessary, even intrusive.

Opener "Chloe In the Afternoon" on forward, Clark puts her choral vocals above tech-stop instrumentation.  It does improve as the record goes on, but also blends a little too easily, one track to the next, especially in the middle.  The finest pieces lie near the end of Mercy, like the lost diva of "Champagne Year" or the slightly cartoon/Fantasia-ish twinkle-pressure on "Hysterical Strength".  "Dilettante" reminds of Marry Me‘s excellent title track, but then in comparison also feels a bit marred by the new tech-stop.  Still, the album ends strong with "Year of the Tiger", with better St. Vincent above and underneath (and is also possibly the best China vs. America song of this emerging bilateral century).

It always feels a bit churlish to criticize an artist for growing and attempting new things.  Annie Clark hasn’t lost what made St. Vincent great, that lovely, tragic flare from the past, but the twenty-first century tech-stop additions on Strange Mercy aren’t meshed quite well enough in what would be a hard task.  With St. Vincent, it’s hard not to still be in love with the past.

MP3 Stream: "Year of the Tiger"